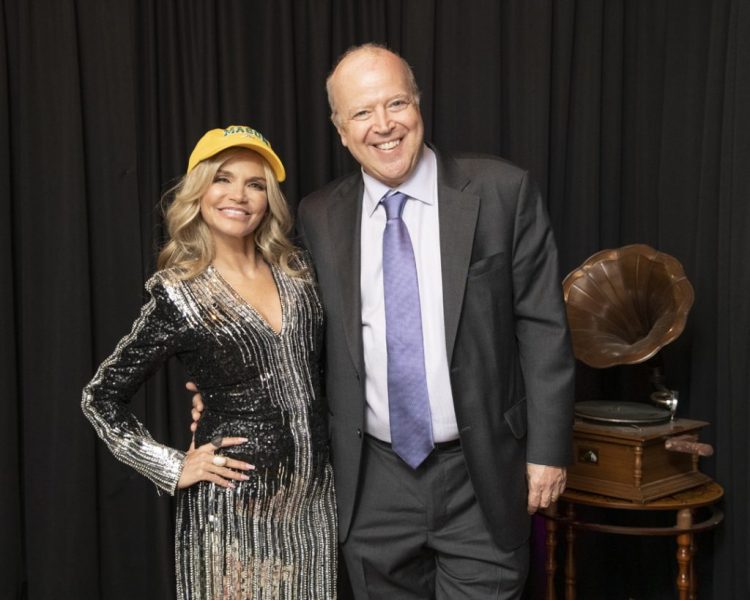 Kristin Chenowith and Rick Davis, Dean of the College of Visual and Performing Arts. Photo by Cable Risdon Photography.

“ARTS by George!” is the annual fundraiser held by George Mason University to raise money for scholarships and to support the arts. This extravagant event consisted of three main parts—the pre-show reception, a live auction, and the main attraction: Kristin Chenoweth live in concert.

Some people are meant to perform, Kristin Chenoweth was born for it.

The reception took place across the campus’s multiple arts buildings. Each one featured impressive student performances. From dancing to musical theater, to film, to video game development, to graduate opera performers, there was no shortage of entertainment for the prospective donors. I spoke to opera students Rosalyn and Madeline about the event. They described it as a highly anticipated, glamorous event that many students look forward to. It offers them the chance to perform in front of highly respected members of the community. “ARTS by George!” also fosters a sense of collaboration and community among the students. The opera performers had clear consonants, infectious energy, and resonant, dynamic sound. I truly enjoyed touring the facility and watching the numerous performances.

At 7:30 pm, the crowd made their way into the theater for the auction. The ticket items were sold efficiently, with most of the money donated to the fund-a-student program. Donors contributed from $100 to $2,500 to help the George Mason artists afford their education. The joviality whipped up by the auctioneer had the room buzzing. Patrons and audience members chatted amongst themselves about the contributions made toward higher education. (The event raised approximately $250,000 for student scholarships in visual arts, dance, music, theater, game design, film, arts management, as well as for the Mason Community Arts Academy, Green Machine Ensembles, and the Great Performances at Mason season at the Center for the Arts.)

Then the lights dimmed.

It seemed as if all the air had been sucked out of the room. Not a single person dared to even blink as the pianist and guitarist took their seats. Click, click click. As the sound of high heels grew closer, I could feel the energy of the room pull taught. There, in a glittering champagne pink dress with blonde hair curled and matching sparkling pink shoes, stood Emmy®and Tony Award-winner, Kristin Chenoweth. The room erupted with cheers and proclamations of adoration before a single note had been sung. Then she began to sing from her album, For the Girls, a heartfelt tribute to the great female singers throughout time. As the first note rang out, I watched as she became enraptured by the music and poured her heart into every song. Kristin invited her backup singers to join her for “You Don’t Own Me” which featured captivating three-part harmonies and graceful dance movements. All three women cheered each other on and built upon the energy in the room. Kristin showcased her talent as a singer and a leader of the arts as she performed alongside some truly impressive vocalists. She then thanked the audience for their enthusiasm, expressing her gratitude at finally being able to perform again after the hardships of the pandemic. At the height of COVID-19, she would watch the news but when that got too depressing or stressful, she would switch to “Real Housewives.” She knew what many of the songs on her album meant to her when she recorded in 2019. The pandemic forced many people to reconsider their lives and what they held dear. None of her interpretations had been so changed as her next song, Chenoweth revealed, as she lifted her head high. Her melodic soprano rang out with the opening of “Memory” from “Cats.” I always knew Kristin Chenoweth was an extraordinary performer, yet I couldn’t help but be amazed as she effortlessly shifted back and forth from teasing laughter to somber intimacy.

As she seamlessly transitioned from song to song, Chenoweth revealed stories about her life to the audience. Some were fun such as picking a tribute to Judy Garland because they were both 4’11,” but really ‘with the hair and the heels [she’s] 5’1”’ the singer joked cheekily. Others were prefaced with stories about her love for her parents. Before an enrapturing, heartbreaking rendition of  “Bring Him Home,”  from “Les Misérables,” Chenoweth proclaimed her desire for everyone to start “accepting people where they are.” The singer exuded constant charisma on stage and her playful energy seemed to pour out of her. She didn’t hesitate to engage the audience even as she forgot some of the lyrics to “Desperado.” Ever the professional, Chenoweth took the mishap in stride with a smile and kept going. It is safe to say she had the audience eating out of the palm of her hand. During a few songs, she even encouraged the audience to sing along. While her dress, shoes, and microphone dazzled under the lights, nothing shone as brightly as Kristin Chenoweth. It was clear that the audience enjoyed themselves throughout the night. Constant laughter, cheering and applause could be heard as she worked the crowd. Nothing could compare to the screams from the audience as she began her classic hit “Popular” from the musical “Wicked” in which she originated the role of Glinda the Good Witch. She revealed that she has been frequently asked about her feelings on the song and whether she enjoys singing it nearly 20 years since the show’s opening—she declared she would perform it until the day she died and was proud and honored to have something that was uniquely hers. To this day, no one can sing that song without being compared to Kristin’s unrivaled talent on stage.

Some people are meant to perform, Kristin Chenoweth was born for it. A genuinely phenomenal performer, she had an effortless way of taking a room filled with hundreds of strangers and making them feel as though they were her closest friends and family.