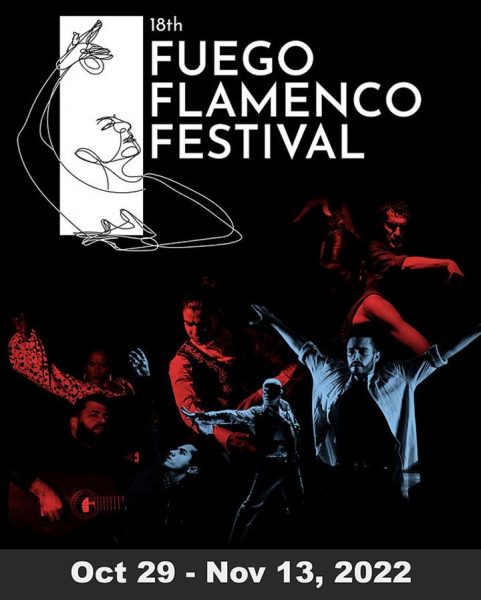 Washington, D.C. – GALA continues a beloved staple of each season with the 18th international Fuego Flamenco Festival, bringing leading flamenco artists from Spain and the United States to Washington audiences. Renowned for presenting stellar artists in an intimate tablao setting, this year’s festival will run for three weeks from October 29 through November 13, 2022 at the GALA Theatre, 3333 14th Street, NW, one block from the Columbia Heights metro station on the Green/Yellow lines. Parking is available behind the theater at the Giant Food garage for a rate of $4 with validation at GALA.

Fuego Flamenco XVIII is an exploration of traditional flamenco and its breadth and diversity through contemporary expressions. This year’s expanded program opens with the GALA debut of New Mexico-based Entreflamenco with Cerrando el círculo by Spanish Flamenco bailaor Antonio Granjero. This riveting company is followed by Flamenco Men, performed and choreographed by Salvadoran artist Edwin Aparicio of DC-based Flamenco Aparicio Dance Company, which explores the masculine energy and style of Flamenco. The festival closes with Alejandra, a captivating piece with powerful dancing by Lucía Ruibal that pays homage to guitarist José Almarcha’s late mother. Alejandra is presented in collaboration with Flamenco Spain Arts and Culture and FECACE.

The festival program also includes Flamenco en familia, presenting free interactive demonstrations of various aspects of flamenco for children, and families and Student Matinee performances of Los colores del flamenco on November 2 and 3 at 10:30 am. Both programs feature Sara Jerez and guitarist Ricardo Marlow. For more information about the student matinees, email education@galatheatre.org.

Press Night and Artist Reception for Flamenco Men is Friday, November 4 at 8 pm.

Press Night and Artist Reception for Alejandra is Friday, November 11 at 8 pm.

Antonio Granjero (Choreographer, Director, Dancer) began his dance studies at age 10 with Fernando Belmonte and Paco del Río. Under these masters, he performed with Ballet Albarizuela as principal male dancer for the visit of Queen Elizabeth II of England and King Juan Carlos I of Spain. He has performed in Spain, Israel, France, Germany, Italy, England, Switzerland, and Japan. In the United States, he has served as choreographer and soloist with María Benitez Teatro Flamenco appearing at the Boston Pops, Jacob’s Pillow, and has been recognized as the “Baryshnikov of Spanish Dance” by The New York Times. He has also performed as a guest artist with the Seattle Opera, the Portland Opera, and most recently with Soledad Barrio + Noche Flamenca, with whom he has been nominated for a 2022 Bessie Award for Outstanding Performer. He resides in Santa Fe, NM, where he directs El Flamenco Spanish Cabaret.

Estefania Ramírez (Dancer) debuted at 17 years old as a dancer at the Royal Albert Hall, London, England. She has toured throughout North America, Germany, Mexico, Panama, Colombia and nationally with the Pablo Rodarte’s Dance España and Carlota Santana Flamenco Vivo. She has also appeared with Maria Benitez Teatro Flamenco at Jacob’s Pillow Dance Festival, and PBS’s Evening at the Pops. She studied extensively with Mario Maya, Jose Galván, and Javier Cruz. She worked as a dance professor and movement theory specialist for the Spanish Ministry of Culture and Education, creating K-9 dance curriculum for public schools in Spain. She is the co-director of Entreflamenco and El Flamenco Cabaret in Santa Fe, NM.

Entreflamenco was founded in 1998 by Artistic Director Antonio Granjero in Madrid. Since 2011, it has resided in New Mexico, performing, and providing educational programming such as El Flamenco Spanish Cabaret, a venue that offers performances, outreach classes and cultural activities, located on the historic plaza in Santa Fe. Entreflamenco is the recipient a 2017 Mayor’s Arts Award from the City of Santa Fe.

Edwin Aparicio (Choreographer, Director, Dancer) is one of the most sought-after flamenco performers, instructors and choreographers in the United States and Latin America. Described by critics as “the most amazing dancer seen in years,” having “hellfire footwork” and choreographies with “beautiful, evocative imagery”, he trained with world renowned flamenco artists Tomás de Madrid and La Tati and debuted at the legendary Casa Patas in Madrid in 2001. He also performed with The Washington National Opera at the Kennedy Center in El gato montés (1997) and in Don Giovanni (2003) under the direction of Plácido Domingo, and in Carmen (2015); and performed with the Washington Ballet in Hemmingway’s The Sun Also Rises (2013). He has appeared as a soloist throughout the United States with ensembles such as the José Greco Spanish Dance Company; and shared the stage with such internationally celebrated artists as Elena Andújar, Carmela Greco, Pastora Galván, La Tati, Ana Martinez, and José Luis Rodríguez.

Mr. Aparicio is the founder of Flamenco Aparicio Dance Company. His credits as artistic director and choreographer include such acclaimed productions as Íntimo with Carmela Greco, which was presented in Washington, DC, Philadelphia, Chicago, Pittsburgh, and Portland, OR; Entresueño, which marked his New York City debut as a company director; and Flamenco Flamenca, which was also presented at the Instituto Cervantes in Chicago. He is a co-founder of GALA’s annual Fuego Flamenco Festival and is on the faculty of the Washington School of Ballet. Mr. Aparicio was named one of “25 Dancers to Watch” by Dance Magazine in 2009; received a 2012 Protagonista Award from GALA for his artistic achievements and contributions to the Latino community; and the Cross of the Order of Civil Merit, bestowed by the King Felipe VI of Spain in 2015.

Sara Jiménez (Co-choreographer) is a Flamenco artist from Granada, Spain, who is co-choreographing Flamenco Men following her 2020 GALA Fuego Flamenco Award as part of the prestigious Competition of Flamenco and Spanish Dance in Madrid, Spain. She started dancing at age five and began Flamenco studies at age 10 in Seville. At the end of her formative years, she moved to Madrid and joined the company Estévez & Paños as a soloist dancer in the shows La Consagración, Bailables, El sombrero, and Flamenco hoy. She won the First Prize for Best Choreography with Macarena López in the Choreographic Contest Distrito de Tetuán and was nominated for Best Female Dance Performer at the 2018 Max Awards for the show Aquel Silverio. Her newest work, Variación atempo, is a duet with guitarist Pablo Giménez that has been presented in Seville, Valladolid, New York, and Germany, and it’s the piece that awarded her the GALA Fuego Flamenco Award.

Gabriel Matías (Co-choreographer, Dancer – TBC) is a Brazilian artist who won the 2021 GALA Fuego Flamenco Award as part of the prestigious Competition of Flamenco and Spanish Dance in Madrid, Spain.

He began his dance career at age 11 in Porto Alegre, Brazil. He was part of Flamenco del Puerto Company, performing in Las cuatro esquinas (2012) y Consonantes (2014), for which he won twice the Açorianos de Dança Award for Best Dancer. In 2015, Mr. Matías moved to Madrid, Spain, where he continued his Flamenco studies at the María del Ávila Superior Conservatory of Dance. He has performed at renowned Madrid tablaos such as Café de Chinitas, Las Tablas, Corral de la Pacheca, Torres Bermejas, and Café Ziryab, among others. He has also won the Flamenco Madrid Talent Award and the Extraordinary Prize at the Jerez Festival for Best Male Soloist. Mr. Matías is also a Flamenco teacher and premiered his show Ellos at the Flamenco de Jerez Festival in 2020.

FLAMENCO SPAIN ARTS AND CULTURE + FEDERACIÓN DE COMUNIDADES ANDALUZAS CENTRO ESPAÑA (FECACE)
The final week of Fuego Flamenco XVIII opens Thursday, November 10 at 8 pm with Alejandra, a moving piece in which José Almarcha’s masterful and intimate composition pays tribute to his late mother. A “great and lucid composer” (El País), memories reverberate within each note and theme that he develops, providing glimpses into his personal history, his roots, and his identity. Accompanied by the powerful choreography and dance by Lucía Ruibal, singer Fabiola Santiago Castillo, percussionist Jonatan Pacheco López, and violinist Fernando Clemente López, this show brings new depth to this genre. Performances continue Friday, November 11 at 8 pm; Saturday, November 12 at 2 pm and 8 pm; and Sunday, November 13 at 2 pm.

José Almarcha (Composer, Guitarist) is a Spanish artist from Tomelloso (Ciudad Real) whose comprehensive training, extensive artistic journey, and tireless artistic search have led him to develop a unique and impeccable technique when playing classic and Flamenco guitar. At GALA, Mr. Almarcha contributed to the music composition and performed in Flamenco Casa Patas’ Los silencios del baile (2016) and Binomio (2017). He was also the guitarist in Raiz de 4 at GALA (2019). A relentless composer and interpreter, he has also performed with prestigious dance companies including those of Olga Pericet, Marco Flores, and with soloists such as Antonio Canales, Sara Castro, Sara Calero, Rafael Amargo, and José Manuel Álvarez. Mr. Almarcha has been recognized at the International Competition in Jérez (2004), the XLVII International Guitar Competition del Cante de las Minas (2007 and 2010), the International Flamenco Guitar Competition “Niño Ricardo” (2007), among others. In 2015, he released his first solo recording, Vejézate, and Alejandra is his second solo work.

Lucía Ruibal (Choreographer, Dancer) was born in Cádiz, Spain, where she studied classical ballet for 14 years as well as Flamenco with master teachers Natalia Acosta, La Lupi, and Mercedes Ruiz. She has choreographed and performed as a soloist in several pieces, including Maramente (her first company presentation), Flamenco de hoy with Carlos Saura, Dionisio, la vida de las mil y una noches with Rafael Amargo, Clitemnestra with Producciones Equivocadas Company, Al son de ida y vuelta with David Nieto’s Company, and Caminos de España with Spanish Brass. She has participated in several festivals such as the FIA Festival in San José, Costa Rica, and the Circo Price in Madrid. She began touring with the former Flamenco Casa Patas in 2017 and recently starred in the video “Soledad” by Spanish pop music group Amaral.

TICKET & GENERAL INFORMATION
Single tickets for Fuego Flamenco XVIII are $48 Thursday through Sunday; Senior Citizen (65+), Student, and Military tickets are $35; Artist Reception tickets are $55 per person and Group (10+) are $35.

A Discount Festival Pass is $114, which includes a ticket for one performance of each of the three companies. In celebration of Hispanic Heritage Month, all tickets for the performances of Flamenco Men on November 5 and November 6 have a 15% discount with code HHM online. For more information and to purchase tickets, call 202-234-7174 or visit here.

GALA has 4 wheelchair accessible spaces and an elevator to transport people from the entrance to the lobby, and to the house. Parking is available at a discounted rate in the Giant garage on Park Road, NW (must validate parking ticket at theatre lobby for discount). Additional parking is available at the Target garage also on Park Road NW, between 14th and 16th Street NW. GALA is located one block north from the Columbia Heights Metro station (Green/Yellow lines).

COVID-19 SAFETY PROCEDURES
Masks are mandatory. Proof of vaccination or recent negative COVID-19 test (taken within 72 hours prior to show time) required for all patrons ages 5+.