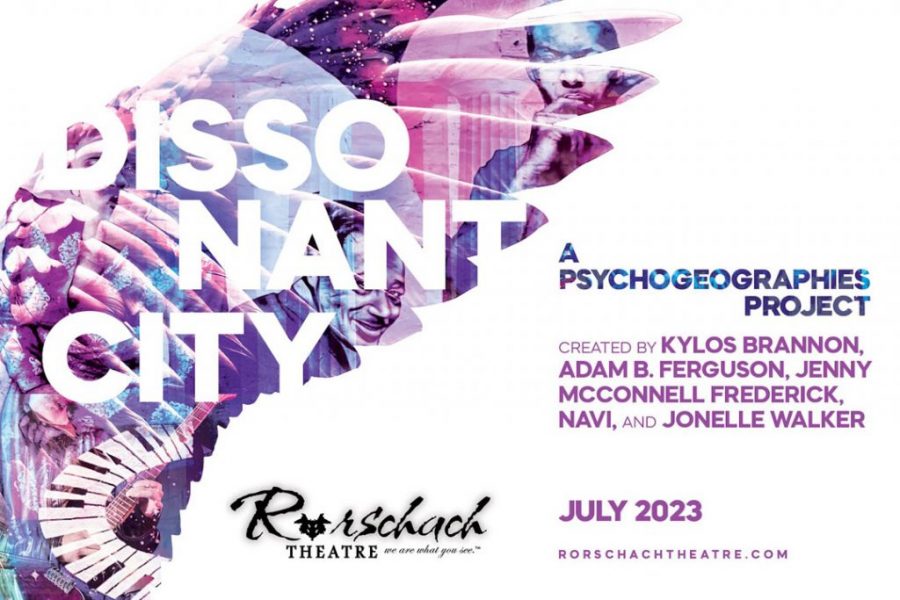 Beyond the bureaucracy and marble columns, there’s a steady beat that drives the Nation’s Capital. Dive into more than a century of DC music and find out just what it means to be immortal in Rorschach’s latest groundbreaking event.

Like the previous two Psychogeographies projects, DISSONANT CITY harnesses the power of the built and the natural world to create a visceral piece of immersive storytelling. Each month participants will receive a map and instructions to travel to a new curated location in the DC area. Along with the map, they’ll receive a box of artifacts to explore at each site with story elements such as letters, music, souvenirs, or photos.

From October through May, each box reveals a new location and a new chapter in the ongoing story. The first chapter of DISSONANT CITY: A Psychogeographies Project releases October 30, 2022, but participants can join at any time and will be sent the chapters they missed.

Rorschach will also host monthly online salons for DISSONANT CITY so audiences can discuss their experiences. This casual conversation will be moderated by Artistic Directors Jenny McConnell Frederick and Randy Baker with special guests each month to enrich the experience.

This psychogeographic adventure culminates with ANGEL NUMBER NINE in the summer of 2023. When Angel meets Cupid in a bar and her band gets an opening slot on a tour, life takes some unexpected turns into a past she tried to leave behind. Part rock show, part booze-soaked road trip through the dive bars and dark clubs of the late 1990s east coast music scene, ANGEL NUMBER NINE shows us that the things we need are sometimes found on the roads we tried to avoid.

THE CREATIVE TEAM
Adam B. Ferguson is an acclaimed director, arts administrator, creator, and advocate. Originally from Virginia, Adam’s adventures have taken him from South Africa to New York City to Bahrain, and many places in between. He holds a Bachelor of Arts in Theatre Arts and Rhetoric and Communication Studies from the University of Richmond, as well as a Master of Public Administration and Certificate in Nonprofit Management from Virginia Commonwealth University. Adam is the Production Manager for Rorschach Theatre, as well as the Program Manager for the American High School Theatre Festival and the International Collegiate Theatre Festival hosted annually as part of the Edinburgh Fringe Festival in Scotland, as well as the National Performing Arts Festival by WorldStrides. Other past work experiences include: Artistic Associate at Andy’s Summer Playhouse alongside Jared Mezzocchi. Associate Producer at Firehouse Theatre, Tour Associate at MCT, Inc. in the International Tour Office, Assistant to the Producer of the Met Live in HD at the Metropolitan Opera, Assistant to the Managing Director at Virginia Repertory Theatre, and inaugural Arts Editor of Beyond the Arts, powered by theTUNDRA. For full bio and professional directing credits visit here.

Jenny McConnell Frederick is a Director, Producer, and maker of impossible theatre. She’s the co-Artistic Director of Rorschach Theatre which she founded in the summer of 1999 with Randy Baker. For Rorschach, she has directed more than a dozen shows including the Helen Hayes Nominated Voices Underwater and God of Vengeance as well as both of the sold-out runs of Neil Gaiman’s Neverwhere. In 2020 she co-conceived the Psychogeographies concept for Rorschach.  In 2015, she conceived and directed Truth & Beauty Bombs, an original work based on the Canadian webcomic, “A Softer World.” She co-created Chambers of the Heart and MOVE!, two immersive dance/theatre projects at Word Dance Theatre. She served as Artistic Director of CulturalDC’s Source Festival and Mead Theatre Lab Program. In that capacity she oversaw the selection, development and production of more than 200 works for the stage over nearly a decade. Work developed and produced by Jenny at the Source Festival boasts multiple National New Play Network Rolling World Premieres, several American Theatre Critics Association Steinberg Award Nominations, and an Osborn Award Winner.  Jenny has directed for Theater J, Adventure Theatre, Capital Fringe Festival, Catholic University and University of Maryland.  She has served as a member of Theatre Washington Advisory Board, a mentor director for the Theatre Lab’s Honors Acting Conservatory and Kennedy Center’s American College Theatre Festival and was a featured speaker at the CityWrights Conference in Miami. She graduated cum laude from Virginia Commonwealth University with a BFA in Theatre and briefly joined Mensa for the free pencils. She lives in Takoma, DC with her husband and their long-term collaboration, a son named Thane.

Jonelle Walker is a Helen Hayes Award-nominated playwright, theatre-maker, and academic based in Houston, Texas. Her previous work as a playwright includes .DOCS (2022), Chemical Exile/CE:Synthesis (2021), Distance Frequencies/DF: Transmission (2020), TAME. (2016), Illyria, or What You Will (2018), The Theatre of Self-Loathing Presents … (2015), and a variety of short play projects. She is an Associate Producer and Company Member with Rorschach, and was a co-founder of Blind Pug Arts Collective. Jonelle received a PhD from the University of Maryland in Theatre and Performance Studies and co-founded the pop culture podcast RomCom Killjoys.

Kyle “Kylos” Brannon has performed as a VJ, or live video artist, at clubs, crafting live video mash ups for DJs including Moby, MSTRKRFT, Nadastrom, Jesse Tittsworth and Will Eastman. He’s performed at 930 Club, U Street Music Hall, Ram’s Head Live, The Black Cat, Jefferson Theater, The Saturn Birmingham, Brooklyn Bowl, and others. Throughout 2020/21 Kylos worked as lead designer for the Center for Environmental Filmmaking’s Media Report, doing both the print layout and the web & mobile site. He is a company member with Rorschach Theatre and designs video projections for plays, including, 410[gone] , Reykjavik, Annie Jump and the Library of Heaven, She Kills Monsters, and The Toxic Avenger Musical. He has created installations and live video performances, including immersive experiences for Little Salon DC, a solo exhibit titled Forgetting is Normal with the Anacostia Arts Center, and an original theatrical performance piece with Cultural DC’s Source Festival, titled Exquisite Depths. Kylos is a Professor in the School of Communication at American University and serves as the Associate Division Director for Film & Media Arts. Every Spring, Brannon produces, directs, and hosts the American Visions Awards, the School of Communication’s film awards ceremony.

navi (he/they) is a non-binary Sri Lankan manymedia artist. A self taught creator, they’ve released five albums, and performed & toured as the lead vocalist for multiple bands. As a theater artist, they starred in & wrote the music for Pointless Theatre’s d0t:, and have devised on stage with The Arcanists (The Tarot Reading), We Happy Few (Frankenstein), Dog and Pony (Romeo and Juliet for the deafblind), and more! They’re an alumni company member with Pointless Theatre, where – in addition to Art Making™ as a lighting designer, composer, sound engineer, performer, puppeteer, production manager, graphic designer & marketing content creator, they wrote Forest Tréas – an absurdist reflection on the 2002 DC Sniper crisis. Currently, they’re running the R&D wing of Flying V as an Artistic Lead, exploring the vast reaches of performance, technology, and nerd culture! @/$yourlocalnavi

“Rorschach Theatre has hit the jackpot with this innovative form of art, incorporating literature, music, mystery, romance, and DC’s highlights and history, all steeped in a hope for a better world.” -DC Theatre Arts

PSYCHOGEOGRAPHIES is Rorschach Theatre’s visionary experience that takes participants to unexpected locations around their city while a season-long fictional narrative plays out over layers of history and magic realism. Guests receive a box in the mail monthly that includes a new Chapter in the story, each box containing hand-crafted objects – letters, drawings, souvenirs, photos, or even snacks – and a map to a location in their city. The season ends with a live in-person event that culminates the story.

Hundreds of DC-Area audiences joined us for Rorschach’s first Psychogeographies project: DISTANCE FREQUENCIES. Described in The Washington Post, “[a] season-long immersive experience, DISTANCE FREQUENCIES sends audiences on monthly excursions to lesser-traveled Washington-area sites, where landscapes — together with the contents of curated mailed packages — help conjure a mysterious overarching story that is partly set in those locations.”

“Psychogeography” is a term coined by philosopher Guy Debord in the 1950s and refers to the intersection of psychology and geography. Our own psychological experiences of a city reveal hidden places – forgotten, discarded, or marginalized aspects of an urban environment. Locations have a history, a soul, a meaning beyond the dirt and bricks that surround it. These meanings range from the historical to the aesthetic to the personal, but all of these things give the space its resonance.

Since the PSYCHOGEOGRAPHIES project launched in 2020, the subsequent season – CHEMICAL EXILE – and live shows – DISTANCE FREQUENCIES: TRANSMISSION and CHEMICAL EXILE: SYNTHESIS – have brought well over 1,000 participants to 15 unique locations in the National Capitol Region.

ABOUT RORSCHACH THEATRE
Through uncommon uses of environment and intimate passionate performances, Rorschach Theatre seeks to lure its audiences beyond the limits of ordinary theatrical experience so that they may discover new elements of their own humanity.

Rorschach Theatre tells stories that allow for innovative design and visceral performances. The company treats productions as “installations” that surround the audience with the world of a play. Our work centers on the intersection of magic or impossible moments and every day human experiences. Without proselytizing, it provides a complex, intellectual catalyst for self-exploration of challenging subjects. Catalyzed by the circumstances of 2020, the company leveraged our unique strengths to create Psychogeographies, a groundbreaking project that combines history, fiction, magic realism and real world excursions in a new kind of theatrical experience.  This season-long immersive narrative takes participants to lesser-known spots around their city as a story unfolds through letters, artifacts, and objects mailed in monthly chapters.

Beginning during the Covid-19 pandemic, Rorschach began producing “Psychogeographies” – season-long immersive narratives that take participants to lesser-known spots around their city as a story unfolds through letters, artifacts, and objects mailed in monthly chapters.

Rorschach is also a vital launching pad for emerging artists. By trusting early-career actors, directors, playwrights and designers with substantive artistic responsibilities, and surrounding them with established professionals and ample resources, the company has become an essential showcase for new talent. In addition to its regular season, Rorschach produces “Magic in Rough Spaces,” an annual new play development series; “Klecksography,” an annual new artist development event (for actors, local playwrights, and directors); and “Fight Camp,” a stage combat training program held every summer.

Blurb: Beyond the bureaucracy and marble columns, there’s a steady beat that drives the Nation’s Capital. Dive into more than a century of DC music and find out just what it means to be immortal in Rorschach’s latest groundbreaking event

Like our previous two Psychogeographies projects, DISSONANT CITY harnesses the power of both the built and natural world to create a visceral piece of immersive storytelling. Each month participants will receive a map and instructions to travel to a new curated location in the DC area. Along with the map, they’ll receive a box of artifacts to engage all five senses while exploring each site with story elements such as letters, music, souvenirs, or photos.

Performances: Chapters will be sent to audiences beginning October 30. Participants can join any time throughout the year and will be sent all previous chapters. The culminating live performance of ANGEL NUMBER NINE will take place in Summer 2023 with details to be announced.

Rorschach Theatre Mission Statement: Through uncommon uses of environment and intimate passionate performances, Rorschach Theatre seeks to lure its audiences beyond the limits of ordinary theatrical experience so that they may discover new elements of their own humanity.