Opera Review: ‘The Valkyrie’ by Virginia Opera at the Center for the Arts at George Mason University 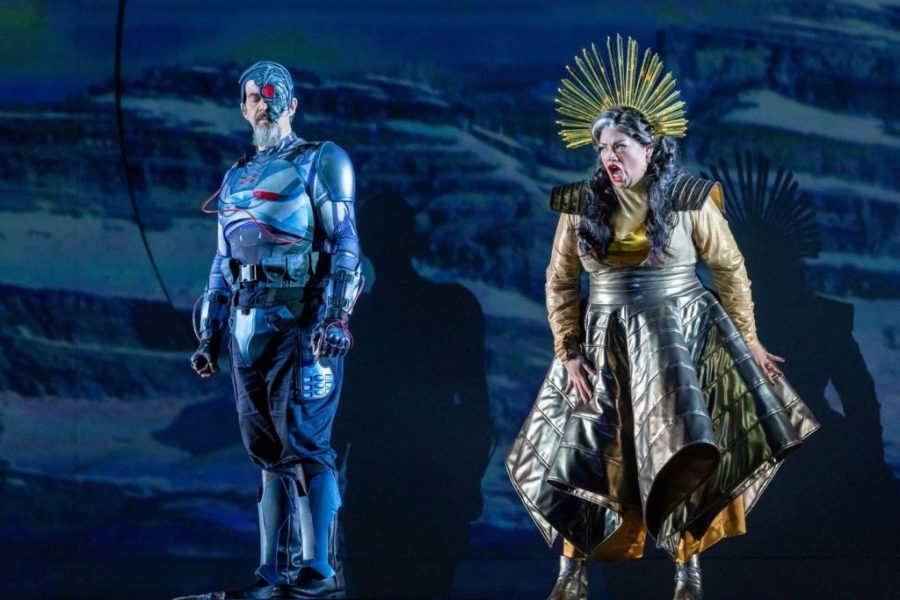 Kyle Albertson as Wotan and Claudia Chapa as Fricka in “The Valkyrie” (“Die Walküre”). Photo courtesy of the Virginia Opera.

Flamboyant, sci-fi style costumes help bring “The Valkyrie” (“Die Walküre”) to a new generation in the Virginia Opera production with Claudia Chapa as Fricka and Kyle Albertson as Wotan.

This second opera of Wagner’s “Der Ring des Nibelungen” (or the “Ring Cycle”) features a conflict between the mortal world represented by the human, Siegmund (played wonderfully by Tenor Richard Trey Smagur), and the immortal world commanded by Wotan (an imposing Bass-Baritone Kyle Abertson). The latter, though king of the gods, is unable to go against his self-made laws, leading to clash between the two worlds.

The Virginia Opera production presented the story and music beloved by opera buffs, including magnificent singing as well as the orchestral masterpieces “The Ride of the Valkyries” and the “Magic Fire Music,” conducted superbly by Adam Turner. In the nineteenth century, very realistic sets were used to evoke the Wagnerian mythological world. The Virginia Opera did so in a strikingly fresh way, perhaps with a view of making the opera more accessible to a younger audience today. Animated graphic sets, for instance, were efficacious, especially in scenes where the gods discussed the fate of Siegmund in the middle of icebergs as well as when the ring of fire was depicted with much motion. As the forest moved, characters appeared on the stage, which made this experience feel like watching a movie. Horse silhouettes in the background screen could be seen at several points of the production alluding to the horse scene. Then spartan stages with symbolic lighting were used. This new video approach speaks now to our generation.

There were also sets and costumes designed brilliantly by Court Watson with sci-fi influence. Speculative fiction imagery was projected on the back of the stage. The gods wore costumes that resembled non-specific superheroes that allowed young people to relate to those superheroes that would be familiar to them. They were neither Wagnerian takes on medievalism or modern science fiction, but instead, timeless fantasy, as when a flair of sunlike rays extend from the vibrantly colored headdress of Fricka, who was voiced magnificently by mezzo-soprano Claudia Chapa.

“Die Walküre” is not just about wonderful music and operatic spectacle but offers much for ethical consideration. In one instance, Brünnhilde (sung powerfully by soprano Alexandra Loutsion) is supposed to follow Wotan’s command, but she follows his will instead. Although personally he may be pleased with her action, he must contemplate punishing her because he is forced to obey his own laws. It is beautiful and dramatic and yet, a touching and close story, especially between Wotan and Brünnhilde who are father and daughter surrounded by family. These gods represent some of the same dynamics as mortal families. Incidentally, some of the libretto (the opera is performed in German with surtitles in English) recounts and prefigures some of the events in other Wagnerian “Ring” operas (the struggle over the special ring of magic powers, for example), and hopefully audience members will be able to travel to Valhalla again with the Virginia Opera should it perform other operas in the cycle of four.

Running time: Three hours and 15 minutes with one intermission.

“The Valkyrie” (“Die Walküre”) was performed on October 8-9, 2022 the Center for the Arts at George Mason University. (It also ran at the Harrison Opera House in Norfolk, September 30-October 2, 2022 and at the Dominion Energy Center Richmond, October 14 and 16.) For more information on upcoming events at the Center for the Arts and tickets, please click here. For more information on upcoming performances by the Virginia Opera, please click here.