Theater Review: ‘Matilda’ at the Children’s Theatre of Annapolis 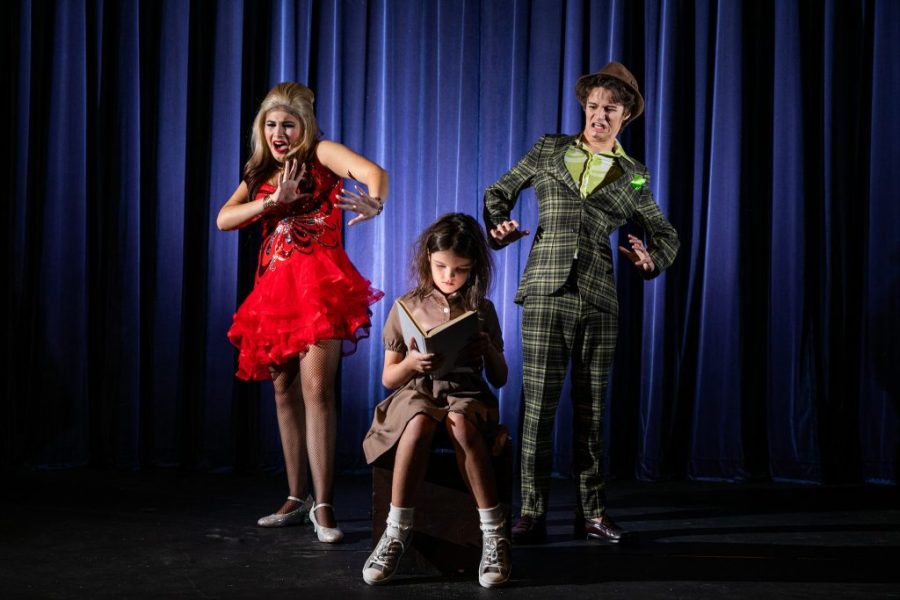 A small bundle of tremendous energy, with a strong will to right wrongs and find love, burst on the scene at the Children’s Theatre of Annapolis’ (CTA) current fall musical production of “Matilda,” based on the beloved children’s book by Ronald Dahl. In the title role, 10-year-old Harper Wright, was the free-spirited, bookish little girl, Matilda Wormwood, with a precocious attitude and exceptional talents. The show required lengthy dialogue and even more complex musical numbers. Harper, in almost every scene, beautifully served as the narrator of her story, born unwanted, raised without love, mocked, and punished for her superior intellect.

Director Atticus Cooper Boidy took a familiar but dark story and made it into a triumph for the young cast and their audiences.

The opening number “Miracle” was energetically led by Ryan McCandless, who played the doctor who delivered Matilda, trying to convince Mrs. Wormwood, (Matilda’s own mother played brilliantly by Mia Rinehart) that the unexpected pregnancy was a wonderful thing. Serving as Matilda’s stupid, money-hungry parents, Mia Rinehart’s and Finn Hintermeister’s masterful punch-line deliveries were only surpassed by their musical talents in their shining numbers “Loud” and “I’m So Clever.”

A standout was Amaya Shannon who played Matilda’s local librarian who recognized the child’s exceptional intellect and, more importantly, Matilda’s storytelling abilities. Shannon portrayed this character with humor and loads of energy, being the muse for the audience with a wish for Matilda to finish her elaborate tale.

Anna Porter as Matilda’s teacher, Miss Honey, recognizes Matilda’s talent and lack of parental love and care. In her musical number, “Pathetic,” Porter shines with a mature portrayal of a woman who views herself as too weak, too unworthy of being heard. Her vocals were skilled, and you honestly believed that this 16-year-old was experiencing the mature, intense feelings of longing and lack of self-worth. Porter’s vocals were so sophisticated that if you closed your eyes, you would think you were at the Broadway show.

Every show has its villain, and Matilda doesn’t disappoint, with the head schoolmistress, Mrs. Trunchbull (who views students as “maggots”). In this production, Matthew Earl masterfully portrays the larger-than-life character, but not in the traditional over-the-top, almost comical way. Instead, he is more subtle which results in a evil so powerful that, at times, it makes your skin crawl.

Other performers that must be noted include Justin Porath who performs multiple roles, including Matilda’s imaginary father, with a powerful performance of “My House” and a comedic take on the Russian mobster cheated by Mr. Wormwood; Caden Schnabel as the dumb, but talented Rudolpho, Mrs. Wormwood’s charismatic dance partner; and Mac Brabazon as Bruce, the leader of the “Revolting Children.”

The show’s choreography, led by Brandon Glass, shined in one busy number after another, allowing the cast to keep the energy going throughout the show. The music and its quick lyrical wordplay made this one of the hardest offered at CTA, but Music Director, Emily Sergo, working with a cast of all ages, delivered. Director Atticus Cooper Boidy took a familiar but dark story and made it into a triumph for the young cast and their audiences.

The sets were minimal but effective, especially the set of classroom desks and chairs and the lowering of a massive blackboard. Kudos to the costume team who found just the right look of each character— from the flashy red outfits for Mrs. Wormword and Rudolfo, to the cheesy suit for the shyster Mr. Wormwood, and the bomb jacket wardrobe of Mrs. Trunchbull.

Due to the rapid pace of the show’s music and the dialogue being done with all British accents, it was sometimes hard to process exactly what is happening. Familiarize yourself (and your child) with the story before coming to the show.