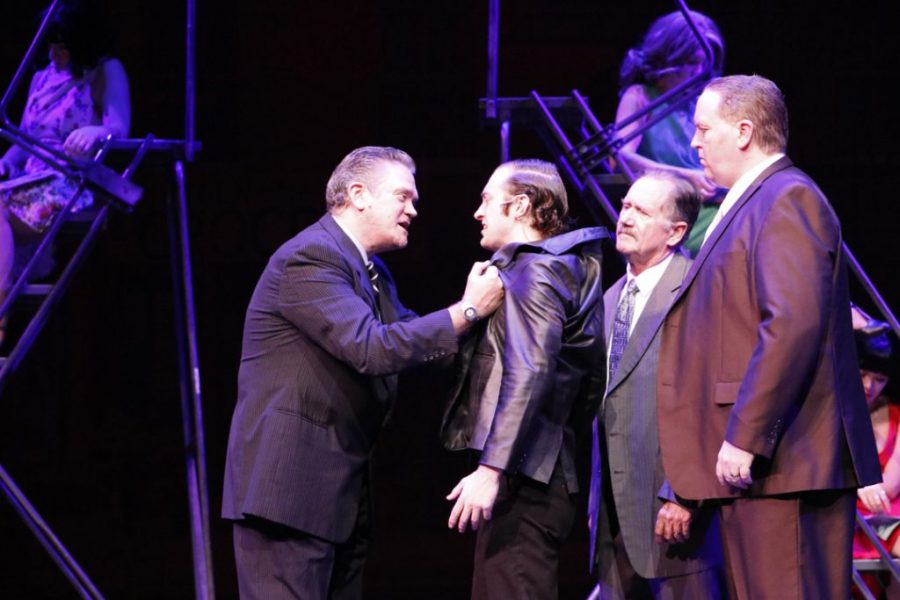 Love or fear. Old Nicky Machiavelli said there are only two choices. In “A Bronx Tale, the Musical,” presented by Dundalk Community Theatre, Calogero has to make a choice between the love and hard work of his father and the fear inspired by a Mafia boss named Sonny. This coming-of-age story set in the Bronx has a big heart and a lot of harmony. The show is based on Academy Award-nominee Chazz Palminteri’s autobiographic one-man show which premiered in 1989. It was made into a film in 1993 starring Palminteri and Robert DeNiro who also directed. The musical version premiered on Broadway in 2016 featuring a book by Palminteri, with music by Oscar, Grammy, and Tony Award-winner Alan Menken, and lyrics by Grammy Award-winner and Oscar and Tony Award-nominee Glenn Slater,

…a big heart and a lot of harmony.

The show starts with the Doo-Wop Guys singing in perfect harmony. In the Bronx, there definitely isn’t harmony as a man is shot over a parking space. Young Calogero (Noah Anderson) sees the whole thing from his stoop but knows that the lowest you can go is to be a rat. So he decides not to rat out Mafia boss, Sonny (Peter N. Crews). Sonny takes a liking to Calogero (who he calls C) because of his silence.

Calogero’s dad, Lorenzo (Brandon Nicholas Pfeltz), sits Calogero down and tells him that the saddest thing is wasted talent and that he should always look to his heart (just like Mickey Mantle and Joe DiMaggio). When Calogero earns money at the bar with Sonny and his men, his dad is not happy. But who can blame C? He likes all the special attention he gets by being ‘protected’ by Sonny—even as his dad points out that people don’t love Sonny, they fear him.

Eight years later, C (Al Tony Conte) is hanging with his crew—Sally Slick (Quentin Patrick), Handsome Nick (Ethan Kehring), and Crazy Mario (Christopher Fessler)—when some African-American guys walk by. The crew gets in their face and shouts racial slurs to make sure they don’t feel welcome in the neighborhood. But what happens when C has a crush on an African-American girl named Jane?

Anderson as Young C steals the show. He’s cute as a button, has fantastic stage presence, and exudes plenty of personality. Who can blame Sonny for taking Young C under his wing? Crews as Sonny is not the usual Mafia boss since he’s kind of likable. We see his softer side when he sings “One of the Great Ones” and urges C to take a chance on Jane despite the obstacles. Sure, he preaches that kindness is like weakness, but we do see a kind side of him underneath the tough exterior.

In “A Bronx Tale,” there’s a song for every scenario, including songs just for the places the Italians and African-Americans live—Belmont Avenue and Webster Avenue. This is a cast with strong voices so it works that there is more music than dialogue.

Costume Designer Eva Grove takes us back to the ’60s with Young C’s baseball jacket, Lorenzo’s bus uniform (which includes a shirt and tie), and the ensemble’s cigarette pants. Choreographer Rachel Lynnae Byers shows the difference in the dancing styles between Belmont and Webster Avenue. Fight choreographer Robert W. Oppel makes us believe that Sonny and his guys are really fighting that motorcycle gang who dares to go into their bar.

Lorenzo lets C know that all the choices we make will shape our lives forever, and that the saddest thing is a wasted life. Here’s hoping that C makes the most of his life. When the show ends as it starts—with Doo-Wop Guys singing—we have to believe there is harmony.

Running time: Two hours and 15 minutes long with one intermission.

Advisory: Note that due to the historical and autobiographical nature of this production, the show contains adult language, racial slurs, and scenes of simulated violence, including racially-motivated violence.