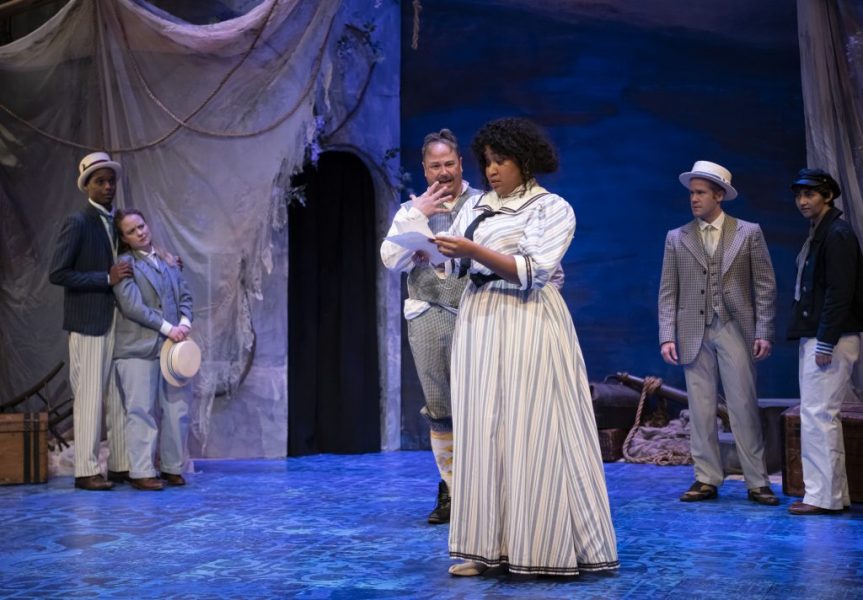 Chesapeake Shakespeare Company (CSC) kicks off its year-long celebration of their 20th anniversary with a re-staging of their very first production as a professional company—William Shakespeare’s “Twelfth Night.” Founding Artistic Director Ian Gallanar is at the helm as he was for the 2002 production. Gallanar chooses to strand the hapless survivors of the shipwreck that sets the play in motion in an Illyria re-conceived as a 1900s seaside resort.

…provides a delightful night out in Charm City.

Viola (CSC company member, Lizzie Albert) is separated from her twin brother. Sebastian (played on opening night by understudy William Kinna), during the shipwreck and both think the other dead. In the strange land of Illyria, she dons men’s clothing to protect herself, adopts the name Cesario, and gets work as a page to Duke Orsino. Orsino, rebuffed in love by the Countess Olivia (CSC company member Elana Michelle), sends Viola/Cesario to plead his cause to Olivia who instantly falls for the dapper Cesario. Olivia sends her pompous servant, Malvolio (CSC company member Ron Heneghan), to deliver a ring to Cesario. Meanwhile, Sebastian arrives in Illyria in the company of his friend, Antonio (Oz Heiligman). The twins are mistaken for one another leading to jealousy, brawls, tricks, and eventually a happy ending for everyone except Malvolio who is not only ostracized for his vain, controlling behavior but actually imprisoned—although, in the spirit of the play, he is released at the end.

Timothy Jones’ striking set is dominated by the angled mast of the wrecked ship and the stage is strewn with period luggage. A high tower, reminiscent of Rapunzel, provides a perfect place for Duke Orsino (CSC company member, Quincy Vicks) to moan about love while looking down on the comedic characters, Sir Toby Belch (CSC company member Gregory Burgess) and Maria (CSC company member Kathryne Daniels) who later use this same platform as a convenient hiding place. The stunning blue floor at once conjures the ocean and the mosaic-tiled floor of a seaside villa. Projected sheets of rain and wild waves, thanks to lighting designer, Jason Audem-Brinke, effectively introduce the conditions that launch the emotional love-storm carried out on land.

The early 1900s is effectively rendered by the set and Kristina Lambdin’s lovely costumes, both of which enhance the production. It is unclear why this particular time period was chosen for this production, but it does not detract from the story. However, the casual conversational style of the period may have influenced the rhythmic choices of the actors which worked against the poetry of Shakespeare’s language.

The audience is treated to a selection of lively pre-show music performed by members of the cast, including tunes originally composed by Dan O’Brien for the 2002 production of the play. A standout here is the lovely voice of actor/singer/songwriter Laura Malkus, who also plays Fabian. The music throughout the show is a highlight of the production.

Performance-wise, this production is light on the art of seduction and heavy on physical comedy. The play is problematic. All the principle characters are in love with an idea of love—albeit superficially. Why does Olivia fall in love with the boyish Cesario so quickly and why does Viola suddenly fall for Orsino? For the play to work, the actors must embrace the idea of love-at-first sight—that crazy, instantaneous passion that the characters must struggle to contain the moment after it flares up. This passion was missing from most of the otherwise enjoyable action. The cast is uniformly good, despite a certain amount of mugging and begging for laughs. Stand-outs are Ron Heneghan as Malvolio and George Michael Harris as Feste. Heneghan’s unwavering commitment to Malvolio’s vain, self-certainty allows the comedy to flow effortlessly out of the lines and situations. Harris has a facile command of the language and timing that makes the audience want to lean in to hear Feste’s shrewd takes on the action. This “Twelfth Night” provides a delightful night out in Charm City.

“Twelfth Night” by William Shakespeare runs through October 23, 2022 at Chesapeake Shakespeare Company, 7 South Calvert St., Baltimore, MD 21202, two blocks north of the Inner Harbor. Parking is available for the discounted rate of $5 at the Arrow Parking covered lot on 204 East Lombard Street. The theatre is also accessible using the FREE Charm City Circulator and is located on the Purple Route. For more information and to purchase tickets, call the box office at 410-244-8570 or email boxoffice@chesapeakeshakespeare.com. You can also go online. Based on current union rules, all patrons must be masked at all times while in the theatre, except while eating or drinking.