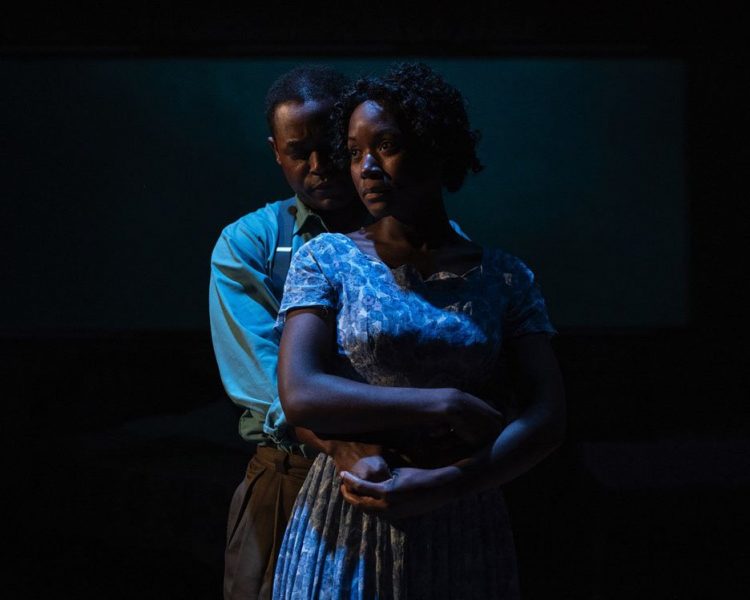 Vaughn Ryan Midder and Billie Krishawn in “Benevolence,” the third play of The Till Trilogy. Photo by Teresa Castracane.

The choices that people make today can impact the trajectory of an individual’s future for people that are known and unknown to them. The final play of The Till Trilogy at Mosaic Theater Company is “Benevolence,” written by Ifa Bayeza and directed by Talvin Wilks. “Benevolence” reflects on Caroline Bryant’s choices that led to Emmett Till’s death and how it impacted communities in the Mississippi Delta. Caroline Bryant fabricated accusations against Emmett Till which led to his murder by her husband and other men in 1955.

…a reminder that theater can be a political statement to initiate questions about the world around us.

The title “Benevolence” is suited for the play. The term benevolence refers to acts of kindness that a person has a choice to display towards other people. The play focuses on individuals having the choice to pursue these actions out of the goodness of their hearts. The first act depicts how and why Caroline Bryant (Anna DiGiovanni) made a choice to use Emmett Till as an example of racial hate instead of choosing benevolence.

The first act is from the perspective of Caroline Bryant (Anna DiGiovanni) while the second act is from the perspective of a Black resident named Beulah “Bea” Melton (Billie Krishawn). Both women lived separate lives across the railroad tracks, but they are forever changed by Emmett Till’s death. Anna DiGiovanni’s portrayal of Caroline Bryant is a realistic reflection of 1955. DiGiovanni accurately represents the mindset of White women at that time through her victimization as well as the use of language. DiGiovanni tackles this difficult character with brilliance by leaving no other interpretation for her character. Billie Krishawn has a powerful character that she handles with grace. Her character’s story is profound as she manages her family (Vaughn Ryan Midder) along with surviving in a segregated society. These characters do have their similarities reiterating the fact that they were people divided by race and choices.

The use of projections by Mona Kasra, lighting by Alberto Segarra, and music by Kwamina “Binnie” Biney are engaging factors for the performance. They create an environment that places the audience into the world of 1955. As an audience member, this permits the discovery of the Emmett Till story being an American story, regardless of race.

The play allows the audience to see how the murder and trial of Emmett Till became detrimental to the Mississippi Delta and the rest of America. “Benevolence” and the entire trilogy are a reminder that theater can be a political statement to initiate questions about the world around us. The audience can learn about America’s past mistakes to ensure a better future for the next generations.

Running Time: Two hours with and a 15-minute intermission.

“Benevolence” and the rest of The Till Trilogy will run through November 20, 2022 at Mosaic Theater Company at Atlas Performing Arts Center, 1333 H Street NE, Washington, DC 20002. For more information and purchase tickets, click here.  Masks are still required in performance spaces and theaters, but masking in public areas such as lobbies is optional.