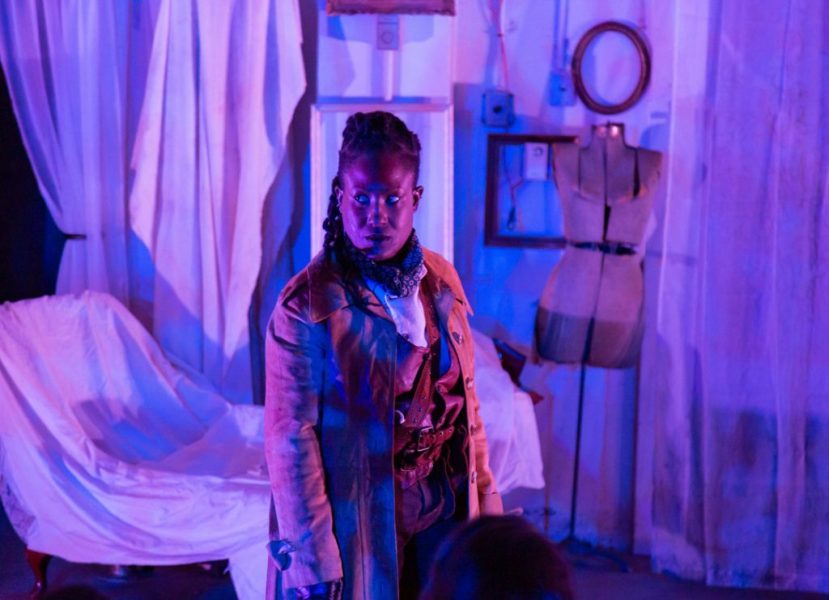 Rorschach’s “Dracula” delivers the feminist revenge fantasy it promises with a witty, relentless, and bloody satisfying attack on the patriarchy. Loosely based on Bram Stoker’s Dracula, playwright Kate Hamill turns the tables on the classic tale’s unquestioned male dominance and female victimhood with an uncompromising commitment to exposing the absurdity of gender stereotyping.

…some of the most imaginative and enlightening theatre around…Go see ‘Dracula’ before it vanishes into the night forever.

In Hamill’s “Dracula,” absolute authority no longer resides in men or a male God in heaven, making crucifixes, ecclesiastic paraphernalia, and the random garlic bulb powerless to scare off vampires.  Rather, salvation rests solely with those who can get the job done, which happen to be two women of color—Dr. Van Helsing (Phoenix Cross), a medical doctor dressed for a shoot-out at the O.K. Corral, and Mina Harker (Jessica Ludd), a pregnant woman with a rare gift for slaying the bloodthirsty parasites.

In their quest to rescue the world from Count Dracula, the women run up against the same tired obstacles. Dr. Seward (Erik Harrison) refuses to consider Dr. Helsing’s medical opinions, which ultimately leads to Lucy Westenra’s (Bri Houtman) tragic demise. Both Seward and Jonathan Harker (Conor Patrick Donahue) dismiss Mina, having concluded that her pregnancy renders her helpless.  However, Van Helsing meets the rampant devaluing of women with fierce resistance at every turn, all the while encouraging Mina to do the same, knowing full well that one woman, no matter how badass, cannot smash the patriarchy alone.

Director Rebecca Rovezzi has assembled a cast that includes some of Washington’s most gifted actors. Ben Topa plays an eloquent and sophisticated Dracula, in stark contrast to his wives, Jolene Mafnas and Marissa Liotta, who simply could not have been creepier in their roles as the bloodthirsty undead.  Donahue demonstrates that he is as adept at portraying a confident Jonathan Harker, Esquire, as he is the traumatized Harker who somehow manages to escape Dracula’s castle alive.

Renfield (Christina Day) plays a naïve woman who slavishly serves the patriarchy, only to realize the game was rigged against her all along. Houtman portrays Lucy Westenra as a thoughtful, complicated woman who, nevertheless, is on the verge of surrendering to convention. Mina Harker (Ludd) rises to the challenges before her but requires a heavy dose of prodding from Van Helsing to do so. Phoenix Cross plays a dazzling Van Helsing, with the perfect combination of grit, determination, and brilliant comic timing.

The venue is an abandoned fire station on the former Walter Reed medical campus that Set Designer Sarah Markley has transformed into yet another remarkable Rorschach theatrical installation. Graffiti greets the audience in the entranceway and spills into the theatre, enveloping the crowd in symbolism and adding to the already uncanny ambiance. The stage is filled with Victorian-era furnishings and ornate empty frames, and features three passageways that assist the actors to move the story along at a brisk pace.

For years, the Rorschach Theatre Company has been providing some of the most imaginative and enlightening theatre around, and this production is no exception. Go see “Dracula” before it vanishes into the night forever.

“Dracula, A Feminist Revenge Fantasy, Really” runs through November 6, 2022 at the Firehouse at the Parks at Walter Reed (located across from the Arts Park) at 6810 Cameron Drive, NW Washington, DC 20012. For more information and to purchase tickets, click here. COVID Safety: Masks are required.