Theatre Review: ‘Elegies: A Song Cycle’ at The Keegan Theatre 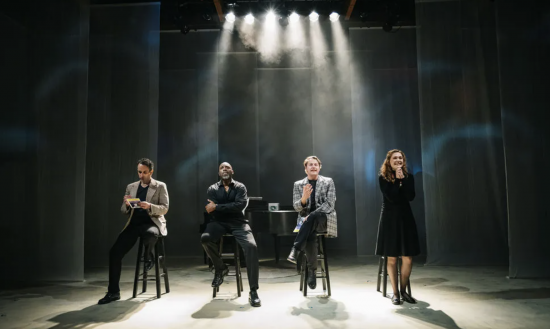 Life, loss, legacy. These are just three, short words, but they’re certainly not small in concept. How, then, could composer and lyricist William Finn—best known for “Falsettos” and “The 25th Annual Putnum County Spelling Bee”—encapsulate them into one 90-minute show? This is precisely what he did when writing the emotion-heavy, song cycle, “Elegies,” currently running at The Keegan Theatre.

…fast-paced…deals with haunting subject material, but it’s presented in a way that doesn’t make you lose hope.

For those unaware, a “song cycle” is a group of songs with an overarching theme that are meant to be performed in a sequence. In “Elegies,” that overarching theme is those three, aforementioned words: life, loss, legacy. Finn wrote the song cycle in response to the September 11, 2001, attacks, but it also touches on the lives of friends lost to AIDS and the death of his mother.

On paper, this sounds tragically sad (and, yes, you should bring a spare tissue). But there’s also joy and hope in the music, performed by the ensemble cast of Ben Clark, DeJeanette Horne, John Loughney, Katie McManus, Harrison Smith, and Brigid Wallace. Each performer brought a range of emotion (both joyful and sorrowful) to the various roles they played. Brigid Wallace’s rendition of “Anytime (I Am There),” which is one of the most underrated musical theatre numbers, was mesmerizing. I wish we would have seen more of Ben Clark, who appeared just at the beginning and end of the show, but whose talent shined.

Directed by Christina A. Cloakley, this production is fast-paced and clean. The minimalistic set, by Matthew J. Keenan, consists of a baby grand piano and a set of floor-to-ceiling sheer white curtains. It allowed the audience to be transported via projections inside apartments, to the park, and to New York City.

To be sure, “Elegies” deals with haunting subject material, but it’s presented in a way that doesn’t make you lose hope. As one of the final songs shares, “The ending’s not the story.”