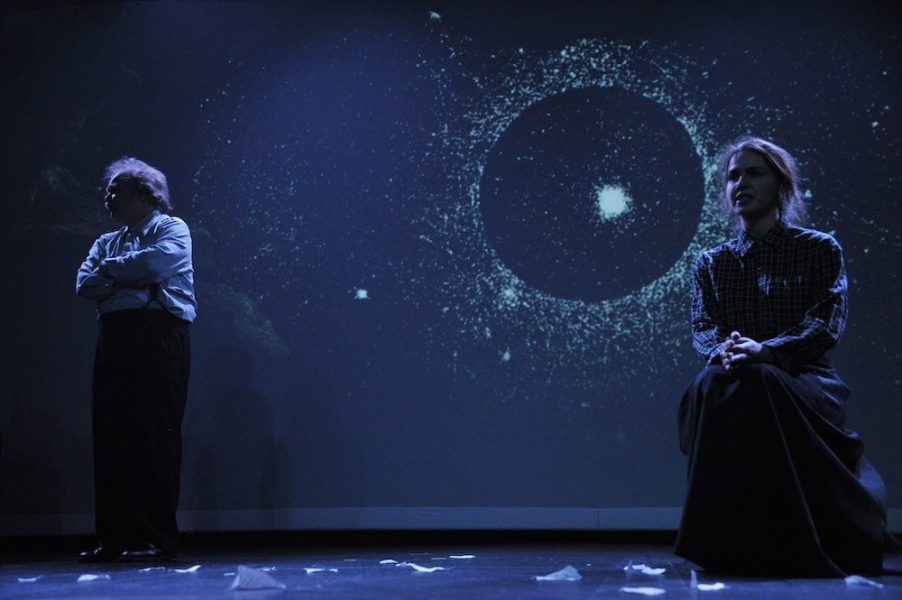 History is a funny thing. How willing are we to stop, reassess and recalibrate what we think of the past —our icons, our shining lights of greatness?

There has been a lot of icon-busting these days, as new information is brought up about public figures, as well as the lesser known exploits of women, as Liberty, Fraternity and Equality were slow to come to reality. One of these stories is the fascinating reimagining of Albert Einstein’s life with his first wife, Mileva Marić, in ExPats Theatre’s “Einstein’s Wife” by Serbian playwright Snezana Gnjidic. Performed at the Atlas Performing Arts Center, “Einstein’s Wife” is directed and nurtured into existence by Karin Rosnizeck and it is a riveting character study exploding walls and conventions.

…a riveting character study……almost ‘a don’t take your eyes off it’ experience.

Taken from recently discovered correspondence between Albert and Mileva from their first encounter, college and 16-year marriage, it breathes life into a known figure—the puckish, sometimes outrageous, and very quotable Einstein, the most famous scientific name of his era—and the heretofore unfamiliar first wife, a gifted physicist and mathematician who more than holds her own in a scientific tête-à-tête. Even in Albert’s own written words, she is a brilliant mind who helped him coalesce his theories that changed our view on the universe.

Based on letters from the past, there is no way to ascertain what really happened. But in the early years, Mileva was a tremendous support to Albert creatively and relationally. Alas, another story of the woman choosing duty over success, mainly because of overwhelming odds.

Sasha Olinick is Albert Einstein and Cecelia Auerswald plays Mileva Marić in this two-person drama. Olinick is a veteran character actor who does not necessarily resemble Einstein, but imbues him with the questioning nature and wonder—also bringing his faults to bear—with a little, classic Yiddish attitude. Auerswald gallantly plays a wife who will not crack under the pressure, even when finding herself in miserable situations. Her biting dialogue provides the spark for several memorable exchanges.

The underlying theme of the show is of a brilliant, floundering, absent-minded student-scientist who needs to rely on a studious, organized woman who can understand his theories and his failings. It does divert time, as in the playful first scene where Albert and Mileva are having an unusual look back conversation in a place that we assume is the afterlife. Einstein stated that he was an agnostic, once saying that “one life is enough for me.” This has a light “Waiting for Godot” feel as they gently parry and ask about a throwaway stone that was missing, that was misplaced, and that didn’t matter.

Other scenes uncover their early life as students at Zurich Polytechnic, and we can see their unusual chemistry. As Einstein struggles to explain theoretical concepts, he exclaims, “You always understood things better than I did!” Later, he intones “Without you I lack confidence. Without you I find no pleasure in work, or joy in life. Without you my life is not mine!”

Much of the action would be two dimensional without the ethereal video presentation on the full backdrop of complex matrices and images of timepieces, especially an eerie one with a clock face rotating and the second hand turning a bit faster—time within time. Kudos to Dylan Uremovich for lights and projection design and the starkly effective set design by David Higgins.

Karin Rosnizeck has directed an unusually constructed show that contains elements not normally taken up on stage (think “Proof” with less heady formulas). It turns out that it is eminently watchable, almost “a don’t take your eyes off it” experience.

An especially fascinating scene unfolds as they describe their thoughts of time and motion—the relativity theory—as if brought up for the first time by humans on earth. Milcva says “Yes, I mean the things we cannot see or touch. But they are still here, no matter whether we know them or not… If you see the universe in only three dimensions, then life is life and it finishes in death. But if we see it in four dimensions, then life is infinite…and there is no end.”

Mileva could have put up with almost everything—including not being recognized for her scientific theories—but not his rejection of their sick daughter, Lieserl.

There are many notable moments. In a chilling, later scene, Olinick is back in the afterlife, as Auerswald plays Lieserl, asking her father what happened to him, and about her abandonment. Spine-tingling stuff from both, especially when turning back to Mileva again, hashing out their differences through eternity. Her sharply incisive dialogue makes you feel for what could have been.

ExPat’s Theatre is a newcomer to the DC theatre scene that focuses on plays with global perspectives of historical events and the human condition across cultures.