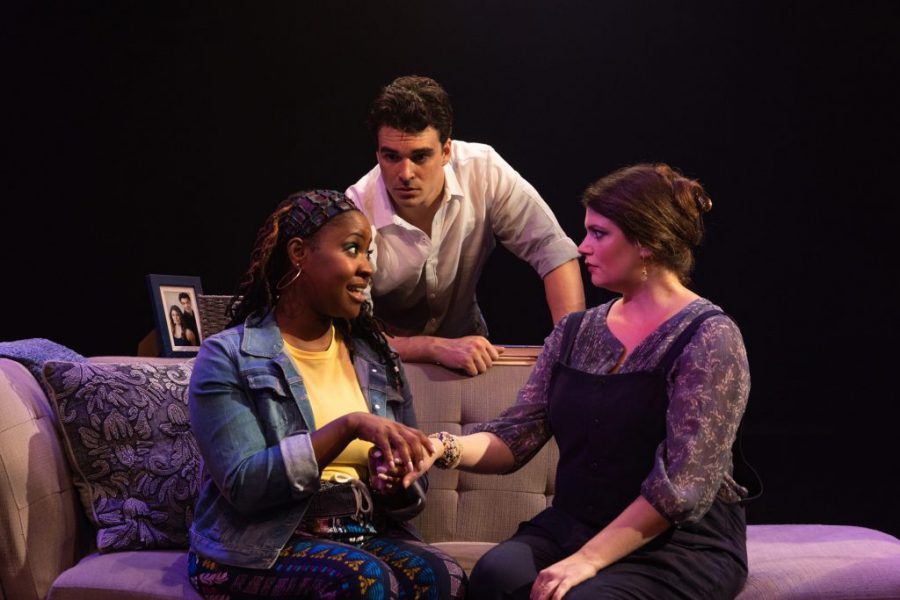 In 1990, “Ghost” premiered in movie theaters, starring Patrick Swayze, Demi Moore, and Whoopi Goldberg. Audiences and critics alike enjoyed the movie, which was nominated for five Academy Awards, winning two. “Ghost: The Musical,” now at Toby’s Dinner Theatre, not only recaptures the charm of the original, but may in fact improve upon it.

…highly recommended…the joyousness of the songs and comedy help us to experience the dramatic parts more fully.

The story revolves around Sam Wheat (played here by Patrick Gover) and Molly Jensen (MaryKate Brouillet), a young couple very much in love. Sam is tragically killed in a hold-up. Molly is, of course devastated, while Sam finds himself stuck as a wandering ghost who can see humans, but cannot interact with them…at least, until he encounters Oda Mae Brown (Ashley Johnson), a shady psychic advisor who can at least hear Sam when he speaks. Together, Sam and Oda Mae try to communicate with Molly and unravel the events of Sam’s death. The results are at times sad and, at other times, quite funny.

This is where Toby’s “Ghost” shines. The original movie was more of a bittersweet romance, with occasional humorous parts. Toby’s “Ghost: The Musical” acknowledges the drama, but relishes its comic aspects as well, in large part due to the talents of the cast. On the dramatic side, Sam is portrayed very well, both in character and song, by Patrick Gover. His Sam starts out as decent and sincere, but a bit conventional. He gradually rises to meet the outlandish, post-mortem world in which he finds himself. MaryKate Bruillet’s Molly complements Sam well. She has her own journey to follow, learning to see beyond cynicism and superficial appearances. Shane Lowry, playing Carl Brunner the night that this reviewer attended, is similarly excellent as a person whose sole guiding star is greed. All three are able to portray their situations and personalities in song, especially in the wonderfully titled “Life Turns on a Dime,” a show tune with rock elements.

On the comedic side, Ashley Johnson is stellar as Oda Mae Brown. She imbues her Oda Mae with a manic energy of a woman who has fully embraced her inner grifter, only to find that she has abilities— both psychic and moral—that she never before imagined. This energy is brilliantly displayed during her standout performance in her Gospel-influenced show tune, “Are You a Believer?”, as she cons the credulous Mrs. Santiago, the latter played by Santina Maiolatesi. Ms. Maiolatesi enhances this scene by demonstrating Oda Mae’s powers of persuasion as Mrs. Santiago is gradually drawn in by the psychic’s strong personality.

Also significant are two other ghosts—a friendly hospital spirit and an antisocial, subway ghost. The hospital ghost is wonderfully portrayed by Toby’s regular DeCarlo Raspberry. Mr. Raspberry leans into the conviviality of his ghost in his jazz-influenced song, “You Gotta Let Go Now,” showing us that for decent people, death is not something to be feared, but is instead a welcome transition to a better state. The subway ghost, for this particular performance portrayed by understudy Brian Dauglash, is much more ambiguous. While hostile, even tormented, he is later helpful to Sam. Mr. Dauglash manages to impart a fleeting, hip-hop jauntiness to the ghost’s one song, “Focus,” adding depth to the character.

As with many shows at Toby’s, the staging is sparse but effective. Costuming, designed by Janine Sunday, is realistic, while lighting, props, and sound effects (by David Hopkins, Shane Lowry, and others) are used to evoke a sense of place more than to convey strict realism. This works very well for the show. The same can be said for the special effects when supernatural events occur. The music is provided by a small, live orchestra directed by Ross Scott Rawlings. Visible to the audience, the presence of the musicians adds to the overall ambiance.

This production of “Ghost: The Musical” is highly recommended. It will please fans of the original movie but will also be enjoyed by those who have not seen the film. Indeed, this reviewer found the musical, directed by Mark Minnick, to be more emotionally resonant than the original film. The joyousness of the songs and the comedy help the audience experience the dramatic parts more fully. It also reminds us that, sometimes for the better and sometimes for worse, life can turn on a dime.