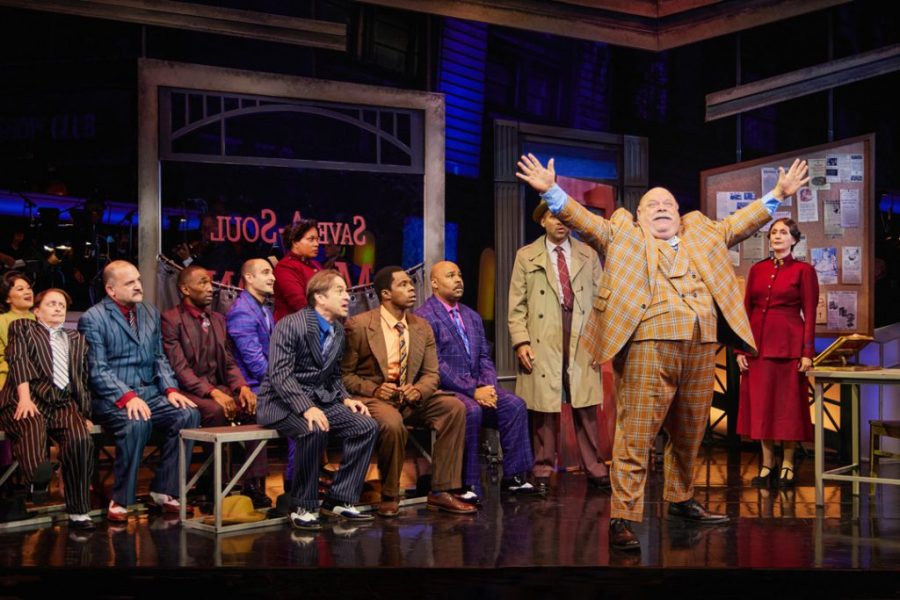 Kevin Chamberlin and the cast of “Guys and Dolls.” Photo by Jeremy Daniel.

Sadly for theater lovers, “Guys and Dolls,” one of the most iconic and “perfect” American musicals, is only at the Kennedy Center for a short run and is nearly sold out (see below). It’s no wonder. With a star-studded dream team of a cast, in one of the best Broadway musicals ever written, this production is pure magic. Based on the colorful characters of Damon Runyon, this was one of the musicals that made me fall in love with musicals. With music and lyrics by Frank Loesser and book by Jo Swerling and Abe Burrows, the show premiered on Broadway in 1950 and won five Tony Awards in 1951, including Best Musical. It has had countless revivals over the past 72 years, notably the 1992 production with Nathan Lane and Peter Gallagher which won numerous awards. It was made into a 1955 movie with some interesting casting choices that included Marlon Brando, Frank Sinatra, and the original Adelaide, Vivian Blaine.

The show is directed by Marc Bruni (“Beautiful: The Carole King Musical”) and packed with Tony winners/nominees and veteran Broadway actors, including James Monroe Iglehart (“Aladdin”) as Nathan Detroit; Jessie Mueller (“Beautiful: The Carole King Musical,” “Waitress”) as the star of the Hot Box, Miss Adelaide; and Steven Pasquale (“The Bridges of Madison County”) as Sky Masterson, the slick gambler who woos the straight-laced mission worker, Sarah Brown—played by his real-life wife, Phillipa Soo (“Hamilton”)—on a bet, and falls in love along the way. (It was interesting to note that the current tour of “Hamilton” was packing up to take the trip up the road for a Baltimore run).

Other notables are Kevin Chamberlin as Nicely-Nicely Johnson, Matthew Saldivar as Benny Southstreet, and a brilliant turn by the former Saturday Night Live cast member Rachel Dratch as the tiny, but feared, gangster, Big Jule. In a shrewd interpretation, this chameleon does not overplay the character and is a delight to watch—even when she doesn’t have a line.

Everyone in this cast is fabulous and the enthusiastic and boisterous audience was with them from the start. They applauded each entrance and gave well-deserved, mid-show standing ovations to the dancers in “The Crapshooters Dance” that preceded “Luck Be a Lady” and to the cast for “Sit Down, You’re Rocking the Boat.” There was a very funny, undetermined mishap when Mueller was delayed in making an entrance. Pros to the core, Pasquale and Chamberlain first improvised and then there was an announcement and they left the stage. Pasquale came out to make sure we were all still here, and, in moments, the show was reset. It felt strangely so right and intimate, like old friends getting together again after a long absence.

I first saw Jessie Mueller in her Broadway debut—“On A Clear Day” with Harry Connick, Jr. Although the show did not fare well, Mueller’s voice was so pure, it brought me to tears. As Adelaide, she also smartly does not go into caricature or imitation but, at times, reminds one of the great Judy Holliday—and it works. Her voice is still stunning. Pasquale and Soo clearly have chemistry from the start and work so beautifully together. James Monroe Iglehart is marvelous as the beleaguered Nathan Detroit. He is getting it from all sides—from Adelaide, his fiancé of 14 years, and from his fellow gangsters as he tries to find for a spot for his floating crap game—and you can’t help but fall in love with him.

The costumes by Mara Blumenfeld are lively and colorful, perfectly recreating that era. My only issue is that the stellar Kennedy Center Opera House Orchestra physically took up a good portion of the stage. They sit in two, angled and skewed “boxes” (they appear to be rooftops of high-rise buildings) on either side of the stage. Except for a path in between, all the action was pushed to the front of the stage. Also utilizing skewed perspectives, the gorgeous, animated projections by Paul Tate dePoo III (complemented by glorious lighting design by Cory Pattak) were shown behind the orchestra and it started to feel a little busy. The set pieces were minimal, coming from above or brought on by the ensemble. It would have been nice to give more breathing room to the dancers and the wonderful choreography by Denis Jones.

This show is a national treasure and this talented cast and creative team made “Guys and Dolls” shine as brightly as ever. (Also kudos to the ushers at the Kennedy Center for always being so incredible and helpful.)

Advisory: Recommended for age 9 and up.

“Guys and Dolls,” part of the Broadway Center Stage series, runs through October 16, 2022 at the John F. Kennedy Center for the Performing Arts, 2700 F St NW, Washington, DC 20566. For tickets and more information, click here. PLEASE NOTE: If a performance is sold out, check back or call the box office later. A limited number of seats could become available closer to performance time. Masks are required for all patrons inside all theaters during performances at the Kennedy Center unless actively eating or drinking.