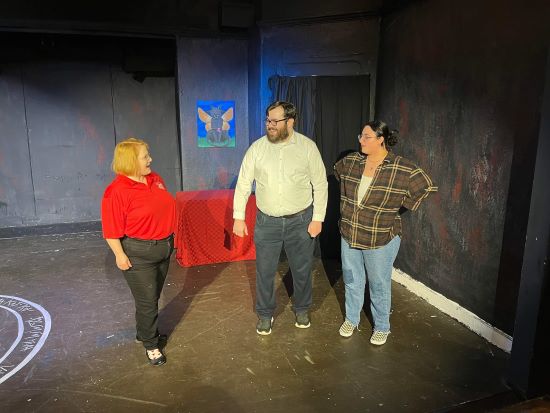 Laurel Mill Playhouse is currently presenting the world-premiere of “Hellbent” by Jeff Dunne who also directs. The play is a satire of Dunne’s vision of hell. Lacey (Victoria Sova) and Devlin (Robert Howard) are dating and Lena (Selena Renee Gill) is a longtime friend of Devlin and skeptical about his relationship to Lacey. They are inadvertently summoned to hell by three inept demons, Ophistopheles (Christopher Caruothers), Incubeth (Sam David), and Ahmenahmenon (Kevin Wilson). After the mortals arrive, they are joined by another possible demon, Fezdemona (Becca Korn), and a human wanting to be a demon, the inept Robert (Ed Schilter). Of course, there is an appearance by “Uncle Louie” or Lucifer (Bob Singer). Relationships form quickly between the demons and the humans which leads to mayhem and a possible crime. While all the performances are well done, Gill has a good portion of the dialogue which she handles adroitly.

…a fiery farce filled with funny lines and antics.

The plot moves rapidly so make sure you keep attention on the action. The play has some cute gags.  The demons all have jobs that earn them lucre. One, for instance, Ophistopheles, is the demon of offices who causes copiers to break and staplers to jam. Incubeth is the demon of ill-conceived dating decisions.

As the director, Dunne keeps the action moving and fast-paced, necessary in farces. There is really no set but a few interesting props that add to the story. Marge McGugan does a nice job with the costuming by keeping it simple. Only Lucifer has a real costume as the devil. Sound and lighting by Dunne and Dana Bonistalli complimented the actors and the theme of the play.

“Hellbent” is a fiery farce filled with funny lines and antics. It is great to have a theatre, like Laurel Mill Playhouse, that gives local, original plays a chance to be performed.

Running Time: One hour and 45 minutes.

Advisory: This play may not be suitable for very young children due to some language and subject matter.