Theatre Review: ‘Holiday’ at Arena Stage at the Mead Center for American Theater 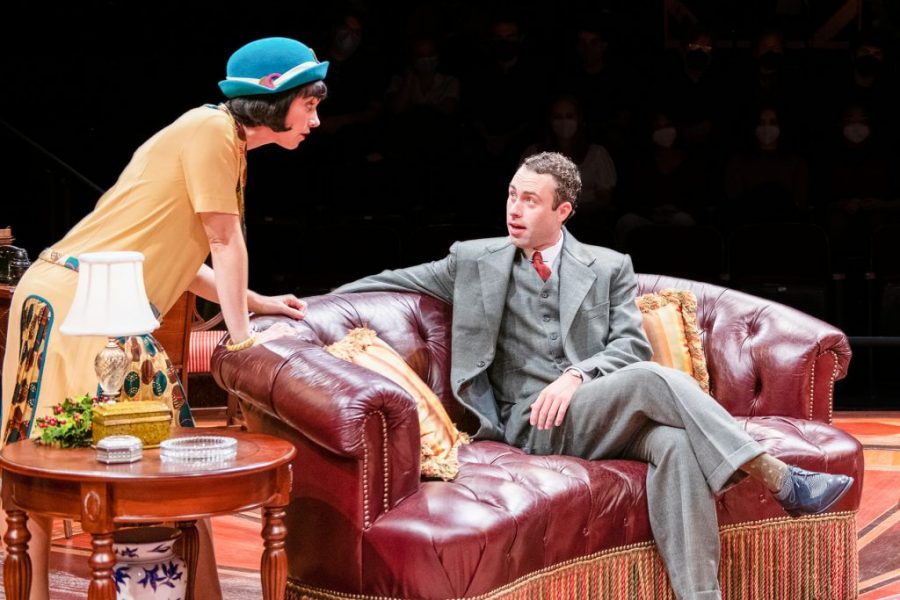 Arena Stage continues its 2022-23 season with the gentle, romantic comedy, “Holiday,” a very good-looking show underscored by a solid ensemble cast, directed by Anita Maynard- Losh. (Audiences may be familiar with the 1938 film starring Cary Grant and Katharine Hepburn). The play opens on Misha Kachman’s period-faithful set, richly furnished befitting the 1920s setting. Julia Seton joyfully greets her new fiancée of not many weeks, Johnny Case (Sean Wiberg), who has arrived to help announce their engagement to her father after the couple’s whirlwind romance. Presented on Arena’s Fichandler Stage in the round, the expansive space helps underscore the size of the mansion Johnny gawps at. “You must all be so rich!” he exclaims with good humor, to a slightly bemused Julia (Olivia Hebert), who is clearly not used to any talk about money.

Julia’s family soon arrives, including the sardonic brother, Ned (a wonderful John Austin), and delightful sister, Linda (Baize Buzan). This more forthright sister tends to say the quiet part loud, providing running commentary on what might be wrong with the Setons. “Money is our god here,” she wryly informs Johnny in their first meeting.

… a very good-looking show underscored by a solid ensemble cast…

Money, the making of it and the having of it, is a major theme of the story. Johnny, played with eager aplomb by Sean Wiberg, is a self-made counterpoint to the Seton’s established, respectable, wealth. A bootstrapper, his description of his working class beginnings makes Julia’s conservative, industry titan father (Peter Boyer) feel a bit faint.

It has the opposite effect on Linda, who finds Johnny to be a breath of fresh air, and maybe even more. Wiberg and Baize Buzan as Linda do a nice job developing the characters’ rapport as their similar rebellious streaks push them closer towards each other, aided by the charming banter of Philip Barry’s script. Pablo Santiago’s increasingly intimate lighting does the rest later in the show as things take a romantic detour.

Barry’s play views money as something nice to have, and the production’s stunning costumes by Ivania Stack, including a gilt party dress for Linda, are a visual celebration of what money can buy. But the script, through the character of Johnny, remains suspicious of amassing wealth. “I don’t want too much money,” Johnny declares at one point. The original production was set and produced right before the 1929 market crash and, in retrospect, creates a poignancy that only underscores the play’s best impulses and takes away nothing from its optimistic ending.

“Holiday” runs through November 6, 2022 at Arena Stage at the Mead Center for American Theater, 1101 Sixth Street SW, Washington, DC, 20024. For tickets and more information, click here. Safety protocols: It is required that patrons wear masks while attending performances in our theaters. It is recommended but not required that patrons wear facial masks in the public, non-theater spaces, such as the Lower Lobby, Grand Lobby, Molly Smith Study, and café area. For more information, click here.