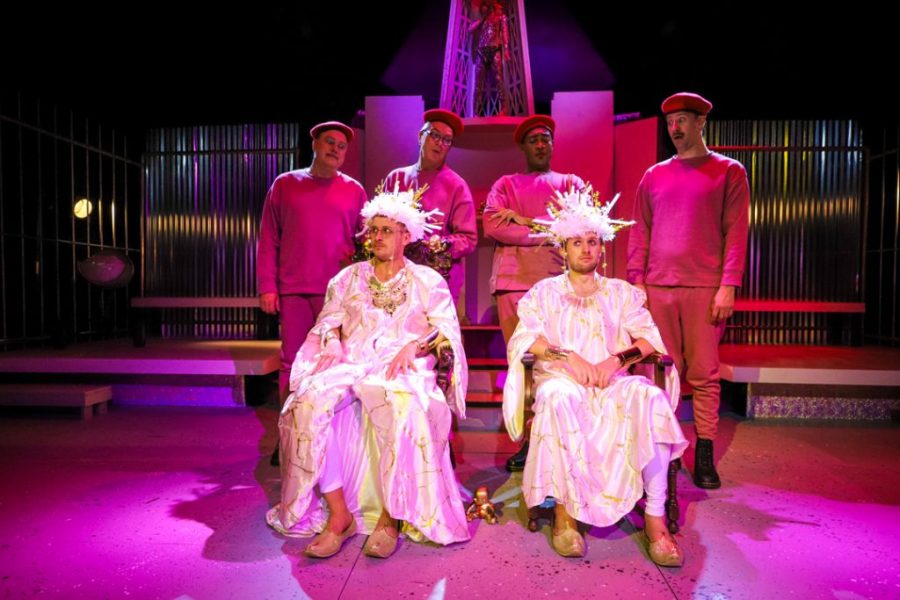 The cast of “Mankind.” Photo by Wilson Freeman.

Jason and Mark are just two bros in the distant future navigating an unplanned pregnancy in a world where men can get pregnant, abortion is illegal, and there are no women. That’s the premise behind  Robert O’ Hara’s “Mankind” presented by the Iron Crow Theatre and directed by Ann Turiano.

…a strong and exciting return for Iron Crow Theatre…

The two dudes are just keeping it casual so they decide to seek out an abortion. But they’re caught and imprisoned. Jason gives birth from jail only to have the first baby girl born in a century. This launches the couple into fame, events transpire, and soon Jason and Mark find themselves demi-gods in a new religion: Feminism.

It’s hilarious but unsettling. When Mark and Jason’s baby, Cry-Baby, dies, we laugh as they are trotted back off to jail. Yet how can I laugh when women are jailed all over the country for crimes against their children they did not commit? It’s too over-the-top you can’t help it.

Jake Stibbe (Jason) and Max Johnson (Mark) could easily be caricatures but they resist. We watch them, even from separate jail cells, learn to care for each other and their child. They make smart acting choices that guide us a little bit easier through the absurdity of their world. For instance, when they talk about their “fathers,” they stress the first syllable of “FA-ther” to indicate which father is the birthing father. When we eventually do learn about their backgrounds and families, we still get a sense of the individuals who make them.

Ultimately, it’s this sense of relationship building that makes this production work. While Iron Crow plays up nearly every line for the laugh, we still end with a profound sense of the injustice that has taken place against pregnant and parenting people. Of course, it goes without saying that everything lands harder now that we are closer to living in a post-Roe v. Wade world.

Iron Crow’s production comes close to smoothing a lot of flaws that the script has been criticized for since it premiered in 2018. It’s surreal and ridiculous from the beginning. We notice that the baby’s cradle is made from an empty beer keg. The younger audience members will recognize the opening music from a meme that went viral on TikTok earlier this fall. There are costumes made out of baby doll parts. The OB/GYN is overcome with hysteria when trying to deliver the baby. While O’Hara’s book has been criticized for not knowing what it is trying to satire exactly, this production puts the joke is squarely on men. History repeats itself here in laws and in religion, and men continue to make the same mistakes.

Did I mention there’s also audience participation? The ensemble of Nicholas Miles, Timoth David Copney, David Forrer, Doug Krehbel, and Lucius Robinson are fabulous as they take us through the court of law and court of public opinion. I even got some feminist propaganda to take home!

Iron Crow Theatre Company’s 2022/23 season runs out of the Baltimore Theatre Project. If you come to see “Mankind,” you can also take part in and experience “Airing out the ‘Dirty’ Laundry,” a collection of art installations hung on clothesline meant to provoke thought and dialogue about the fight for reproductive justice and autonomy. You can share stories and also handle clothing items with stories stitched or written into the fabric.

Advisory: Recommended 14 and up; strong language and references to sex.

“Mankind” runs through October 23, 2022 presented by Iron Crow Theatre at the Baltimore Theatre Project, 45 West Preston Street, Baltimore MD, 21210. For tickets and more information, click here. PLEASE NOTE: Masks are required for all patrons inside the theatre unless actively eating or drinking.