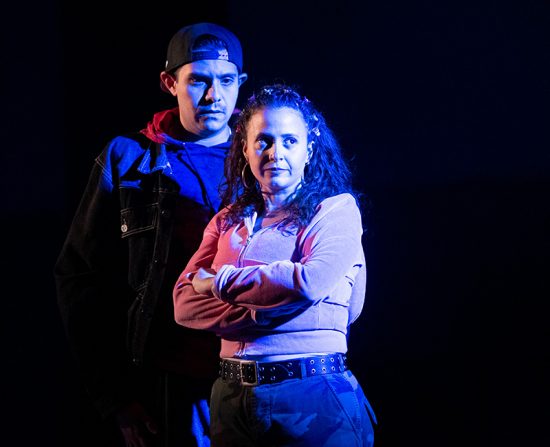 In mid-2000s Newark, there were few good options for the young people we today know as “DREAMers.” DACA would not begin accepting applications for years, NYC was over a decade out from passing a Sanctuary City policy, and the DREAM Act was little more than a pipe dream, stalled in Congress as it remains today. In this dreary context, the ironically-named “Sanctuary City” introduces us to two teenagers, both with tenuous immigration status. Beginning with bittersweet whimsy as it flutters through years of memory, this co-production with the Berkeley Repertory Theatre builds to a sizzling climax on New Year’s Eve, 2006. Pulitzer Prize-winning playwright Martyna Majok’s newest play is a biting indictment of US immigration policy and a bleak but captivating time capsule of the 00’s.

…spellbinds…the tight pacing will hold you on the edge of your seat.

B (Hernán Angulo) and G (María Victoria Martínez), the nameless central characters, share a teenage friendship beyond normal depths. There’s something unconditional and intuitive in the nights G—fleeing an abusive stepfather—crawls into B’s twin bed with nothing but their ritual exchange of “thank you” and “it’s okay.” Both came to the US with their mothers when as young children, but while B’s mom overstayed her visa years ago, G’s mother earns U.S. citizenship—automatically conveyed to minor dependents—right before G turns 18, leaving them with vastly different status and corresponding opportunities. When G goes to college, B starts an under-the-table, dead-end job, and the distance between the once-steadfast friends creeps in.

Martyna Majok’s pacing is initially abrupt, as the script flits back and forth across months and years, introducing us to B and G as high schoolers. The actors rarely leave the stage, using a punch of music and lighting to indicate scene breaks. Three years after graduation, B and G unexpectedly reunite at New Year’s and that evening plays out without the time skipping characteristic of the earlier acts. Tense and uninterrupted, this final movement of “Sanctuary City” holds audiences in a firm grip as secrets spill out. Without laboring the point, Majok depicts the vulnerabilities to wage theft and familial abuse created by the US immigration system in between the mundane teenage burdens of math homework and prom dates. Deep and hopeless dramatic irony stretches over “Sanctuary City,” as characters swear in one hundred years, they’ll never see the policy reforms that audiences know come only a handful later.

David Israel Reynosos’s set evokes a run down gymnasium or community center. Water damage and peeling paint mar old walls, and the transparent front doors are chained and padlock, perhaps in subtle symbolism. An abstract location of American mediocrity, the set comes to life in a handful of scenes, including a high school prom where embedded fairy lights glow on the walls and disco balls twirl overhead. Reynosos also designed the costumes, which clearly evoke the time period. G wears a pink velour tracksuit top and camo pants with a studded belt—on trend for the decade—and, in a backwards baseball cap and hoodie, B appears appropriately adolescent.

Lighting design and sound design by Cha See and Fan Zhang respectively work in tandem to keep the audience apace with the rapidly traversed timeline. A square grid of lights floats above the stage, outlined from below by a backlit grill embedded in the floor. The nights G & B share a bed, the actors are spotlighted in blue light on a dark stage, standing shoulder to shoulder. Hazy red light gives transitions a dream-like quality as formless music accompanies.

With just three actors, “Sanctuary City” spellbinds in its no-punches-pulled, one-act drama. A compelling argument for immigration reform, it makes visible struggles that were too long hidden from the public eye. The hopelessness and desperation in Majok’s script makes this heavy viewing, but the tight pacing will hold you on the edge of your seat. Here’s hoping policymakers make their way to Arena Stage for this production.

Running time: One hour and 40 minutes with no intermission.

“Sanctuary City” runs through November 27, 2022 at Arena Stage, The Mead Center for American Theatre, 1101 Sixth Street SW, Washington, DC 20024. Tickets can be purchased by calling the box office at 202-488-3300, Tuesdays–Sundays, 12 -8 p.m. or online. COVID Safety: Arena Stage requires that patrons, staff, and volunteers wear facial masks inside the Mead Center, unless actively eating or drinking, regardless of vaccination status.