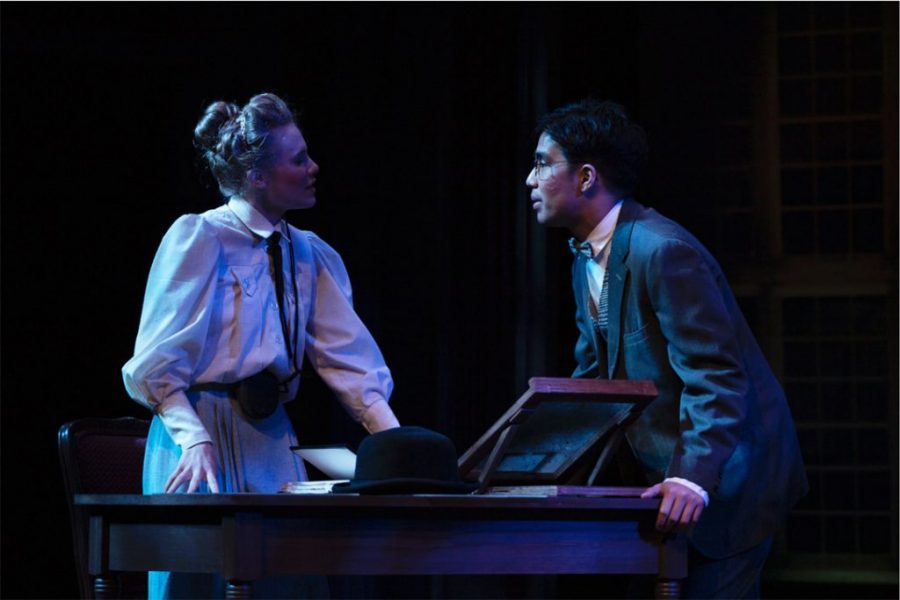 Did you know there were female astronomers working at Harvard in the early 1900s? “Silent Sky” by Lauren Gunderson tells the story of one of these astronomers, Henrietta Leavitt, who makes a discovery that changes astronomy forever. Although this play takes place over 100 years ago, the themes are still relevant today —gender equality and work/life balance. It truly opens our mind to a universe of possibilities, literally and figuratively.

‘Silent Sky’ celebrates women in a time when women were seen merely as ‘computers.’

Henrietta Leavitt (EJ Roder) leaves her home in Wisconsin to work at the Harvard Observatory. On her first day, Peter Shaw (Eric Panuela) shows her to her desk and tells her women aren’t allowed to use the telescope—they simply work as “computers.” Henrietta’s co-workers, Williamina Fleming (Lindsay Wilk) and Annie Cannon (Brooke Donald), explain that Henrietta’s job is to work with photographic star plates to maintain the largest stellar archive in the world. Henrietta is so engrossed in her work, she ignores her sister Margaret’s (Mel Gabel) letters from home until she finds out her father is sick and she needs to be with her family. But what can become of her research if Henrietta is stuck in Wisconsin?

Roder plays her part with spunk and passion, saying what’s on her mind and ignoring gender stereotypes. Panuela is perfectly cast as Shaw, completely unsure of himself around the women but trying to assert himself. Wilk and Donald play off each other in their roles—Wilk is the warm, maternal colleague and Donald is stricter and more serious.

Although the subject is serious, the play is also funny. When Shaw looks at the plates and thinks he sees a new star, Williamina notes that it’s a scratch, but they can name it after him if he wants. When Shaw states that “he mind is sexless and so is the sky,” he gets nervous about the number of times he says sex. Henrietta also remarks that she admires Shaw’s “persistence and gait… he has a nice gait.”

Although this is a play about gender equality, ironically, the biggest audience reaction was when Shaw and Henrietta kiss. This definitely made the play more entertaining although I’m not sure if it advanced feminism or set it back.

The juxtaposition of Margaret at home raising her family and Henrietta working all the time and ignoring everything around her is interesting. Ironically, it’s Margaret’s love of music that eventually sparks the idea for Henrietta that the stars’ pulsing has a rhythm. Henrietta must foresee the future because she’s able to work remotely for years.

Lighting has a big part in this play, and Jay Herzog does a beautiful job with the lighting design. Lightbulbs function as stars, and these stars need to pulse just like Henrietta’s cepheids. The costumes by Julie Potter transport the audience to the 1900s and the scenic design by Kai Hopkins is subtle but important, using projections in the background to show us where we are.

“Silent Sky” celebrates women in a time when women were seen merely as ‘computers.’ Henrietta says it perfectly when she states, “the sky’s the limit—and there’s just so much of it.”