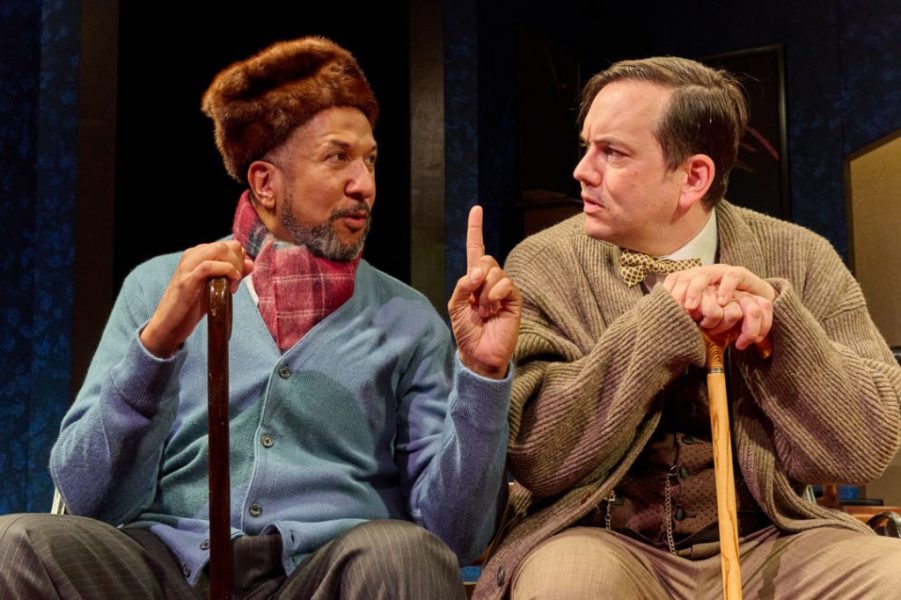 Adapted in 1973 by Neil Simon from Anton Chekhov’s short stories, most of the vignettes in “The Good Doctor” hold up surprisingly well and still evoke laughter and tears from a modern audience. In his program note, Artistic Director Bill Largess compares Simon to Chekhov by citing Chekhov’s “obvious affection for even his most foolish characters.” Both playwrights “give us people who are their own worst enemies and present them unsparingly, without judgement.” Directed by Laura Giannarelli, a founding member of the Washington Stage Guild (WSG), “The Good Doctor” is very entertaining and unexpectedly moving.

Ten vignettes are framed by comments from The Writer (Cameron McNary), a stand-in for Chekhov.  McNary’s wry presentation leads us into a warm play written for a gentler time. The one-set design (Joseph B. Musumeci, Jr.) ingeniously provides a study, a drawing room, a surgery, and a waterfront street all by removing a ghostly chair covering or changing the color of the backlighting. Sígrid Jóhannesdóttir’s lovely costumes convey the period in warm hues of brown and rose.

All the scenes feature characters reaching out for human connection and understanding via a variety of tone including dramatic realism, comedy, and farce. Some are a bit cringey for contemporary sensibilities, such as “The Arrangement” where a father attempts to help his son grow up by providing him with a prostitute on his birthday—the director wisely left the play set at the turn of the 20th century. “The Sneeze” is a bit hard to watch coming out of a pandemic of a respiratory disease. Most of the scenes are timeless depictions of people in all their loneliness, greed, and vanity.

This is a true ensemble piece and all the actors create entertaining and engaging characters. Lynn Steinmetz (WSG founding member) shines in “The Governess” as a selfish employer who really has her young employee’s best interests at heart. Steinmetz then turns around and wows us with her hilarious portrayal of a desperate woman seeking financial redress from an unsuspecting bank manager in “A Defenseless Creature.”

After some over-the-top characterizations in Act One, Scott Harrison is strongest as he opens Act Two in “The Drowned Man.” His performance as a sleazy huckster performing “drownings” for passers-by with money to spend makes the scene resonant with laughter because here the actor gives his most controlled performance. The end of the scene makes us swallow our laughs in a sudden gulp.

The most poignant moment in the play comes late in Act One with “Too Late for Happiness.” A lonely man (Morgan Duncan) and a lonely woman (Lynn Steinmetz) meet as they stop to rest on a park bench.  Through song, they attempt to connect and agree to meet again—just not today. As they leave the stage in opposite directions, you know they will not keep that appointment.

Morgan Duncan stands out in every scene he is in, but his brilliant performance as The Army in “A Quiet War” tops the deck. In a side-splitting scene, the story pits two old friends against each other in a war of words describing a fantasy meal. Both actors feed off each other as the dialogue crescendos to their departure in opposite directions. But this time, we know they really will meet again next Tuesday for a rematch.

The recurring theme of missed opportunity echoes throughout “The Audience” but comes to a welcome reversal of fortune when the young actress (Arika Thames) turns the theatre director’s (Cameron McNary) heart around with her audition. Thames’ warm performance as a struggling actor will touch anyone who has ever attempted to launch a career in a competitive field.