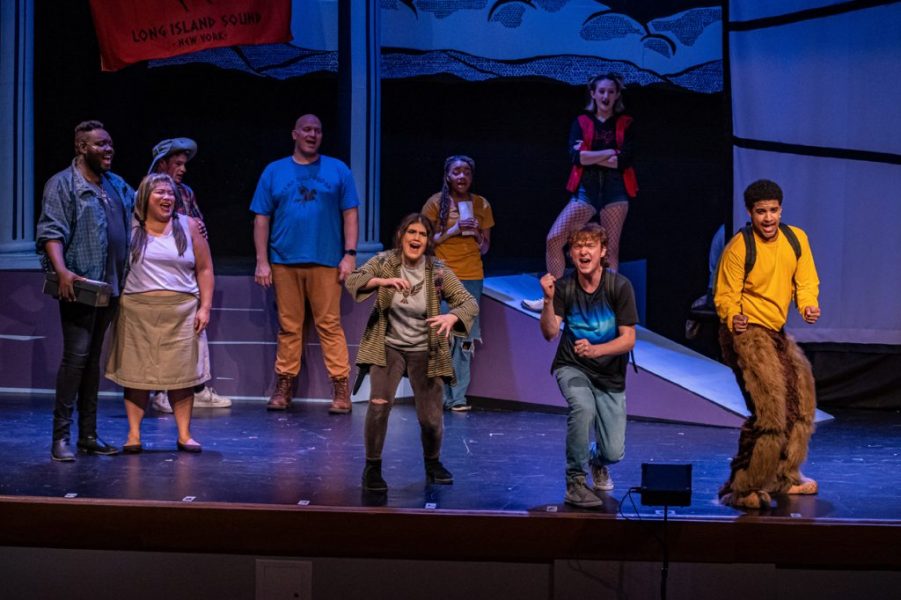 The cast of “The Lightning Thief: The Percy Jackson Musical” Photo by Stasia Steuart Photography.

Just like lightning, “The Lightning Thief: The Percy Jackson Musical” is full of energy. Silhouette Stages’ production has a talented cast of both high school students and adults who know how to light up the stage.

It’s just an ordinary day for Percy Jackson (Reid Murphy) until his substitute teacher calls him over and transforms into a Fury. After Percy vaporizes the Fury with a pen that turns into a sword, he’s expelled from school for failing to stay with the group. This is Percy’s first hint that things are not what they seem.

…a talented cast of both high school students and adults who know how to light up the stage.

Percy’s mother (Cheryl J. Campo) assures Percy that the things that make him different are the very things that make him strong. They run into Percy’s bestie Grover (Nick Thompson) when they’re on the beach, talking about Percy’s absent father. The trio are attacked by a minotaur, and Percy’s mom Sally sacrifices her life for Grover’s and Percy’s. Percy is knocked unconscious, waking up in a place called Camp Half-Blood.

So, what’s Camp Half-Blood? It’s a camp for demigods, the kids of humans and Greek Gods. Dionysus (Ethan Kinstler), the God of wine and madness, checks Percy into camp and looks truly miserable as he tells him ‘it’s just another terrible day.’ Kinstler plays his part well, looking crazy and angry—someone who should definitely not be working at a summer camp. Luke (Otega Okurume) is Hermes’ son. Clarisse (Julia L. Williams) is the daughter of Ares, the God of War. And Annabeth (Leah Freeman) is the daughter of Athena.

Williams as Clarisse shows that Capture the Flag isn’t your usual schoolyard game as she twirls swords like batons and attacks Percy when he’s on the toilet (thanks to fight choreographer, Russell Rinker, the show has some amazing fight scenes). Properties Designer Jessie Krupkin uses toilet paper to signify that Percy employs water to douse his enemies, which brings some fun to the show.

Once Percy discovers he’s the son of Poseidon, he’s told he has to go on a hero’s quest—and his pals Grover and Annabeth decide to join him. But will they be able to stop a war between the big three Gods?

With this fantastical world of monsters and demigods, this is not an easy show to put together visually. Costume Designer Deana Cruz-Conner does a great job of creating the minotaurs, the Furies, the three headed beasts, and yes, even the talking squirrel. Apart from all the monsters, there’s Mr. Brunner (Christopher Kabara) who’s a centaur and Grover who’s a satyr, and both are believable in their roles. There are also plenty of other surprises from Cruz-Conner. The ferrywoman of the underworld is a diva in a glitzy costume, and Hades, the king of the underworld, has a unique style all his own.

‘”The Lightning Thief: The Percy Jackson Musical” is also surprisingly funny. When the trio encounter Medusa, they box up her head and send it via the Hermes Messenger Service. When the Oracle tells Percy to go west, he figures the underworld must be in Los Angeles. And when the trio (Percy, Annabeth, and Grover) get to the underworld at DOA Records, they encounter Mozart, James Brown, and the Vienna Boys Choir.

“The Lightning Thief: The Percy Jackson Musical” takes us to a magical place full of gods and monsters. And it teaches us a lesson too. Percy might have ADHD and dyslexia, but he can still be a demigod who completes an important quest. The dyslexia shows Percy’s mind was hard-wired for ancient Greek, and the ADHD that he would be ready for the battlefield. These are shown as strengths, not obstacles. So bring on the monsters and bring on the real world.