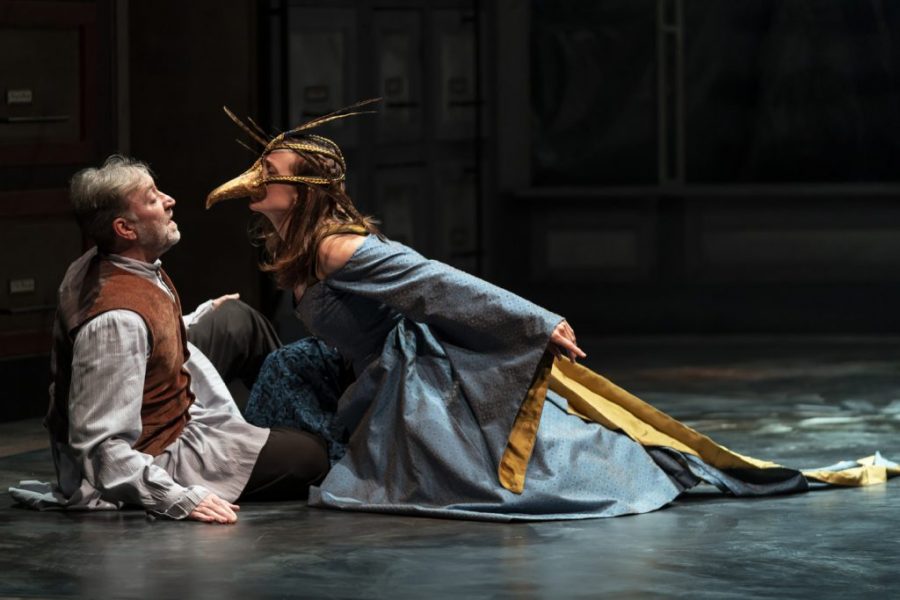 Christopher Donahue and Kasey Foster in “The Notebooks of Leonardo da Vinci.” Photo by Scott Suchman.

Chicago’s Mary Zimmerman is no stranger to the D.C. stage. Her productions of “Moby Dick” at Arena Stage and “Argonautica” at the Shakespeare Theatre Company come vividly to mind. What is easy to forget is her roots are in experimental theatre in which you ditch the flashy fabric-seas, avoid the cutesy, hip-hop stylings of classic verse, forget the concept of a narrative even, and let the human body be the entire spectacle.

…a wonder for the eye…inspire a newfound respect for her work and her [Mary Zimmerman’s] unique theatrical aesthetic.

Zimmerman’s revival of “The Notebooks of Leonardo Da Vinci” is a wonder for the eye, precisely because of her reliance on pure movement, and her trust in the innate athleticism of the performing artists assembled. Throughout the 90+ minutes of this show, she offers you glimpses of Da Vinci as he is, warts and all, with many a finely-choreographed pas-de-deux (or trois, etc.) to illustrate—and sometimes undermine—the many theories and conceits of a historical figure who is arguably our prototypical Renaissance Man.

Each actor takes turns reciting entries from the notebooks—in fact, the entire cast is identified simply as “Leonardo.” As we get acclimated to this literally multifaceted artist, we watch as each actor/Leonardo embodies the fertility of Da Vinci’s mind as he expounds on topics as diverse as astronomy, perspective, balance, physics—you name it. When Leonardo isn’t offering theories of motion that predate Isaac Newton by a century, he’s explaining how a white dress absorbs colors around it, depending on where it is set.

There are what one might call themes and variations—a vision from childhood in which a falcon inspires him, and a memory of discovering a cave, together with his memory of the mixture of fear and desire with which he enters it. Throughout, there is a sense of that child-like curiosity for all things around him, and the notebooks range far and wide indeed.

At the core of the show is the actors themselves. In some cases, we see a Leonardo who participates directly in a stage exercise that illustrates the ideas she is reciting. Actors sitting in the audience will instantly recognize some of the techniques involved here, which are beautiful to watch and which often have their origins in warm-up and trust exercises from the training studio. This harmonizes perfectly with the idea of the notebook—a place where you flex your mental muscles, try out this and that, see if an idea is well-balanced enough to last.

Another feature which is fascinating is the multi-layered nature of some key scenes here. To take in the full significance of some of Da Vinci’s thoughts, you need to look beyond the actor reciting the notebook entry and look elsewhere on the stage.

At times, the ensemble not only comments on, but also undermines, Da Vinci’s conceits. In one truly hilarious sequence, a pair of star-struck, teenage girls gossip in Italian about their idol, Michelangelo, whereupon a disgruntled Leonardo (Christopher Donahue, this time) enters and proceeds to portray sculptors in the most unflattering terms imaginable. Upstaging Leonardo, however, is cast member Anthony Irons, standing in the pose of Michelangelo’s “David,” performing slow-motion pantomimes behind his back in a manner that would do the Marx Brothers proud.

Scott Bradley’s scenic design offers a “cabinet of curiosities”’ with massive drawers used for any number of purposes, along with hanging bars for a variety of stunts. Michael Bodeen’s occasional chamber music score creates a sweetness to the atmosphere, suiting the era, while Mara Blumenfeld’s costumes alternately evoke the Renaissance and Steampunk era.

Zimmerman’s work has not always resonated with audiences here, but this production is quite different from what we’ve seen in the recent past. I’m tempted to say that especially, if you weren’t impressed with her more conventional fare over the years, “The Notebooks of Leonardo Da Vinci” might inspire a newfound respect for her work and her unique theatrical aesthetic.

“The Notebooks of Leonardo Da Vinci” has been EXTENDED through October 29, 2022 at the Shakespeare Theatre Company in the Michael R. Klein (formerly the Landsburgh) Theatre, 450 7th Street NW, Washington, DC 20004. For more information and tickets, call 202-547-1122, or click here. Masks are currently required for all patrons, including during the performance, except when actively eating or drinking in the lobby.