Theatre Review: ‘The Trip to Bountiful’ at Ford’s Theatre 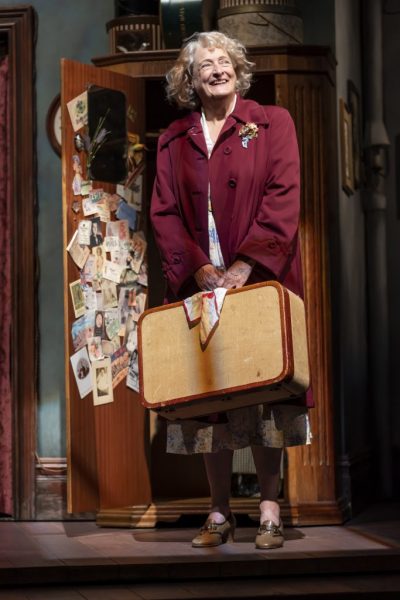 Nancy Robinette as Mrs. Carrie Watts in the Ford’s Theatre production of Horton Foote’s “The Trip to Bountiful,” directed by Michael Wilson.
Photo by Scott Suchman.

Set in the 1950s, American playwright Horton Foote’s “The Trip to Bountiful” is a meditation on memory, the search for meaning, and the need to belong. Seen through a 21st century lens, it is also a commentary on the suffering that results when societal norms force women and men into strict gender roles—denying them the freedom necessary to pursue purposeful lives.

…a dream cast…one of this season’s finest productions.

Desperate to return to her hometown of Bountiful, Texas, Mrs. Carrie Watts (Nancy Robinette) plots her escape from the tiny apartment she shares with her caring son, Ludie Watts (Joe Mallon), and his domineering wife, Jessie Mae Watts (Kimberly Gilbert), in Houston. When Jessie Mae takes a quick trip to the drug store, Mrs. Watts grabs her luggage and heads to the bus station leaving her son and daughter-in-law in close pursuit. Having been largely ignored in life, Mrs. Watt’s quest to reach Bountiful takes on a magical quality when she meets fellow traveler, Thelma (Emily Kester), and a local Sheriff (Marty Lodge) who listen to her and choose not to stand in her way.

Director Michael Wilson has assembled a dream cast. Emily Kester’s notable portrayal of the naïve and kind-hearted Thelma stands in stark contrast to Gilbert’s embodiment of Jessie Mae’s childishness and absence of compassion. Joe Mallon delivers a memorable performance as Ludie, sensitively conveying the character’s concern for his mother and wife, the disappointment he feels in his lack of worldly success, and his deep reticence to examine the past. Nancy Robinette is simply brilliant in the role of Mrs. Carrie Watts.

In Act I, Scenic Designer Tim Mackabee puts the Watts family in a two-room apartment filled with modest furnishings and inexpensive knickknacks, which serves to emphasize their humble existence.  In Act II, although Mrs. Watts describes her old family home in Bountiful quite extensively, we never actually see it. Rather, Mackabee places Mrs. Watts in a wide open field of tall grass, allowing the audience to imagine the large porch and front parlor as she reminisces about her years in the now abandoned, ramshackle house.

Ford’s Theatre is the ideal venue for this most American of stories that will certainly be remembered as one of this season’s finest productions.

Advisory: The play is recommended for ages 13 and older.

“The Trip to Bountiful” runs through October 16, 2022, at Ford’s Theatre, 511 10th Street NW, Washington, DC 20004. For more information and to purchase tickets, click here. Face masks are required during all mainstage performances for patrons.