Theatre Review: ‘Yours Forever, Lincoln’ by Quarry Theatre at The Voxel 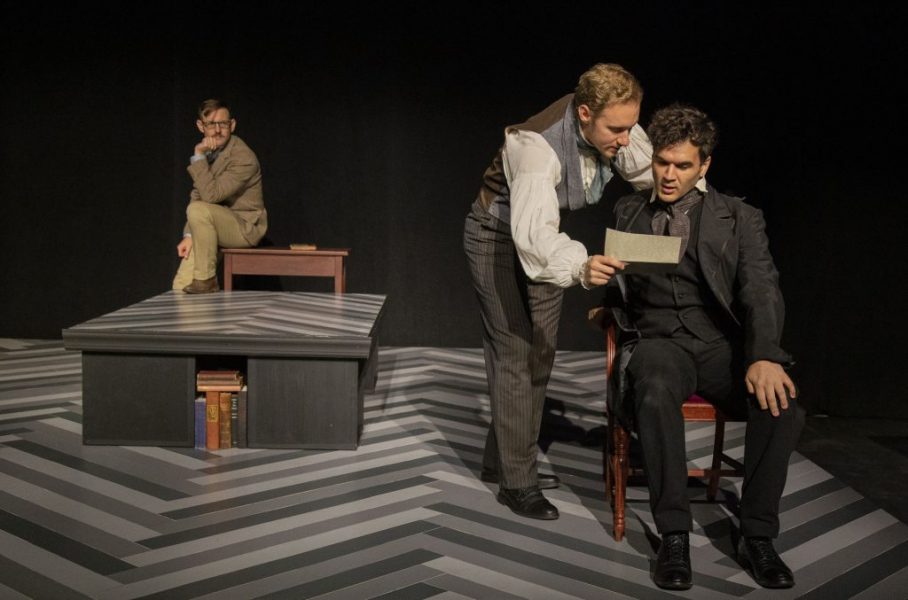 Was America’s 16th president gay? Does it matter?

In the world premiere chamber opera, “Yours Forever, Lincoln,” Quarry Theatre examines its subject in the context of four of his most intimate relationships. Lincoln’s sexuality was a topic of rumor and gossip during his life, and of scholarly research since. “Viewed through a Queer lens,” in the words of composer Patrick Alexander, the evidence is “very convincing” that some of Lincoln’s deeply cherished friendships with men were, at least, partly sexual in nature. This opera pursues ideas about “American revisionist history, and the importance of LGBTQAI+ visibility.” But supporting a theory doesn’t seem to be the central point here. Its director, Ryan Clark, states that the opera “does not attempt to define or identify the 16th president in a specific way, rather, it offers the audience a glimpse into a possible past that might better inform our future.”

…a lovely and evocative evening’s entertainment. There is an aching and yearning grapple with impossibility saturating the piece.

The cast is small. Our guide is a contemporary Biographer played by Joshua Poole. His spoken lines connect and contextualize the performances of tenor Gabriel Hernandez, as Lincoln, and baritone Zachary Bryant, who plays multiple roles as the men in Lincoln’s life. The opera follows a chronological path, opening in 1831 as 22-year-old Lincoln has just left the nest. Arriving in New Salem, he meets Billy Greene, 18, and the two form a tight, personal bond over grammar lessons. This section features quotes by Greene from an 1865 interview in which his physical descriptions of young Lincoln are sexually charged. Next, the action is advanced several years to 1837. Freshly-licensed attorney Lincoln is settling in Springfield where he meets Joshua Speed. Lincoln has leased his first law office and home but hasn’t the funds to furnish it. He asks Speed, a merchant, for credit. Speed instead suggests that the two share accommodations. They do for several years, through both men’s eventual marriages. Speed leaves Springfield at the death of his father and Lincoln is crushed. “I am now the most miserable man living,” declares the 32-year-old, in a heartbreaking aria over sequences of droopy, gooey glissandos. It is Alexander’s most inventive composition of the evening— a melancholic and brooding presentation of melodic and psychic descent.

From there, we skip ahead 20 years to find the now-bearded Lincoln and a much younger Colonel Elmer Ellsworth who would become the first casualty of the Civil War. At this point, we notice that “Yours Forever, Lincoln” has utterly ignored its subject’s political career. No reference is made to his presidency, and this feels like a deliberate and appropriate choice of focus. Even later, as he enjoys closeness with Captain David Derickson, the fact that the latter is head of the president’s team of bodyguards is barely mentioned. Their epilogue, “And That Night I Was Happy,” is presented simply as a story of two people drawn together, sharing each other.

From the first scene, one notices an eclectic, yet fully cohesive, collage of stylistic elements in the production. Musically, Alexander’s compositions lean towards the Modern period. There’s an overall sense of heavy influence by early, 20th century Russian work, both structurally and in its mood. The libretto by Laura Holland and Alexander feels like that of the Romantic period. This is driven partly by subject matter, but chiefly by the voices of its historical source material. By exception, the original writing stands out for its contemporary sensibility, which does a great service to the accessibility of the piece. The physical elements are disparate as well. Wil Crowther’s excellent costumes are period-perfect, covering a 30-year span during the Victorian era, while the gorgeous and understated set by Christopher Crostic suggests a 1990s Ikea kitchen backsplash.

Musically, the highlight of the performance belongs to Hernandez in “Comrades.” Bryant, in turn, shines in “A Streak of Lavender.” Both artists are fine actors and wonderful vocalists. Alexander’s score is executed by a tight seven-piece ensemble, with conductor Christopher Cicconi at the helm. The four strings, two woodwinds, and piano are very well balanced sonically in the space, if just a bit loud at times in accompaniment, especially during Bryant’s singing. Seating at house left (stage right) is recommended to counter this. Lighting Designer JR Schroyer takes great advantage of The Voxel’s ample dimensions and extensive inventory.

The Voxel, formerly the Playhouse Theater, is home to Baltimore’s Figure 53, the company behind QLab, which is the preeminent Mac-based, theatrical sequencing software product. Similar to the Windows-based Show Cue System, QLab has become ubiquitous in the theater community. Its developers operate The Voxel both as a product laboratory and as a residency destination for independent theater companies in the region. It is a well-equipped space that is fully accessible and very flexible.

“Yours Forever, Lincoln” is a lovely and evocative evening’s entertainment. There is an aching and yearning grapple with impossibility saturating the piece. Even the epilogue, whose title hints at joy, is steeped in sorrow behind its smiles.

Advisory: Use of a prop firearm.

“Yours Forever, Lincoln” runs through October 29, 2022 at The Voxel, 9 West 25th Street, Baltimore, MD 21218. Tickets are available online. Patrons are not required to provide proof of vaccination, and the wearing of masks is optional.