Concert Review: ‘Broadway’s Brightest Lights’ presented by the National Philharmonic at The Music Center at Strathmore 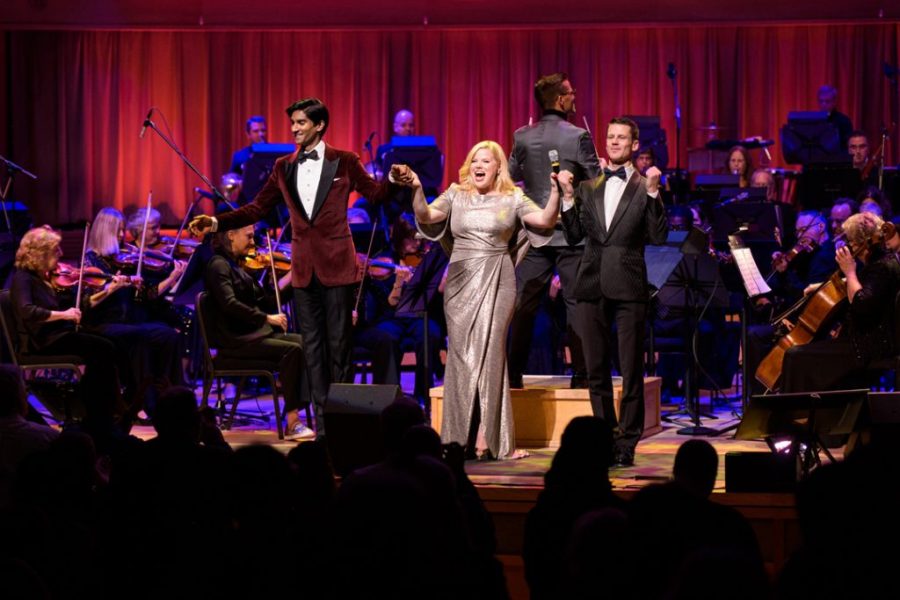 To me, a concert program full of the best of Broadway is like an extensive dessert menu that is ever so satisfying, but somehow never fills you up, making you want for more. If I’m being honest, sometimes I may just want to sit back and be presented with a program of Crème Brulee and Cannoli’s instead of dealing with character development and costumes.

The refreshing part of the program was the innovative interpretations of classic songs by the National Philharmonic and Conductor Frazier, fully embraced by the singers for a totally new experience.

This recent guilty pleasure was satisfied with the accurately titled “Broadway’s Brightest Lights,” performed by three talented performers and accompanied by the National Philharmonic at Strathmore. The Music Center at Strathmore is nationally known, yet doesn’t get enough love in the DMV area. The present home of the National Philharmonic, it is a much sought after venue for artists and vocalists representing many genres. Especially appealing at this venue is the large, rectangular oval of the main stage, replete with high ceilings and an unobtrusive light wood background. The music does not needlessly bounce around the chamber; it tends to hold in the air, lingering for anxious ears to savor.

This short, power-packed program is nurtured by the Philharmonic’s Principal Pops Conductor, Luke Frazier, whose easy grace and charm lent a smooth ambiance to the evening. His love of Broadway classics and the Gershwin Songbook was evident and his enthusiastic introductions to each piece was spot on.

As an introduction, the orchestra gave a rendition of the heralded standard “Give My Regards to Broadway/Broadway Baby” in a medley. The first soloist was rising star Michael Maliakel, who started the evening with “Who Can I Turn To” from the lesser known “The Roar of the Greasepaint – The Smell of the Crowd.” Maliakel has a smooth, understated presence onstage, with his silky baritone and wistful movements. He continued later with a version of “If Ever I Should Leave You” from “Camelot,” even adding the French Madrigal prologue, an extra treat. He then continued with “It All Fades Away” from “Bridges of Madison County,” another lesser known gem. His timing, phrasing, and laid back manner imbued in his performance. The highlight was the pacing and buildup of “Being Alive” from “Company” as he and Conductor Frazier acknowledged the genius of recently departed Stephen Sondheim and his mark on musical theatre.

An unexpected turn of events was the addition of Tap Dancer Luke Hawkins, astride in tuxedo and black satin hoofs. He performed in syncopated rhythm with the orchestra to the whimsical “Ain’t Misbehavin” and later to the staccato beat of “The Trolley Song.” Combining a mixture of tap styles, it was quite a contrast to our crooners, and I wished the full audience could see his footwork without the tele-prompters and feedback amps.

The second powerhouse singer for the evening was Megan Hilty, known for her work on Broadway as Glinda in “Wicked” and her stint as Patsy Cline. A versatile singer who has an impressive range, she can belt it out yet as easy power, allowing changes in vocal tone effortlessly, as in “Popular” from “Wicked,” going back and forth between a teen and adult voice. Later she combined Streisand tunes with medleys of “Before the Parade Passes By” and “Don’t Rain on My Parade.” Adorned in three-inch pumps and a gown to die for, she was the sweetheart diva.

The refreshing part of the program was the innovative interpretations of classic songs by the National Philharmonic and Conductor Frazier, fully embraced by the singers for a totally new experience. Hilty reinvigorated the folksy “Beautiful City” from “Godspell” into a blaze of emotion, a riveting call to visualize the promise contained in the song.

It was great night out and a sweet finish. Look for more delicious offerings on the Strathmore and National Philharmonic schedule.

Run time: One hour and 20 minutes without an intermission.