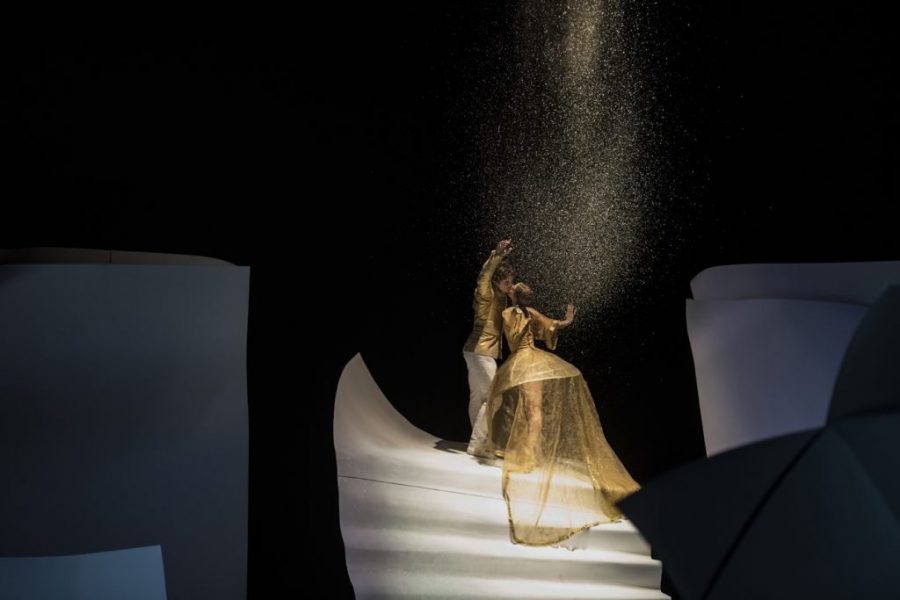 Ah! The French Riviera, Monte Carlo, and we are reminded of private yachts in the harbor, European race cars on mountainous roads, a famous gambling casino, and Princess Grace with her Royals. Add to that glamorous list a topnotch ballet company that made its Kennedy Center debut last night. Indeed, Les Ballets de Monte-Carlo, celebrating 30 years as a successful dance company, presented Jean-Christophe Maillot’s fresh take on “Cendrillon” (“Cinderella”) with wildly imaginative costumes that would impress Lady Gaga and Ru Paul.

Gold dust shimmers over this production, from beginning to end, leaving us with a big smile and hope for a return soon.

Sparkling gold dust falls from the rafters at the opening of the full-length ballet, set to a mix of Prokofiev classics—music from “Romeo & Juliet” keeps popping up during Cinderella’s dancing. As the heroine, Alessandra Tognoloni is thrown into her role as the curtain opens. Cinderella, holding in her arms the dress her mother was wearing for her last ball, sobs and looks out in the distance. She remembers her parents dancing a loving pas de deux. But there’s no time to waste in this version—no sweeping the floor or bickering with her step-sisters, Victoria Ananyan and Ksenia Abbazova, portrayed as sexy seducers rather than the usual goofy men in drag.

While Maillot keeps to the basics of the “Cinderella” story, he digs much deeper into her relationship with family. Her father hesitates between the desire to protect her and the duties to his new wife (Anna Blackwell) who vamps all over the stage, begging to be noticed by a younger, richer lover. Within minutes in the first act, a mysterious courtesan brings an invitation from the Prince for the court ball. The pre-partying begins with dressers, hair and beauty stylists—all ready to create a new princess.

One of the most interesting characters in this play without words—just movement, mime and fashion fun—turns out to be Cinderella’s mother, re-incarnated as the Fairy. Marianna Barabas is fascinating to watch as she shimmers and shines in a prize-winning costume, something out of a futuristic Jetson’s closet. With her outstanding technique, she moves the story forward without unnecessary steps. By the end of the first act, the godmother/mother fairy has walked Cinderella to the ball where she joins her prince charming in playful choreography that suggests first love. Wearing her mother’s white silk dress, Cinderella is a modern young woman with sparkling foot stockings (not slippers). It turns out that the prince has a foot fetish and finds his darling by checking the village for a well-developed thigh. Many humorous moments fill the ballet’s quiet transitions. While this version may not be suitable for little ones who are familiar with the traditional fairy tale, it’s a definite plus for the rest of us. Go and you’ll see yourselves in the quirky story that spoofs social media, indulging in heavy drinking, and goofing off.

Before closing, we can’t forget those fabulous costumes designed Jerome Kaplan who has worked with Alexei Ratmanski, some say the best choreographer of story ballets. There were many similarities in Ratmanski’s Russian ballets and “Cendrillon”—witty dances and especially the colorful costumes for both artists. One more nod to the choreographer. Maillot is a brilliant restorer of fairytales, and here he strips away any superfluous movement to let the purity of dance (a ballet with contemporary movement) shine through. He proves that a classic doesn’t always have to be classical ballet.

Running Time: Two hours with one 15-minute intermission and a five minute pause.

“Cendrillon” runs through November 20, 2022 by Les Ballets de Monte-Carlo in The Eisenhower Theater at The John F. Kennedy Center for the Performing Arts, 2700 F St NW, Washington, DC 20566. For more information and tickets, call the Box Office: (202) 467-4600. Toll-Free:(800) 444-1324 or go online. Check for Saturday’s Student Rush for discounted tickets. Masks are optional in all Kennedy Center spaces for visitors and staff.

Next up is the Kansas City Ballet in “The Nutcracker” Wednesday, November 23, 25-27, 2022. If you visit the Kennedy Center over the holidays, don’t miss the free exhibit, “Arts and Ideals.” Located in the heart of President Kennedy’s living memorial, this immersive exhibit uses the latest in digital technology to explore how the arts infused and informed the Kennedy presidency.

“The life of the arts, far from being an interruption, a distraction, in the life of a nation, is very close to the center of a nation’s purpose.” – President John F. Kennedy