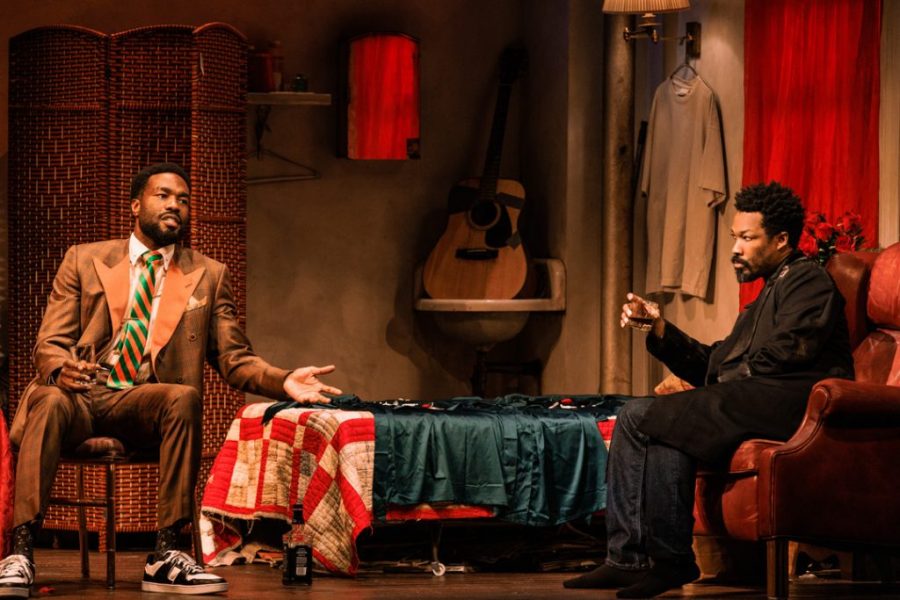 Yahya Abdul-Mateen II as Booth and Corey Hawkins as Lincoln in “Topdog/Underdog” at Golden Theatre. Photo by Marc. J. Franklin.

Dozens of theater critics, writers, and bloggers gathered in Manhattan, November 11-13, 2022, the first time that American Theatre Critics Association (ATCA) members have convened since pre-COVID. What a treat to be back in New York City for this unique conference, “Reseated and In Person.”
Friday’s session offered a conversation with The New York Times chief theater critic, Jesse Green, on his recent biography, “Shy: The Alarmingly Outspoken Memoirs of Mary Rodgers,” a reflection of her life with her father, Richard Rodgers, and more.
Over the weekend, we discovered current Broadway trends, and shared stories of our own writing with critics from faraway regions in North America. A bonus was the Saturday morning tour of the historic Hudson Theatre, currently the home of Broadway’s latest production, “Death of a Salesman.” Timothy Dolan was our tour guide with his “petit histoire,” tales of May West, Sarah Bernhardt, and other theater goddesses delighted our group.
When we were not taking notes at the conference, the lucky ones with tickets were jotting down thoughts on plays and musicals. I managed to buy half-priced tickets at TKTS Lincoln Center for “Leopoldstadt,” Tom Stoppard’s personal look at Vienna from the late 1800s-1950. It’s a beautiful pastiche of a Jewish family holding on to the belief that they are safe in their home. I plan to return over the Christmas holidays and treat my family to this not-to-be-missed play that celebrates tradition and hope.
Running Time: Approximately two hours without intermission.
“Leopoldstadt”  has a limited run at the Longacre Theatre, 220 W. 48th Street, NYC 10036. For more information, click here.
The Saturday matinee of Suzan-Lori Parks’ “TOPDOG/UNDERDOG” rocked me to the core. Corey Hawkins (Lincoln) and Yahya Abdul-Mateen II (Booth) are certain to be Tony-Award nominees with their brilliant acting. They portray two brothers who struggle with their parents desertion and being the best at hustling and throwing cards for bets.
The words are rough and the rap insistent, but the message is clear and meaningful: “Winning is everything.” They are con men who live large when at the top. Directed by Tony winner Kenny Leon, you soon realize that one will tumble. Or perhaps both.
Running Time: Two hours with one 15-minute intermission.
“TOPDOG/UNDERDOG” is playing at the Golden Theatre, 252 W. 45th Street, NYC 10036. For more information, click here.
For discounted tickets for both shows, go to TKTS Lincoln Center, 661 W. 62nd Street, NYC 10023. You can also buy 50% tickets for the following day.
We said goodby to our ATCA friends at the Hard Rock Hotel’s Audacy Sound studio, a high-tech room where we honored young writers and listened to young recording artists. I couldn’t leave The Big Apple without taking a bite of a dance concert. Fortunately, the Paul Taylor Dance Company was performing new works and the revival of “The Green Door,” one of the most powerful works in the history of political art, at the Lincoln Center.
The program opened with “Arden Court,” with Taylor’s trademark skips, turns, and jumps on to other dancers. The costumes are pretty pastels, thanks to Gene Moore, and the movement, always exciting to watch. As a bonus, the music by William Boce was live, performed by Orchestra of St. Luke’s under the watchful eye of Tara Simoncic, Conductor. First performed in 1981, this work remains fresh and fun for all. Jennifer Tipton deserves praise for the lighting of nine dancers bouncing all over the stage.

No dance troupe generates more excitement than Taylor’s troupe. Anyone who catches these shows will have no trouble understanding why.

“Suite From The Hours” turned out to be a showcase for the musicians since there were no dancers on stage. Dance fans appreciated the spellbinding three movements in Phillip Glass’ 2002 composition. Both Conductor David LaMarche an Pianist Margaret Kampmeier received standing ovations while folks were busy reading the “The Green Table” set behind the closed curtain. No dance troupe generates more excitement than Taylor’s troupe. Anyone who catches these shows will have no trouble understanding why.
The closing piece opened with a group of world leaders and war mongers banging and posing on the table. Kurt Jooss’ “The Green Table” is one of the masterpieces of twentieth-century dance. Its message of the futile, relentless tragedy of war is universal in its humanitarian appeal. It seemed appropriate the G-20 meeting was going on at the same time as the concert.
With Paul Taylor’s dancers you can count on humor even in an anti-war ballet. Hermann Markard created grotesque masks and designed lighting to highlight the macabre. Shawn Lesniak danced a Devine “Death” solo, all sparkly in his red and white costume designed by Hein Heckroth. The pianists Margaret Kampmeier and Blair McMillen added their own tragic touches to the score by F. A. Cohen.
Running Time: Two hours and 20 minutes with two 20-minute intermissions.
Let’s hope they bring this ballet gem to the Kennedy Center next season. Otherwise, check the Paul Taylor Dance Company website for upcoming concerts. I plan to catch the company next spring in Philadelphia, April 22-23, 2023.