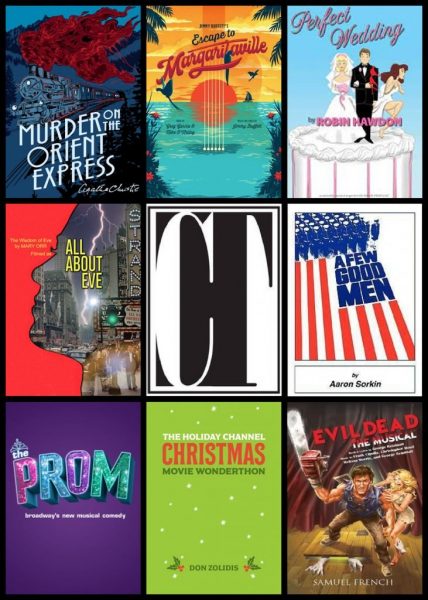 FOR IMMEDIATE RELEASE – The Cumberland Theatre has announced their 2023 Main Stage Season and season passes are now available for purchase. The theatre will celebrate its 35th anniversary in 2023 and an exciting line-up of shows has been planned as well as youth productions, readings and other events.

The season will open in February with the Agatha Christie mystery Murder on the Orient Express. The adaptation by Ken Ludwig features a familiar tale with a dose of comedy. Just after midnight, a snowdrift stops the Orient Express in its tracks. The luxurious train is surprisingly full for the time of the year, but by the morning it is one passenger fewer. An American tycoon lies dead in his compartment, stabbed a eight times, his door locked from the inside. Isolated and with a killer in their midst, the passengers rely on detective Hercule Poirot to identify the murderer – in case he or she decides to strike again.

In March, the theatre will produce The Wisdom of Eve. Adapted from the story by Mary Orr, on which the film All About Eve starring Betty Davis is based. An engrossing and revealing “inside” story of life in New York’s theatre world, told in terms of an unscrupulous ingenue’s rise to Broadway stardom. When we first meet Eve Harrington, she is standing in the rain by the stage door of the theatre in which the renowned Margo Channing is starring in her latest long-run hit. Waiting for a glimpse of her professed idol, she accosts Karen Roberts, Margo’s good friend and inveigles an invitation to meet the great actress herself. The meeting leads to unexpected opportunity as Margo, struck with Eve’s “sincerity,” takes her on as a personal secretary. Then Eve begins to move ahead in earnest, her true character emerging as she lies, cheats and blackmails her way to Broadway stardom—and then a Hollywood career—leaving the wreckage of her friends’ trust behind her.

The season will continue in May with the Tony-award winning musical The Prom. Recently adapted into a feature film starring Meryl Streep, James Corden and Nicole Kidman, the show tells the story of four eccentric Broadway stars who are in desperate need of a new stage. When they hear that trouble is brewing around a small-town prom, they know that it’s time to put a spotlight on the issue…and themselves. The town’s parents want to keep the high school dance on the straight and narrow—but when one student just wants to bring her girlfriend to prom, the entire town has a date with destiny. On a mission to transform lives, Broadway’s brassiest join forces with a courageous girl and the town’s citizens and the result is love that brings them all together. Also, winner of the Drama Desk Award for Best Musical, The Prom expertly captures all the humor and heart of a classic musical comedy with a message that resonates with audiences now more than ever.

June will take audiences behind the scenes of the perfect day gone wrong with the comic farce Perfect Wedding. Performed in literally hundreds of theatres throughout Europe and the United States, the show shines a light on an appalling situation. A bridegroom wakes on his wedding morning in his own bridal suite, with his bride-to-be about to arrive any moment, and finds a strange girl in bed beside him. What’s more an extremely attractive girl whom, in the depths of his post stag-night hangover, he can’t remotely remember even having been introduced to. Worse – during the ensuing panic to get the stranger dressed and out of the way, the bride arrives. The only way out of the dilemma is to persuade the best man to pretend that the hidden girl is his girlfriend. By the time the bride’s parents and half the hotel staff get in on the act, the chaos reaches nuclear proportions!

The summer musical will be Escape to Margaritaville, which will run the entire month of July. The show is a musical comedy featuring the most-loved Jimmy Buffett classics, including “Cheeseburger in Paradise”, “Margaritaville,” “It’s Five O’Clock Somewhere,” “Fins,” “Volcano,” and many more. With a book by Emmy Award winner Greg Garcia (“My Name is Earl,” “Raising Hope”) and Emmy nominee Mike O’Malley (“Survivor’s Remorse,” “Shameless”), this hilarious, heartwarming musical is the summer party everyone has been waiting for!

The courtroom drama A Few Good Men by Aaron Sorkin will follow in September. This Broadway hit – Sorkin’s groundbreaking debut – tells the story of a group of military lawyers assigned to defend two Marines in Guantanamo Bay. During the course of the trial, they uncover a high-level conspiracy designed to eliminate weaker soldiers in the name of patriotism. The play was made into an award-winning film in 1991 starring Tom Cruise, Demi Moore and Jack Nicholson.

Evil Dead the Musical will run during the month of October – just in time for Halloween. This hilarious show takes all the elements of the cult classic films The Evil Dead, Evil Dead 2 and Army of Darkness and combines them into one of the craziest theatrical experiences of all time. Five college students go to an abandoned cabin in the woods and accidentally unleash an evil force that turns them all into demons. It’s all up to Ash (a housewares employee turned demon-killing hero) and his trusty chainsaw to save the day. Blood flies. Limbs are dismembered. Demons tell bad jokes … and all to music.. It’s the only show with a “Splatter Zone”—a section of the audience that gets covered in fake blood. The show played off-Broadway in New York, has broken records in Toronto, has won awards in Korea and has had more than 200 productions mounted across the globe.

Finishing out the season in December will be The Holiday Channel Christmas Movie Wonderthon, a comical parody of holiday romantic comedies – told all at once! Audiences will travel to Hopewood Falls, Vermont, where singles in adorable sweaters converge to look for love. Can disguises help royalty and/or movie stars find the down-to-earth connections they crave? Will evil city slickers destroy charming inns and/or Christmas tree farms? Isn’t it a little creepy for a meet-cute to depend on one person being in a coma? Audiences will find out in this wildly entertaining show!

Also, announced for 2023 are the Stars of Tomorrow youth actor productions which will take place in April and November. The theatre will produce SpongeBob SquarePants the Musical in the spring and Rudolph the Red-Nosed Reindeer for the holiday season.