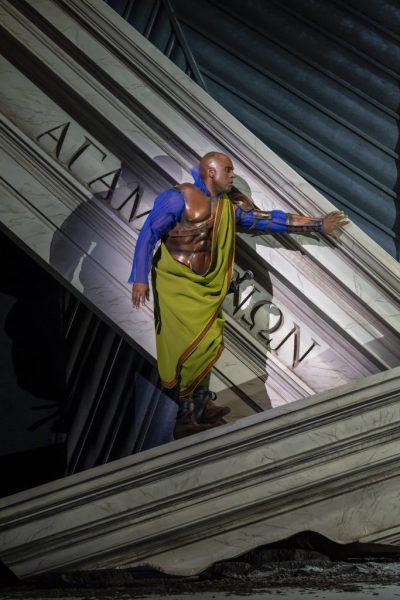 “It is so terrifying that my soul wants to be extinguished.” So sings Klytämnestra on stage. The same might be said of Richard Strauss’ ability to bring the “pity and fear” (catharsis) of Greek tragedy (in the words of Aristotle) to the world of German opera. This spirit of mingling cultures and eras is carried over well in the current Washington National Opera (WNO) production of “Elektra.”

Audiences at the Kennedy Center have a rare opportunity to experience a modern opera with a classical Greek narrative framework in Richard Strauss’ “Elektra.” While the liberetto was written by long-time Strauss collaborator Hugo von Hofmannsthal, much of the story of Elektra originates in the third play from Aeschylus’ trilogy “The Oresteia.” The saga here concerns the aftermath of Greek warrior Agamemnon’s return home to his wife Klytämnestra and his daughters Elektra and Chrysothemis. Klytämnestra, angered by Agamemnon’s earlier sacrifice of their daughter Iphegenia so that the Greek army might set sail for Troy, has taken a lover Aegisth and committed regicide.

Unlike the original Greek tragedy in which Elektra’s brother Orest is the dominant figure in avenging their father’s death, in Strauss’ operatic version, Elektra does not merely wait. She actively seeks vengeance, performing a subtle enticement to Aegisth to enter the palace, where he, like Klytämnestra, will also await his fate. The opera may start off slowly for some, but it builds to a crescendo dramatically and musically to the point at which Elektra “dances herself into a frenzy,” to quote the synopsis by WNO dramaturg Kelley Rourke in the Kennedy Center program.

Like the opera itself, the brilliant set design by Erhard Rom in this magnificent WNO production combines both classical and modernist features—after all, “time tumbles from the stars,” as Elektra sings as the music falls and tumbles in the opera itself. On the far left of the stage, the name Agamemnon is engraved in Greek letters on the broken, Parthenon-style building in ruins, symbolic of the chaos which now reigns in Agamemnon’s court as the king is no more. In the background, a plain gray tilted stone wall effectively serves as a screen to project Agamemnon’s face as Elektra sings poignantly of her father. On the far right, a proud, imposing classical column is placed to represent the pride of Greek warriors and classical Greece as a living culture. Thus, the set juxtaposes modern, abstract elements with classical Greek architecture while a stylized, open corridor represents the interior of Agamemnon’s palace. Rendering the set design even more epic, conductor Evan Rogister is highly effective in his evocation of the monumental, full sound which is a hallmark of the Strauss orchestral style.

Yet it is the glorious voices and acting abilities which bring “Elektra” to life. As Elektra, soprano Christine Goerke sings and enacts her part powerfully, quite in contrast to the figure of the ever-waiting Elektra of Aeschylus. Portions where she seeks to enjoin her sister Chrysothemis in her quest for revenge are particularly noteworthy and moving. Soprano Sara Jakubiak as Chrysothemis is wonderfully engaging as her character seeks to escape the tragic fate of the House of Atreus in favor of marriage, children, and a normal life. Klytämnestra embodies a queen despised by other characters in the play because of the murder of her husband, but mezzo-soprano Katarina Dalayman’s energetic singing and unfaltering acting in the role render the character sympathetic in unexpected ways.

For his part, bass-baritone Ryan Speedo Green sings his part of Orest with determination and power.  His German diction is unusually clear, to the point that those who know German need not look to the surtitles for many of his utterances.

A wonderful moment is the sudden comic relief with a happy, naïve theme as Elektra comically convinces Aegisth to go into the palace to join the “celebration.” Dressed in crown and golden gown and seeming inebriated, Aegisth (portrayed and sung believably by tenor Štefan Margita) does so. The waltz enhancing comic relief is Strauss, but the achievement of the successful comic effect is that of Francesca Zambello, whose artistic direction of the opera—like the whole production—is superb. “Elektra” is warmly recommended for those who adore classical Greek literature, German opera, and great art.

Run Time: One hour and 40 minutes without intermission.