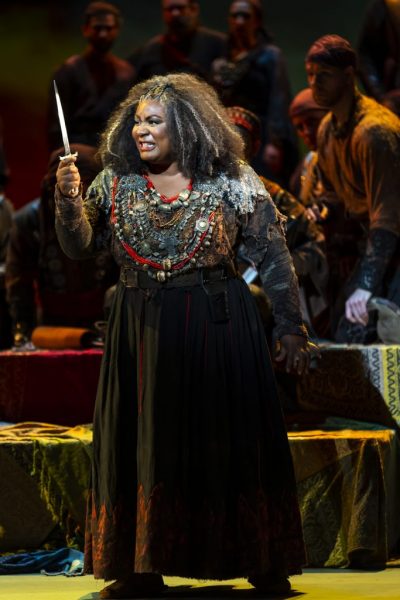 Some of the opera world’s most glorious voices are currently filling the Kennedy Center Opera House in  the Washington National Opera’s dazzling production of Verdi’s “Il trovatore” (The Troubadour”). Directed by Brenna Corner, with Conductor Michele Gamba at the helm of the Washington Opera Orchestra, the fantastical tale features a fearsome love triangle, mistaken identity, the burning of an innocent Gypsy at the stake, and her daughter’s unyielding drive for vengeance.

One of Verdi’s most beloved works, “Il trovatore” is an opera in four acts that opens with Ferrando’s (bass-baritone Ryan Speedo-Green) retelling of Count di Luna’s wrongful accusation against a gypsy who he believed had bewitched his youngest child in “Di due figli vivea padre beato” (The good Count of Luna lived happily, the father of two sons). The gypsy’s daughter, Azucenza (mezzo soprano Raehann Bryce-Davis) takes revenge on the Count by throwing his baby son into the burning flames, only to realize that in the confusion, she had mistakenly tossed her own son into the fire. Before Count di Luna dies, he tells his remaining son, (baritone Christopher Maltman) the new Count di Luna, to find Azucenza, believing his child might still be alive. In the midst of this high drama, a love triangle is brewing. Lady-in-waiting to the Princess, Leonora (soprano Latonia Moore), is madly in love with the Troubadour, Manrico (tenor Gwyn Hughes Jones), and he with her, but the Count is determined to have Leonora for himself. A narrative of twists and turns ensues until the final notes deliver an astonishing and staggering conclusion.

Fifteenth-century Spanish soldiers crowd the stage. Gypsies, nobility, and dashing troubadours appear in detailed, exquisite costumes by Martin Pakledinaz. With set design by Erhard Rom, the action moves from a castle to a convent (featuring an enormous crucifix), and finally a prison cell. Setting the tone throughout are projected images by designer S. Katy Tucker, including a haunting silhouette of Azucena’s mother burning to death while her rich mezzo-soprano gives the audience a stirring rendition of “Stride la vampa” (“The fire roars!”)

One of opera history’s most prolific composers, Verdi’s “Il trovatore” is a must-see for all opera enthusiasts, but also an accessible piece for those new to the art form. With this production, the Washington National Opera once again graces audiences with world-class vocal artistry and opera at its very best.

“Il trovatore (The Troubadour)” runs through November 7, 2022 in the Opera House at the John F. Kennedy Center for the Performing Arts, 2700 F Street NW, Washington, DC 20566. For more information or to purchase tickets, click here.