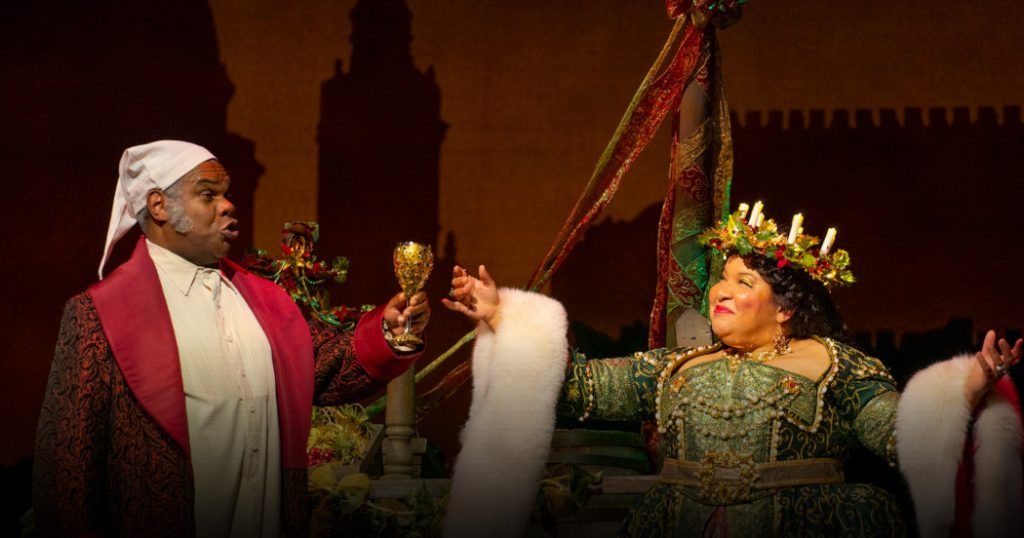 It can be said there is no new idea under the sun, and with an all-too-familiar play like “A Christmas Carol,” it is hard to imagine a production that separates itself easily from the other versions offered this season. The Ford’s Theatre production, however, breaks from the pack again with unrivaled production values and a pace that hardly gives the audience time to breathe.

The Ford’s Theatre production…breaks from the pack again with unrivaled production values and a pace that hardly gives the audience time to breathe.

The sense of 19th-century history at Ford’s Theatre is enhanced by Lee Savage’s steel and grit sets that soar to fill the 30-foot-high stage. The audience is taken back to London in the Industrial Age, with smutty, iron walkways and dingy-windowed factory buildings that serve as outdoor backdrops, as well as the interiors of Scrooge’s counting house and Fezziwig’s Christmas shindig. The jagged, chimney-lined evening skyline is ever-present as it hangs below a bright lunar timepiece that ticks off the hours of ghostly intervention.

The lighting design by Rui Rita adds to the dismal industrial feel, as well as sorts out the action on stage beautifully as one scene moves seamlessly to the next.

Director Jose Carrasquillo follows Michael Baron’s original stage direction for this production. He uses a chorus of beautifully-costumed child and adult carolers to fill any gaps in action on the stage, between scenes, or as sets are being moved about. The result is a merrier, less brooding production that leaves little room for reflection until the entire theater is lit with Christmas cheer at the end of the play.

Craig Wallace as Ebenezer Scrooge has a larger-than-life presence that fills the stage. His sonorous voice booms with disdain as he scares away children and puts adult supplicants in their place. He is rivaled only by Stephen F. Schmidt as Jacob Marley, who rattles and howls around the stage with a ponderous, clattering gait that shows the weight of his misdeeds.

Jonathan Atkinson, as a gentle and kind Bob Cratchit, seems to be less cowed than well-practiced in handling his irascible employer. The spirits, who play many parts, are memorable as they wink and cajole a debt-collecting Scrooge and lead him to his ultimate change of heart.

Every corner of this production is technically charged, with ghosts emerging from paintings or floating above the London skyline to fires and graves rising from the floor, and the clever technical twists are greatly appreciated by the audience. This production makes remorse and redemption almost fun.