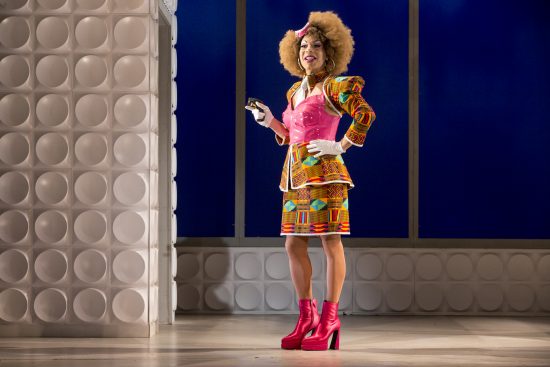 Bemoaning the fact that I haven’t been able to travel anywhere fun, I requested to cover the opening of a play at Baltimore’s renowned professional theatre, Baltimore Center Stage. Little did I know that I was about to be transported – no transformed – on one of the most wonderful stage journeys I’ve been on in ages. “Ain’t No Mo’” is a rollicking, rolling, occasionally bumpy but always entertaining ride from the mind of a brilliant playwright.

It’s a deceptively fantastical concept at play here—African Americans are given the federally-mandated option of leaving America to be repatriated back to Africa—reminiscent of the Liberian experiences of the 1800s. In a series of unrelated vignettes, award-winning playwright, Jordan E. Cooper, crafts a crazy quilt of Black experiences both terrifyingly symbolic and hilariously realistic.

‘Ain’t No Mo’ is a rollicking, rolling, occasionally bumpy, but always entertaining ride from the mind of a brilliant playwright.

Director Lili-Anne Brown’s attentive, skillful direction is evident in the rapid fire pacing of each segment of the approximately 90-minute (no intermission) presentation. Actors are given free-reign to invent and construct their characters. You can’t teach that kind of theatrical freedom, but a good director helps shape and direct the process that leads to these sometimes over-the-top depictions. Hats off to Ms. Brown!

The show opens with our guide for the evening, Peaches, a combination emcee, tour guide, and airline flight agent for African American Airlines Flight 1619. If you’ve been to a drag show lately, you know this character. She’s the loud, proud, take-no-prisoners, do NOT cross her or get on her nerves because she WILL call you out, type. Foul-mouth and bold as brass, in the hands of Jon Hudson Odom, Peaches is hell on heels and absolutely fabulous. In the script’s less than satisfactory ending (for me), her melt-down is a tour-de-force.

The real action gets started with a funeral in typical Black church fashion, with all the requisite characters on hand. The five-member ensemble, led by the solidly entertaining Breon Arzell as the Reverend, is burying Mr. Right-To-Complain on the night of the election of Barrack Obama. He shouts and struts his jerry-curled persona as the quintessential Black preacher. He is also terrific in a later scene as the snarky talk show host in a parody of the “Housewives” reality series, “The Real Baby Mamas of the South Side.” He can snap a fan with the best of them. Arzell is an exceptionally versatile character actor, as evidenced by his ability to show his thug side as a ghost arguing with his pregnant wife at an abortion clinic and with equal aplomb as an uptight bougie in a sketch about a family’s “blackness locked in the cellar.”

The cast all portray multiple characters, and I was constantly impressed with their adroit physicality. I was exhausted just watching their extreme gyrations in some scenes. I would love to wax endlessly about each of the women in the ensemble but will hit some highlights.

I loved LaNisa Renee Frederick’s character in a scene about prisoners being released from jail to join the flight to Africa. She was able to go from 0 to an emotional 120, from a seething simmer to a heartbreaking boil in the span of 60 seconds. Truly impressive.

Brandi Porter, Shannon Dorsey, and Shayna Small were each wonderful in their versatility and ability to totally transform themselves from one scene to the next. With the quick changes and a series of wigs, I was occasionally hard pressed to figure out who was who. Shannon Dorsey and Brandi Porter both took turns making me hold my sides with laughter and dry my tears with their heart wrenching performances. Shayna Small’s small, Mona Lisa smile was the perfect denouement to her scene in the “Baby Mama” reality show sketch.

“Ain’t No Mo'” represents a shift in playwrighting that is both welcome and hopefully portends of more to come from a new crop of talented writers. This play’s concept and execution remind me of another recent work, that one by Robert O’Hara titled “Mankind,” which also offered an alternate reality based on current and past events told from an entirely new perspective. Cooper’s script is a scathingly raw, brutal telling of the Black experience from his perspective. While I was uncomfortable with the relentless use of the “N”word, in this context, it is necessary and integral to the telling of these stories. It was supposed to make folks uncomfortable. These words carry a lot of power and these powerful stories and vivid characters showcase the range of emotions inherent in the daily lives of Black Americans. The themes may stray into the absurd, but the grounding in reality is always evident.