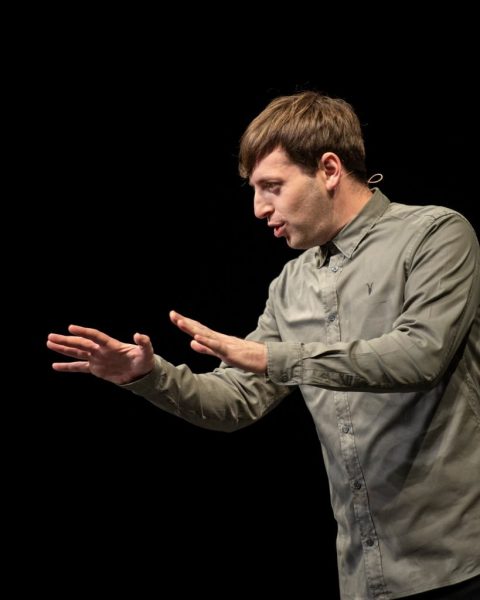 Alex Edelman in “Just For Us” at Woolly Mammoth. Photo by Teresa Castracane.

“Just For Us” is an award-winning, one-man show starring the incomparable Alex Edelman at Woolly Mammoth Theatre Company.  He keeps the audience laughing from the moment he appears onstage until the astonishingly satisfying final line. In a production that lasts a little more than an hour, Edelman interweaves humorous anecdotes about growing up Orthodox Jewish in Boston with an evening spent at a White nationalists’ meeting.

You read that right. After suffering extensive amounts of antisemitic abuse online, Edelman decides to attend an open meeting of White nationalists, only realizing when he arrives that the gathering is not being held in a public place, but in the living room of a White nationalist’s apartment in Queens.  Undaunted, he heads into the meeting and chats with other attendees—his keen talent for discovering humor in even the most unlikely places provides side-splitting laughter and an introduction to some unique characters.

The set consists of three bar stools on an empty stage, but somehow, the stage seems abuzz with the personalities of Edelman’s family, friends, and adversaries who are so crisply drawn by the comedian that you leave feeling as if you had actually met them. Laugh-out-loud moments include Edelman’s vignettes about his brother’s success at the Olympics; his father’s conversation with the Rabbi at his Yeshiva; and his mother’s compassion for a friend that leads to her sons’ first celebration of Christmas—complete with a tree, Santa Claus, and a viewing of “A Charlie Brown Christmas” special.

Edelman will make you laugh—a lot—but he’ll also make you think. What drives hate? Why are some people compelled to demonize minorities? And wouldn’t we all be better off if we could see the humor in this life and laugh at it all together?

Running Time: Approximately one hour and 15 minutes with no intermission.

“Just For Us” runs through December 23, 2022 at Woolly Mammoth, 641 D Street NW, Washington, D.C. 20004. Box Office: Wednesday–Friday: 12–6pm, 202-393-3939 or email tickets@woollymammoth.net You can also purchase tickets online. All audience and staff members are required to wear a mask inside the building when not actively eating or drinking.