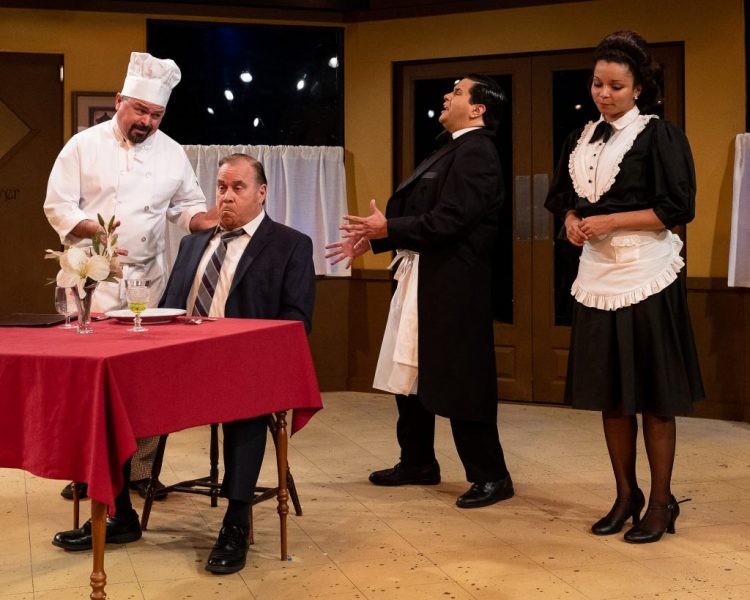 Silver Spring Stage is currently presenting a delightful, absurdist gem, “An Empty Plate in the Café du Grand Boeuf,” written by Michael Hollinger and directed by Karen Fleming. Featuring a small cast of sharply on point performers, this melancholy, dark comedy kept me riveted through its adept twists and turns.

The intricately nuanced dialogue sparkled, be it with humor, irony, or Hemingway quotes.

Monsieur Victor, played with dignified aplomb by Brian Lyons-Burke, is the owner and sole patron of the Café du Grand Boeuf, whose small staff exist solely to cater to his every whim. They do balk when his whim is to starve himself to death in the café in front of empty plates. As the staff frantically tries to talk their dear Monsieur down from the ledge, he begins to divulge the story of his past and present, all scribed by the earnestly eager, new waiter-in-training, Antoine (Fletcher Lowe) to great comedic effect.

Along the way, we learn of the disintegrating marriage between the sometimes chilly, and always overly formal chief waiter, Claude (Alex Diaz-Ferguson) and his waitress wife, the warm-hearted Mimi (Stephanie Yee), with chef Gaston (Brendan Murray) frequently popping in from the kitchen to add his hilariously pragmatic (and sometimes quite graphic!) advice and counsel to all present. Before the evening draws to a close, the elusive Mademoiselle Berger (Jenny Gleason) makes an appearance and provides bittersweet resolution to Monsieur Victor’s angst—but is all truly resolved? You’ll have to attend the play to find out.

“An Empty Plate in the Café du Grand Boeuf” is a play that could go so very, very wrong with an unskilled cast, so what a treat it was that this stellar cast was deftly able to hit the timing and beats just so. The intricately nuanced dialogue sparkled, be it with humor, irony, or Hemingway quotes. You are swept from maudlin moods to giggles and from empathy to disgust with brilliant ease by the talented cast who understood the importance and meaning of every moment in this ever-shifting tale.

Viewers be warned that this play is quite graphic in language at times and contains some potentially disturbing themes, so be sure to read the Advisory at the end of the review to evaluate if you can stomach (pun intended) the dish that Silver Spring Stage serves up. If “An Empty Plate in the Café du Grand Boeuf” suits your particular appetite, you won’t be disappointed, but don’t set yourself up to be disappointed if the subject matter is not for you.

The simple stage set by designer Bill Dunbar perfectly drew the audience into a Parisian café. I appreciated the detail of the pots and pans hanging behind the kitchen door, tantalizingly visible when characters exited the stage. The red tablecloth is a beautiful bit of foreshadowing and ended up playing its own role in the story. The costumes designed by Stephanie Yee were equally effective, adding to the ambiance of a traditional French restaurant in the 1960s.

Despite the brief moments of physical affection depicted in the play, Silver Spring Stage wisely made use of Intimacy Choreographer Helen Aberger following the growing, much-needed trend of productions safely ensuring the consent and comfort of actors who depict on stage intimacy. Bravo to Silver Spring Stage for taking that extra step to protect their actors. The short scene managed to be quite poignant as well and was one of the play’s most powerful moments, which is even more reason to utilize an Intimacy Choreographer. Here’s hoping that more productions follow the lead of Silver Spring Stage.

Overall, “An Empty Plate in the Café du Grand Boeuf” is a highly entertaining, witty, and sometimes bittersweet tale that will leave a delectable aftertaste to those who possess the particular palette necessary to enjoy this type of maudlin, and somewhat graphic, comedy. If that’s you, then I highly recommend that you don’t miss this unusual production at Silver Spring Stage.

Advisory: Mature sexual themes, as well as graphic descriptions of human anatomy and animal abuse; a prevalent focus on the themes of death and suicide; an onstage gun (pointed at a cast member); and several in-character moments of stammering and racism. Recommended for ages 18+.

“An Empty Plate in the Café du Grand Boeuf” runs through November 20, 2022 at Silver Spring Stage, 10145 Colesville Road, Silver Spring, MD 20901. For more information and tickets, go online. COVID-19 Safety: Requires all audience members and all non-performing volunteers to wear masks. Due to unforeseen but necessary repairs to the Woodmore Shopping Center and the SSS facility, the construction will  affect the use of the lobby bathroom. As long as the outside front sidewalk is closed, patrons will need to enter through the rear entrance and there will be no elevator access.