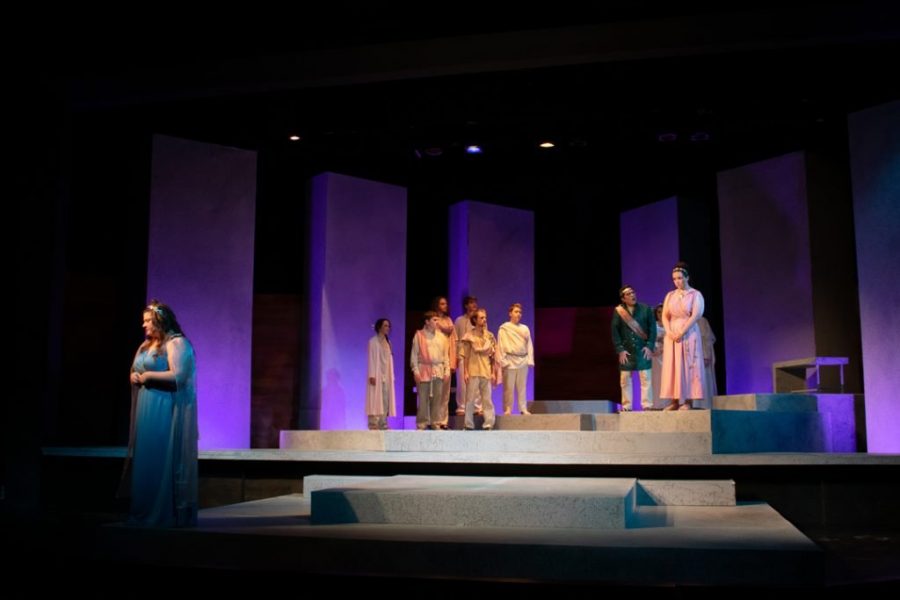 A new translation of “Antigone” is currently being presented at Anne Arundel Community College. Originally written by Sophocles in 441 B.C., it warns of the dangers of tyranny and, amazingly, this 2400-year-old play is still relevant today. The production is an academic exercise in AACC’s theatre program, but this new and moving translation by Erin Bone Steele delivers a modern take on the abuse of power that merits viewing.

…this new and moving translation by Erin Bone Steele delivers a modern take on the abuse of power that merits viewing.

The crisis that sets this drama into motion has already happened. The Chorus, which is omnipresent throughout the play, initially describes a bloody battle between the usurping ruler of Thebes, Eteocles, and his ousted brother Polynices, who is trying to take his rightful position as King. The Chorus describes how both brothers are killed in the battle as they move around the set, which gives the feel of a well-lit outdoor amphitheater.

Kreon (Nathan Garcia) ascends to the throne after the death of the brothers. He matter-of-factly sees the resolution to this family drama as a simple matter: he decrees that Polynices, as the attacker of Thebes, must be treated as a traitor and left to rot outside the city walls where he fell. He is not allowed proper burial or funeral rites. Done—nothing to see here, let’s move on, or so he thinks.

The drama escalates when Antigone (Amanda Matousek) finds moral peril and cruelty in denying burial rites to her beloved brother. She is a powerful force on stage, certain, self-righteous and unflinching in her decisions. After failing to persuade her frightened sister Ismene (Katie Renee Laubert) to help, she brazenly decides to defy the King’s decree and administer the rites to her brother that will allow him to properly enter the underworld.

Antigone knows the repercussion of her actions will be death, but sees the moral imperative of divine law to be more important than human law. When a furious Kreon finds out what she has done, Antigone is sentenced to be buried alive in a cave without food or water.

The Chorus is initially unsure whether or not to support Antigone in her rebellion. Used to give insight to the audience and help them interpret the drama, the Chorus slowly comes around to see the injustice in the treatment of the righteous Antigone. They are deftly moved around the stage to emphasize that more and more of the populace see the King as wrong. The Chorus implores Kreon to seek wise counsel and listen to it, and an elder appears to show Kreon the err of his ways. Eventually Kreon realizes that the city is against him, but it is too late. Disaster, or Fate, awaits him.

Erin Bone Steele wrote this new translation and also directed the production, which is simple, concise, and modern. Her direction leaves no wasted time or space on stage, and the burial scene of Kreon’s family is ethereal and touching.

The scenic and lighting designer, Sean Urbantke, lights the monochrome sets to amplify mood and change from morning to night so effectively that it is hard to tell whether or not the actors have changed costumes, or if they are just bathed in a new gel. The angular, irregular tiers of the set are sometimes lit like a crayon box, and help rearrange the actors so their grouping is never the same twice.

Many of the actors move in and out of the Chorus to play other parts. The transitions are seamless and effective as the play builds to its conclusion, which leaves no doubt as to who can ultimately effect change—the Chorus, otherwise known as the people.