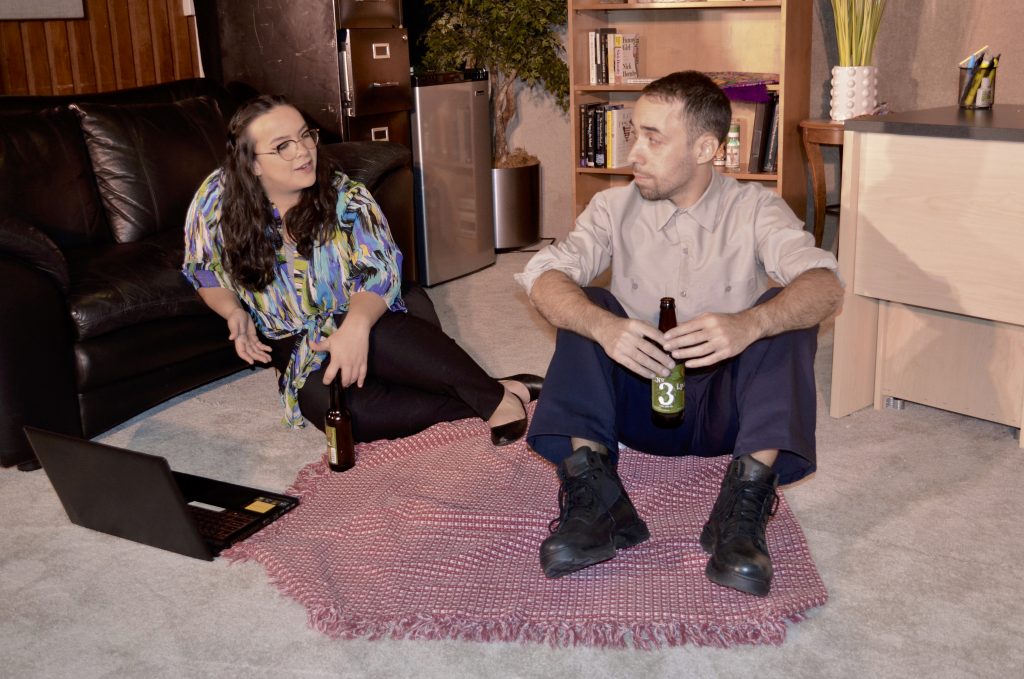 What does assimilation into U.S. culture mean for immigrants from different Latin American countries and economic classes? The points made in “Fade” by Tanya Saracho may break no new ground but they are still compelling. The DC-area premiere at Unexpected Stage Company, directed by Dylan Arredondo, is engaging and thought-provoking. Published in 2017, “Fade” tells the story of Lucia (Camila Calderón) a young Mexican-born writer who gets her first TV scriptwriting job on a set dominated by white males. Lucia quickly befriends another Mexican American at work—Abel, the janitor (Michael Burgos). “We’re in this together,” Lucia happily declares to Abel. He replies sarcastically, “We’re in what together?” The class differences between Lucia and Abel are obvious and create the framework for a familiar story: opposites-attract, slow character reveals, developing trust and respect, followed by crushing betrayal. Lucia’s job writing stories for an American-produced, telenovela-style TV show is an apt metaphor for the emotional arc of the play. What makes this production relevant and worth seeing are its tight direction and powerful performances.

Lucia is a fresa at heart—slang for a snobby person. When her boss asks her to translate so he can communicate his petty demands to his housekeeper, Lucia expresses her frustration to Abel by claiming the boss sees her and the housekeeper as “the same.” Abel replies, “Why is that so bad?” Later, Abel is frustrated that Lucia cannot remember he is a veteran of the Marines, not the Army, even though he has told her several times. She is self-centered and becomes more so as she increasingly focuses on her career. It is to Calderón’s credit that her character remains likable even when the fresa appears. Abel has a child and a past trauma he deals with by playing by the rules and having low expectations—these are the options for a poor immigrant from Mexico. In contrast, the comparatively wealthy, educated Lucia can set her sights on becoming her boss.

What makes this production relevant and worth seeing are its tight direction and powerful performances.

The performing space at Unexpected Stage Company is about the same size as the 30-seat house, making for an intimate, theatrical experience. Any movement or facial expression reads large and the director has been wise to keep the action small, heightening its believability. On a large stage, the intensity of Lucia’s emotional character development would be well within bounds but here it risks blowing the lid off realism. In Burgos’s highly controlled performance, you eagerly watch every tiny move and listen closely to every inflection, wanting to know more about his character. At one point Abel enters alone and carefully vacuums the entire space. His concentration was so strong, that the routine action was riveting. Burgos’s Abel is completely believable in every moment.

As Lucia climbs the career ladder at the TV studio, she loses her fun glasses and her brightly colored clothes fade to beige and black in Sharlene Michelle Clinton’s complimentary costumes. At the very end she ditches her flats for the ultimate don’t-mess-with-me, black high heels.

The playing space allows little flexibility but set designer Simonee Schneeberg has included all that is necessary to depict the drab office of a low-level staffer. The hanging window that Abel must regularly clean is a nice touch. Set changes are efficient and fun to watch and accompanied by mood-appropriate music. Jozef Orsich’s lighting design makes the most of the small space.