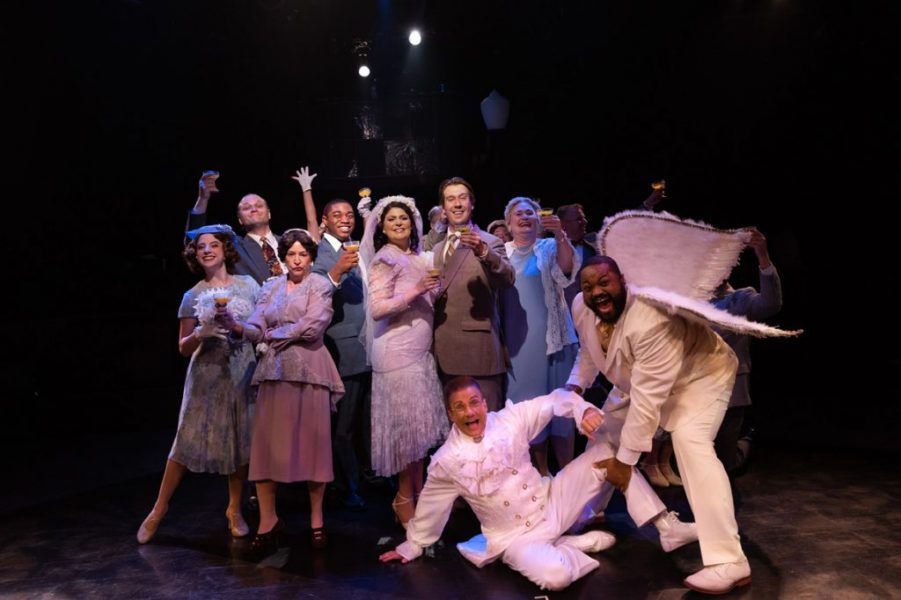 Frank Capra’s 1946 movie “It’s a Wonderful Life” has become one of the most beloved films ever produced in Hollywood. In the movie, a good-hearted but frustrated everyman, George Bailey, is suddenly faced with the prospect of financial ruin. Driven to despair, George stands on a bridge, contemplating ending his life and praying for divine help. This help arrives, albeit in unexpected form—a bumbling angel, named Clarence. He shows George what life in his town would have been like had he never been born, causing George to see not only his value to others, but also to fully appreciate his own life.

This holiday season, Toby’s Dinner Theatre presents us with its own gift to our region—“It’s a Wonderful Life: The Musical.” Based on the film, this version was written in the late 1980s. Toby’s founder and director, Toby Orenstein asked Michael Tilford and David Nehls, who were also Toby’s cast members at the time. Aside from a national tour undertaken in the mid-1990s, this particular show is unique to Toby’s and has not been licensed. Show producer and casting director, Mark Minnick, simply says, “It’s her heart.”

The show has a lot of heart! First and foremost are angels, Joseph and Clarence, played by DeCarlo Raspberry and David James. As the senior angel, Raspberry acts as narrator and moral anchor for the show, embodying both wisdom and patience. David James is the scene-stealing Clarence whose mix of naiveté, flamboyance, and comic timing wonderfully counterbalance the serious moments taking place on stage.

Justin Calhoun and Marykate Brouillet portray George and Mary Bailey. Calhoun is an energetic George, showing both his good character and also his impetuous side. He also sings beautifully, especially “I’m On My Way” and his moving “Lullaby.” Brouillet is also excellent in both her solos and a surprising duet with Clarence/David James, “If Only I Could Reach Him.”

Robert Biedermann is delightfully horrid as the evil Mr. Potter. His signature song, “It’s Time To Get Back Down To Business,” sung with a group of fellow bankers, is terrific. In addition, both this reviewer and his 13-year-old daughter were highly impressed by the younger members of the cast who play the young George Bailey and his future wife Mary and, later, George and Mary’s children: Lucas Rahaim (young George/Pete), Jana Sharbaugh (young Mary/Janey), and Gwyneth Porter (Zuzu). (This cast of young performers may vary from performance to performance.)

While the show is very faithful to the movie—indeed, producer Mark Minnick informs us that Toby consulted Frank Capra’s daughters during the writing of the script—there are some modifications from the original. As already mentioned, the musical expands the role of the angels. We also learn a bit more about George Bailey. While the movie only hints at his frustrations with his life of self-sacrifice, the musical shows this more clearly. This choice actually improves the musical in that it shows more clearly that, while George is facing a very real problem with his faltering savings and loan and the delightfully evil Mr. Potter, there is a second issue as well. George has spent most of his adult life holding others—even family—at arm’s length as he frets about his personal sacrifices and lost dreams. Here, both problems are recognized and resolved, with humans fixing the first and angels the second.

The sound design of the production is generally excellent. This reviewer could hear every word clearly. Music is provided by a live six-piece orchestra, conducted on this particular night by Reenie Codelka. The music itself is varied in style. There are occasional nods to music of the eras being portrayed, such as the energetic “Syncopation Rag,” set in 1928 and sung by Violet (the memorable Santina Maiolatesi) and town folk, and 1940s nightclub music in the Potterville bar scene but much of the music has a more contemporary Broadway feel. The musical choices seem to have been made with the ideal of illustrating the timelessness of the story as opposed to fixing it to a particular point in history. This is especially true for the brief but moving “Vespers for the Common Man,” which suggests both the holiday season and prayerfulness.

Sets and props are simple but effective. Particularly noteworthy are the simple “special effects,” such as when an angel stops time with the snap of his fingers. The actors’ skill, combined with effective lighting, renders these low-tech effects surprisingly believable.

“It’s a Wonderful Life: The Musical” features charismatic performances and excellent singing, enthusiastically appreciated by the audience. The show is a wonderful way to welcome the holidays with a classic story while also experiencing it a new way. It reminds us that we not only have to beware the Mr. Potters of the world, but watch out for our own expectations!

Advisories: Occasional strong language and discussion of serious themes. Artificial mist and mild stroboscopic lighting effects are used at times during the show.