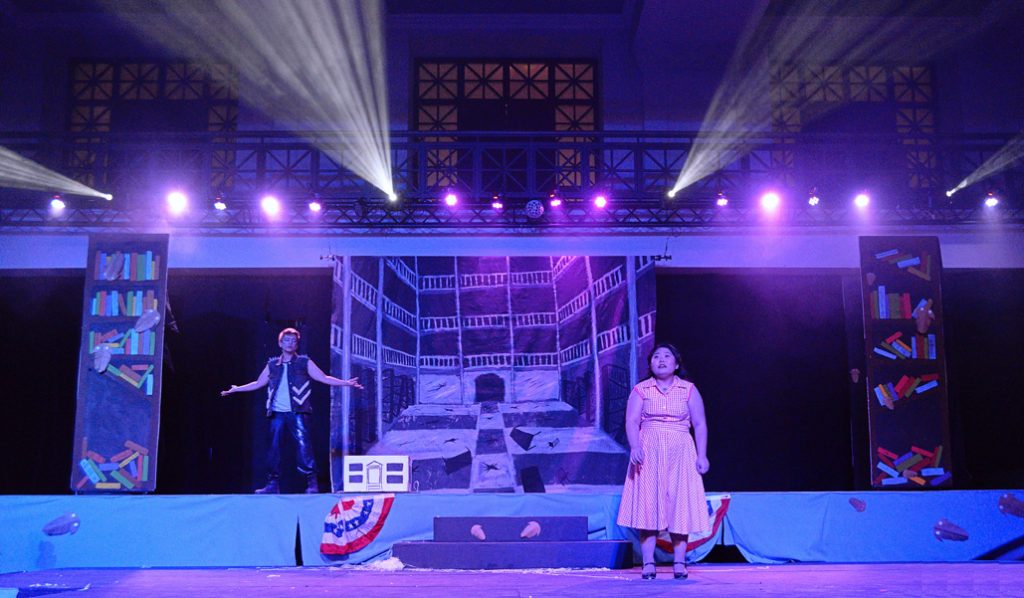 In the fifteen years since its founding, the Baltimore Rock Opera Society has been responsible for some incredibly ambitious productions of original material. The latest of these is “Love & ROAR!,” appearing through November 19 in a vacant downtown space. This former bank building is a great temporary home, with one or two limitations, and BROS makes inspired use of it.

‘Love & ROAR!’ is a wonderful new musical that ROCKS.

Chris Reuther originated the concept of the piece three years ago. Imagine a 1950s Godzilla B-movie, that’s also a romantic comedy, told from the point of view of the monsters. Then, make it a rock musical. Finally, throw the kitchen sink into costumes, puppets, lights, sounds, and glitter. Take all of that, hire a great band, a huge cast, and a dozen puppeteers and stage hands, and you might be close to an idea of what the BROS have accomplished.

Music is by John Alexander Roman. Lyrics are by Roman, Eileen Heady, and Jared Boze. The book is by Heady and Boze. This team has crafted a story that is equally epic and relatable. In it, we meet Dr. Mary Eckhart (Marela Kay Minosa), a scientist. The setting is Bay City, Florida, in 1959. Mary is breaking up with her boyfriend, Captain Cliff Roberts (Maxim Sobchenko), citing a desire for more than the suburban white picket fence kind of life for herself. Mary looks to friends on her research team (Annie Bobbitt, Aby Warran, and Mars Duque) for consolation, but they’re immediately distracted by other troubling events. A recent accident at the nuclear power plant and the opening of a giant fault line under the city have resulted in the emergence of six giant monsters—the “Ancient Ones”—who are terrorizing Bay City in predictably destructive ways. What’s less predictable is the monsters’ motive: the Ancient Ones are looking for love! Stomping on buildings and creating mass hysteria are simply foreplay to them. Baliog (Rob Bradley) is the monsters’ alpha, with four capable followers (Sarah Maerten, Lindsey Landolfi, Tatiana Nya Ford, and Sam Brunner), and one sad-sack misfit monster named Kentaro (Mel Tillery). Kentaro is at serious risk of failure to find a mate, which would result in their banishment. As Baliog explains, “Nobody meets organically anymore. It’s too much work.” Sulking alone while half-heartedly laying waste to the Bay City Library, Kentaro meets Mary, who’s researching for a solution to the monster problem. She finds a magical book, which releases a genie of sorts, The Common Ancestor (Tevis Tsai). As a result of this encounter, Mary is granted with monster powers, including the ability to communicate with the Ancient Ones, and is even capable of transforming into one of them herself. With these new skills, Mary reaches détente with Kentaro, and a bargain is made: dating advice in exchange for access to the Ancient Ones to further Mary’s study of them.

When military man Cliff gets wind of Mary’s activity, he takes her to see the Mayor (Jason Aoraha) and Comptroller (Lydia Ma). Mary struggles to sell a “they come in peace” pitch, but manages to buy a little time before all-out war is to be waged. Unfortunately, Mary’s continuing research is secretly used to build TAD, a giant robot monster-killer, setting in motion a series of betrayals worthy of a film noir plot. There’s a massive fight scene, featuring a tag-team of Kentaro and Colossa (Mary’s monster alter ego, played by Gabe Duque) versus Baliog and the gang. TAD is eventually deployed, in a double-cross that threatens all of humanity. Finally, the Common Ancestor offers Mary a very enticing deal, in what should be the perfect epilogue.

Director Kateri Pelton has her hands full with this piece, and is very much up to the task. Her staging choices had to deal with challenges involving enormous differences in scale between the human characters and the Ancient Ones. She tackled these in some very simple and clever ways. Having a great cast helps. Minosa and Tillery are the stars, enjoying fantastic chemistry in their characters’ friendship. Each is a gifted performer. Tillery is brilliant in their brooding “No Match for Me,” and Minosa is ablaze in “The Monster Inside.” The backing band for the show consists mostly of local group Thrillkiller, whose lead singer is Rob Bradley, playing the evil Baliog. Bradley is a natural rocker with amazing pipes, shown best in “Crushing It” and “When You’re the Hero,” a duet shared with Sobchenko. Steve Pingel is a journalist, weaving a doomsday thread through the story, along with an uncredited Chuck Green as the President, whose smiling “It was nice knowing ya” tells us that the end is nigh.

Production design involves too many elements and artists to list them all. Special mention is definitely owed to the model and puppet setup, with creatures designed by a team led by Reuther. These figures perform in unison with the actors, and their rampages are projected in delightfully out-of-sync black and white video. Greg Bowen and Chris Uehlinger create this effect, with plenty more live imagery sprinkled throughout the show during scene changes. Mace Mehring’s costumes are amazing, and worth the price of admission by themselves. Fight Director Lucas Gerace provides a heightened, stylized, slow-mo kind of feeling to the monster battles. Chris Allen’s lighting and Justin McAllister’s sound are lovely, and props by Juan Lucas are impressive. An exaggerated tip of one’s cap to Justin Sabe, Kim Le, Liz Richardson, and their teams, for wrangling such an enormous effort by so many artists.

“Love & ROAR!” is quite long, but worth the time. Although it feels as if 30 minutes could easily be trimmed from the second act, this is a very highly polished work in progress, which will doubtless improve throughout its brief run. For those who may be wary of the prospects of spending three hours in a hard plastic folding chair, the BROS are offering a live stream of the performance on November 18. This is also a great option for those who prefer not to climb two flights of stairs to reach a rest room. Aside from those quibbles with the venue, “Love & ROAR!” is a wonderful new musical that ROCKS.

Advisory: Use of haze.

“Love & ROAR!” runs through November 19th, 2022 at 1 East Baltimore Steet, Baltimore, MD 21201. Tickets are available online. Patrons are required to provide proof of vaccination, and to wear masks when not eating or drinking.