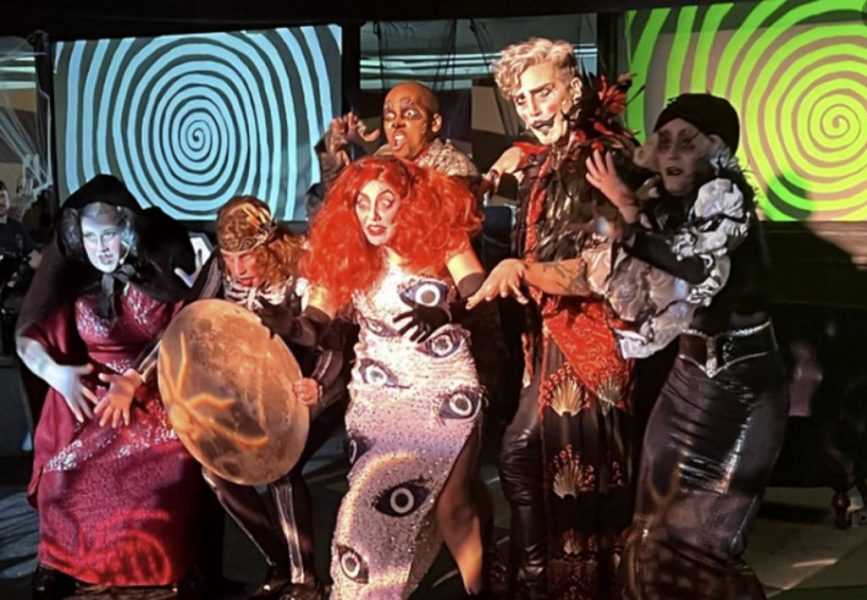 For some of us, October is too short. Come Thanksgiving, we still crave the creepy and desire the demonic. Luckily, Stillpointe Theatre is serving up a frightening feast with all of the ghastly trimmings. This ghoulish, pun-filled “macabre cabaret” by Scott Keys and Rob Hartmann will satisfy the darkest of longings, all the way ’til Krampusnacht.

It has a seriously stylish design, and it’s performed with abandon. “Macabaret” is spooky, sexy, and fun!

One glance at the program is enough to answer any questions one might have about the world of this musical revue. With character names like “Phil Graves,” “Maude Lynn,” and “Paul Bearer,” this show has deathly gags galore. Keys and Hartmann have written some great songs, and the book and lyrics waste little time on plot. Instead, the audience is treated to numbers like “Marriage is Murder” and “Boogie Woogie Boogeyman,” performed with scary verve by a very strong cast. Directing is Amanda J. Rife, who keeps the energy and pace way, way up throughout. Costumes (by Kitt Crescenzo), projections (by Johnny Rogers), and wigs and makeup (by Danielle Robinette) are through-the-roof dazzling. The live onstage band, led by “Miss Skeleton Keys” (and Music Director) Stacey Antoine, is tight and connected.

Joseph Mulhollen, as “Phil Graves,” opens the evening by introducing the other characters. “Victoria Bledsoe” (Meghan Taylor) then jumps right into one of the show’s best numbers, “I’m Possessed.” In it, we also meet a sort of devil-on-their-shoulder who’s responsible for lots of Tourettes-ish hilarity. They then duet with “Paul Bearer” (Derek Cooper) on “Marriage is Murder,” a very literal predecessor to “R.I.P.,” a song in which the new widower litters the room with acrimonious acronyms and dances with his late wife á la “Weekend at Bernie’s.” Mulhollen next leads the full cast on “Murder of Crows,” then shares a duet on “Oh Edward, What Kind of Vampire is That?” with Valerie Holt (“Maude Lynn”). The “Edward” of the song is Edward Cullen, of “Twilight” fame. Holt stays on with the torchy “Blood Type,” and Mulhollen returns for “Scatter My Ashes.” “Going Green” is next, a fantastic duet by “The Showghoul” (Rachel Blank) and “Donna Shroud” (Jayné Harris), in which death and concern for the environment are tidily combined. Mulhollen returns with “Doctor Jekyll and Sister Hyde” before Cooper delivers a spooky story about werewolves, complete with a flashlight under his chin.

“In fashion, you’re either in our you’re out. Or, you’re dead,” declares Blank, leading into “Skin and Bones.” Another of the evenings best numbers, “Dead End Job,” follows, with Cooper and Mulhollen reprising “The Graves Brothers” (Phil and “Doug,” get it?) old vaudeville act. The song includes breaks for jokes that are oh, so bad, and oh, so perfect. Next, it’s an Andrews Sisters act of Taylor, Harris, and Holt on “Boogie Woogie Boogeyman,” and a solo Harris channeling Peggy Lee sultriness on “Ghost of a Chance.” Blank absolutely stops the show on “Grave Mistake,” a song whose lyrics are built around some clever rhymes, like “someone should’ve hit me with a shovel, when I said our love’ll never die.”

The Stillpointe folks have mounted a gorgeous revue here, one of the last productions they’ll mount in the space they’ve occupied since 2019. Landlord troubles seem to be the norm nowadays in that stretch of North Avenue, unfortunately, leaving some companies looking for options next year. But there’s still a chance to see phenomenal work on Stillpointe’s quirky little stage. It has a seriously stylish design, and it’s performed with abandon. “Macabaret” is spooky, sexy, and fun!

“Macabaret” runs through December 10, 2022 at 1915 Maryland Avenue, in Baltimore. Tickets are available online. There are no performances Thanksgiving weekend. Masks are encouraged but not required. Proof of vaccination is not required.