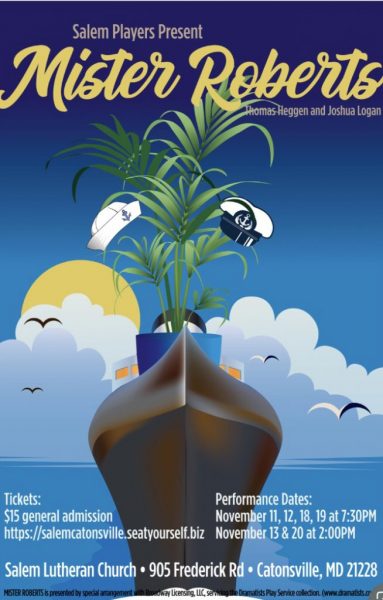 “Mister Roberts,” the Pulitzer Prize-winning play written by Thomas Heggen and Joshua Logan (and adapted from Heggen’s book) is currently playing at Salem Players. It is produced by Anita Lane and directed by Tim Van Sant. According to Van Sant, he was skeptical about launching a production of “Mr. Roberts” despite its award-winning history. “Mr. Roberts,” which opened in 1948, won the first Pulitzer Prize ever awarded to a play. It also won five Tony Awards including Best Play and Best Performance by a Leading Actor in a Play (Henry Fonda). The play went on to be a very successful movie in 1955 with Fonda reprising the title role and an all-star cast which included James Cagney as Captain Morton, William Powell as Doc and a very young Jack Lemmon as Ensign Pulver. Lemmon won an Academy Award for this supporting role. It is slightly dated and, in some ways, more reflective of theater after WWII than life on a navy ship. First instance, sailors do not use profanity.

Salem Players does an admirable job bringing us a look into our past. Don’t let the ship sail without seeing ‘Mr. Roberts.’

There are many fine new plays out there so the question becomes should modern theatre companies perform older period-plays? “Mr. Roberts” may not have the gravitas of “A Long Day’s Journey into Night” or “A Death of a Salesman” but we also need to revisit great plays from other eras. “Mr. Roberts” was meant to be seen live on stage and Salem Players gives us a chance to view this snapshot of another time—post-World War II. The play was probably ahead of its time by having a serious drama filled with comedy. It also deals with topics that have fallen by the wayside with the passing of the “Greatest Generation.” The play applauds heroism, loyalty, and compassion. The antagonist is The Captain (Toby Hessenauer) and his conflict with Lt. (j.g.) Roberts (Stephen Deininger). The real villain is the war itself which looms in the background until the final scenes when it takes center stage.

Mr. Roberts is a demanding role and Deininger brings this character to life. He captures this heroic, bright, and compassionate man. His scenes with Ensign Pulver are full of great comedic lines while his scenes with his crew, show his wisdom and kindness.

Hessenauer keeps The Captain from being a stereotype. He is a self-absorbed and ambitious man, but many of us probably have worked for someone like that in our lives. His scene with Roberts—as they wrangle over Roberts’ requests to be transferred to a combat area and the crew’s chance for shore leave after months at sea—are bristling.

John Dignam who plays Doc also helps with the comedy. He performs the character’s most memorable scene, making Scotch from almost nothing, with aplomb.

Connor Hurley plays the young and lascivious Ensign Pulver. Hurley, a recent college graduate in Drama from Catholic University, gets everything right. He allows the character to develop through the course of the play so that at the end, we believe his actions.

Much of the success of this production is the fine casting of the ship’s crew which includes Orbie Shively as Chief Johnson, Tim Toscano as Dowdy, Eric Boelsche as Insignia, Jack Nelson as Mannion, Nick Mason as Lindstrom, Dave Hill as Stefanowski, Stuart Deininger as Wiley, Jen Sizer as Dolan, and Robert E. Dunham IV as Gerhart. It is this group that fills out the comedy and the drama.

Katie Shelton gives a notable performance as Lt. Ann Girard and is also the assistant director. Shelton also appears later as Shore Patrolman, along with John Shelton and Ray Giuliani as the Military Police, and Carolyn Lawrence as Shore Patrol Officer. They all do a fine job. Unseen are Tom Dewberry who makes the shipboard announcements and Chris Newman as the BBC announcer.

Van Sant’s direction keeps the plot moving and allows his actors to bring insight to their characters.  I really think his decision to show The Captain alone in his quarters, when the others were all interacting and forming relationships on deck, is a brilliant idea as it allows us understand this harsh man a little better.

Matt Medicus’ set is very austere. There is a large multi-purpose black platform in the center of the main stage with a navy-type railing in the rear. Off to one side is a separate platform for the quarters of Roberts and Pulver with a small table and chair, bunk beds, and a large trunk. On the other side of the stage is another small extension of The Captain’s quarters with just a desk and two chairs and is quite effective. Paul Timmel expertly uses the limited lighting and Amanda Yerkey’s Sound Design is flawless.  The costumes by Lisa Yerkey, Janet Van Sant, and Fran Huber were mainly naval uniforms from WWII, and feel authentic to the era.

Salem Players does a admirable job bringing us a look into our past. Don’t let the ship sail without seeing “Mr. Roberts.”

Running Time: Two hours and 20 minutes with an Intermission.

Advisory: Very brief sexual conversations but, by today’s standards, they are G-rated.

“Mr. Roberts” runs through November 20, 2022 at Salem Players, Salem Lutheran Church, 905 Frederick Road, Catonsville, MD 21228. Go to this link to purchase tickets in advance. There are no Covid restrictions.