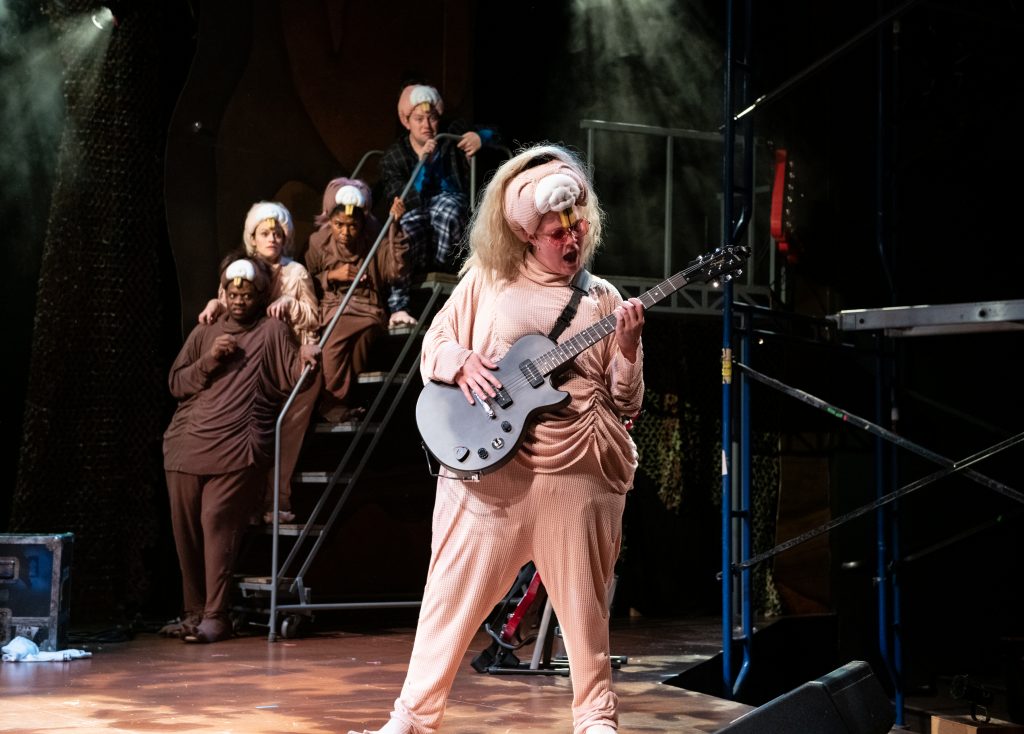 To dress or not to dress is the question in this rock musical with (L-R) Steven Gondré-Lewis, Katherine Zoerb, Alana Thomas, Harrison Smith, and Caroline Dubberly in Naked Mole Rat Gets Dressed: The Rock Experience. The musical, for ages 4-10, runs at Imagination Stage through January 8. Photo by  Margot Schulman.

Are you ready to ROCK? Imagination Stage certainly is with their enthusiastic, new production of “Naked Mole Rat Gets Dressed: The Rock Experience,” directed by Kathryn Chase Bryer. The play is based on the children’s book by Mo Willems, who also wrote the script and lyrics for the stage production.

…a heart-warming and fun adventure for younger audiences…will send both adults and children home with a greater appreciation of the value of being yourself and accepting others for who they are.

The play begins with a roar, a scream, and a howl, as a live band of naked mole rats takes the stage and begins rocking out. The small cast played their parts with all the enthusiasm of AC/DC, fully living up to every rock ‘n roll moment of glory. I was greatly amused by the rats’ costumes by Eric Abele. The baggy, saggy, wrinkly “skin” (comprised of T-shirts and leggings) captured the appearance of naked mole rats. The headpieces, with the rats’ eyes, nose, and giant teeth were worn as a hat rather than a mask. The actors interacted with their rat heads throughout the show, which was quite fun to see. Their costumed feet were enormous. The moment when Wilbur (Harrison Smith) wiggles his feet into his pants and the toes flop all over was hilarious.

Lead Harrison Smith as Wilbur J. Mole Rat, Jr. is absolutely phenomenal. His tenor vocals are stunning and he soars on his high notes. His acting is also top-notch as he wrestles with his heartfelt desire to wear clothes—a notion not only shocking but repulsive to the other members of his colony. His three best friends—Tall Mole Rat (Kathryn Zoerb), Grande (Alana Thomas), and Venti (Steven Gondré-Lewis)—try to convince him to see the error of his ways. But is his desire really wrong?

This is the question with which the colony must wrestle. It’s easy to draw parallels to the sometimes heart-wrenching journey of LGBTQ+ children who may not only be afraid to come out, but find they are surrounded by a host of negative reactions ranging from disgust, shaming, and rejection—even to ‘love’ from supposedly well-meaning members of their community who believe that their path is wrong and try to force them back to conformity, all while assuring them it’s for their own good.

Heavy issues, but the play doesn’t directly speak to the obvious allegories. Due to the absurdity of the characters and good humor of the show, the play doesn’t become too intense for young viewers. In fact, the show is mindful of their target audience’s ages, even in the way that educational information is presented. Fun facts about the rats are introduced in a child-friendly way during the opening song and dialogue, notably that the rats live underground, like to dig, and are naked (without fur). As an educator, I was impressed that the facts were introduced in bite-sized chunks rather than in a manner that would go over the children’s heads.

Later in the play, a new vocabulary word is carefully introduced. With repeated and varied definitions (and then repeated over and over again), it ensured that the tiny learners would go home chanting “Proclamation!” with a full understanding of its proper use and context. Not only that, but during the mole rats’ ideological revolution, Grand-Pah (Russell Rinker) is careful to caution “if it hurts someone, don’t do it,” while encouraging “if it’s fun, get to it!” I’m sure that all the parents and guardians of the younger audience members appreciated that important balance of wisdom.

The songs composed by Deborah Wicks La Puma are delightful. As a rock enthusiast, I laughed at the slower rock ballad that began with a moody piano introduction. Each of the numbers nicely hits the mark—from a jazzy jingle (complete with “tap dance” acoustically performed behind the dancer with drumsticks on the floor of the stage) to blaring rock anthems. Not to worry—the volume is appropriate for both younger and older ears.

“Naked Mole Rat Gets Dressed: The Rock Experience” at Imagination Stage is a heart-warming and fun adventure for younger audiences, and their adult companions are sure to enjoy it as well. The show is a fantastic introduction to everything from a child’s first theatre experience to rock ‘n roll, and, of course, naked mole rats. It will send both adults and children home with a greater appreciation of the value of being yourself and accepting others for who they are.

Advisory: Recommended for children ages 4-10. Strobe lights are briefly used during the production.