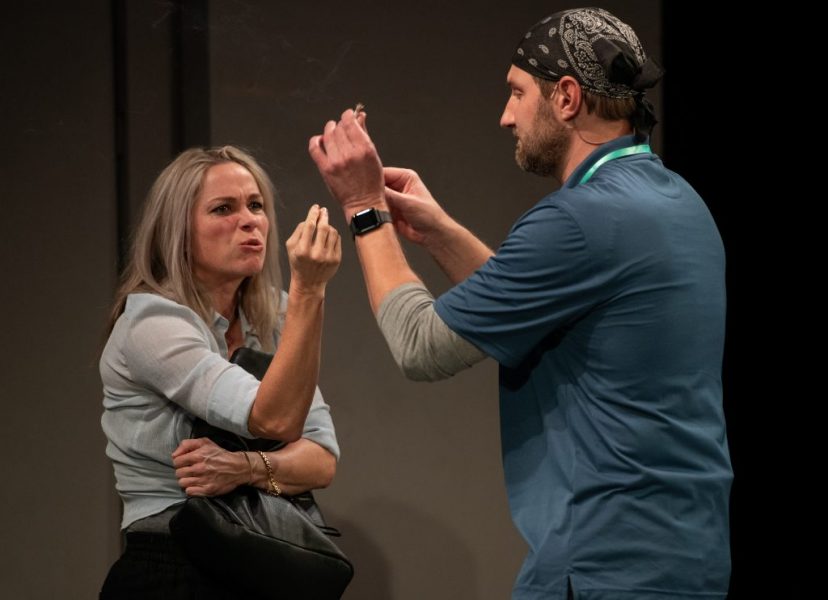 The actor playing Nina in a production of “The Seagull” trips over one line and forgets another. Her scene partner tries to cover for her. She stumbles through another line or two, then goes blank. Ambulance sirens are heard as the stage crew and medics rush the stage. This jarring scene opens Duncan Macmillan’s “People, Places & Things,” the first play directed by David Muse in Studio Theatre’s new Victor Shargai Theatre.

Both Kearse and Paulsen are riveting…the most realistic portrayal of addiction and the early stages of recovery that I have experienced in any medium.

Kristen Bush delivers a searing performance as Emma, a brash and intelligent woman who thinks she can use her acting skills and wit to skate through an inpatient recovery program and get the certification she needs to return to her acting work. Emma armors herself with both hostility and humor to keep the people trying to treat her from getting too close to her trauma. Bush is in every scene of the play, and must exude intensity and vulnerability throughout. It is a superlative performance.

Emma is countered by Jahi Kearse’s Mark, a sensitive fellow patient whose kind demeanor belies the many atrocious things he did to feed his own addiction before landing in the hospital. Jeanne Paulsen plays three women who become the focus for Emma’s ire as well as her need for approval—the doctor who can sign her out of rehab; the group therapy counselor who has seen angry and self-righteous newcomers like Emma so many times before; and Emma’s semi-estranged mother. Both Kearse and Paulsen are riveting, with their scenes with Bush often feeling more like battlegrounds than conversations.

The rest of the cast portray the other patients in Emma’s group. The group scenes sometimes sag a bit, running a little longer than feels necessary. The actors are all great, but Macmillan presents detailed backstories on each, even though some of the characters will never speak again except as voices in the crowd. One long group therapy scene, and a bit of redundancy in some of Emma’s arguments with Mark, are the only flaws in Macmillan’s otherwise airtight script.

The technical design of “People, Places & Things” is a character in itself, on a level rarely seen outside a Broadway spectacular. Bursts of sound and light (designed by Lindsay Jones and Andrew Cissna respectively), as well as fading and echoing speech effects, take us inside Emma’s mind. When the doctor shines a light into her eye during an admittance physical, bright lights ingeniously appear on the walls of the stage to signify how harshly the flashlight hurts Emma’s eyes. Changes to Debra Booth’s set take place with Emma still on stage, with the crew moving pieces around her as lights swirl, conveying her confusion about just where she is and what is happening to her.

When Emma criticizes the rehab facility as isolated from reality, Mark counters that it is the most real place there is. “People, Places & Things” is the most realistic portrayal of addiction and the early stages of recovery that I have experienced in any medium. It is honest and unrelenting—and scorns the maudlin tones and romanticizing of many works on the subject. It does not let up through an uncompromising ending that shows that while getting through the dark tunnel is possible, there is no such thing as being truly finished with recovery.

Run Time: Two hours and 30 minutes with one intermission.

Advisory: This production follows characters in an addiction recovery program. It contains depictions of drug and alcohol use, including characters’ return to use, and descriptions of self-harm and death by overdose.

“People, Places & Things” runs through December 11, 2022 at Studio Theatre, 1501 14th Street NW, Washington 20005. For tickets and more information, click here. Masks are required while in the performance space. Masks are strongly encouraged in all other areas of the building.