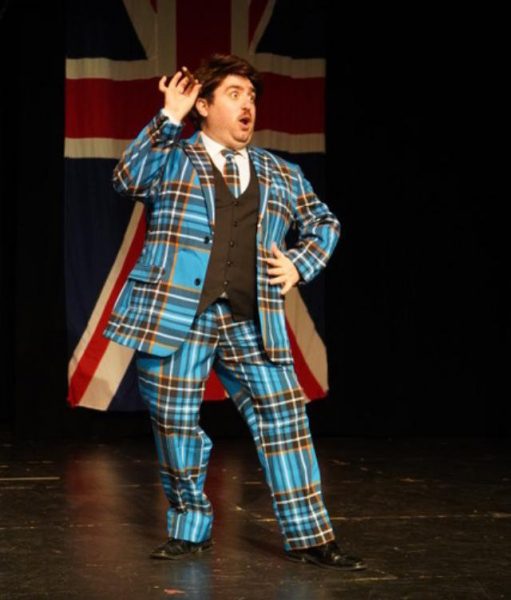 What happens when an intelligent, wonderful little girl is born into a family who learns everything they need to know from the telly? Something entirely magical. “Matilda the Musical,” the Tony and Olivier award-winning musical (based on the 1988 novel Matilda by Roald Dahl), tells the story of a girl who lives in her imagination since it’s so much better than the reality of living with her ignorant family. When she goes to school, she has the most wonderful teacher—and the most horrible headmaster. So, how can Matilda make the best of this situation?

Do not hesitate—go see ‘Matilda’ and you’ll be charmed by the kids, frightened by Miss Trunchbull, entertained by the Wormwoods naiveté, and enchanted by Miss Honey.

The show starts out with an amazing set full of British flags and a table set with gifts (props go out to Stage Manager Annmarie Pallanck). Kids pop out from under the table, singing how they’re “special little soldiers.” There’s an interesting juxtaposition of Snow White (Amy Haynes Rapnicki) at the party looking bored with a cigarette and a bunch of excited kids jumping around her, their parents all taking selfies with them. We can already see that this show is going to be entertaining.

In the next scene, Mrs. Wormwood (Alana Simone) is complaining to a doctor about how fat she’s getting and how she needs to get to the salsa championship. How can she not realize she’s pregnant? As she gives birth, the doctor (Eliyahu Kheel) sings into his stethoscope, and Mr. Wormwood (Tommy Malek) complains how his boy has no thingy. Throughout the show, he’s in denial that he has a daughter and continually calls Matilda “boy.”

When Matilda finally escapes from her family and goes to school, she sees the older children trapped behind gates as the younger children sing that they’re “special little soldiers.” Thankfully, she has Miss Honey (Maggie Stanley) as a teacher who embraces her intelligence and tries to get her moved up in school. But headmaster Miss Trunchbull (J Purnell Hargrove) won’t stand for that. She’s heard from the Wormwoods that “Matilda’s a real wart.”  Miss Trunchbull, a hammer champion, believes children should stay inside their circle all the time. Somehow, Miss Trunchbull has to be stopped—and Matilda knows she’s the one to do it. But how?

This show is incredibly entertaining with an extremely talented cast of kids and adults. McKenzie Nace is a perfect Matilda, so sweet but just a “little bit naughty” when she needs to be. Matilda’s parents are over-the-top hysterical. Mr. Wormwood (Malek) is the dad you love to hate in his loud, tacky blue plaid suit (props to costumes by Tara Hebert). He’s quite the character and Malek commands the stage when he sings “all I know I learned from telly” and “the bigger the telly, the smarter the man.” Mrs. Wormwood (Simone) is also hysterical, telling Matilda “it’s not normal for a girl to be out thinking” and telling her husband “dinners don’t microwave themselves, you know?” She also focuses on salsa dancing with Rudolpho (Eliyahu Kheel), in his obnoxious, gold lamé outfit and fake Italian accent, being loud, and getting rich.

J. Purnell Hargrove is an amazing larger-than-life Miss Trunchbull, towering over poor Miss Honey and any of the children who come across her path. She definitely looks like a hammer champion, with her wide belts and gray sweatshirt (again, props to costume designer Tara Hebert), and I’m glad I wasn’t anywhere near her since she was terrifying. The juxtaposition between Hargrove and Miss Honey (Stanley) is striking, as Stanley is dressed in pastel peach or violet with flowered dresses and is the picture of sweetness and light.

There is a lot of complicated choreography in this show, and the kids nail it every time. Props go to Jason M. Kimmel, Maia Vong, and Monique Erdos-Gertner for all those great dance moves. It’s amazing that the students are able to follow Miss Trunchbull’s complicated phys ed routine, even when she goes into double time.

Everything in this show is top notch. The set is a large brick wall with letters and boxes full of knickknacks which creatively becomes Matilda’s bedroom, the library, the gates of the school, and even swings for the kids at recess. As mentioned before, the choreography is incredible with the kids doing complicated dance moves totally in sync. The props enhance the performance, whether that’s the flashlights the older kids use to scare the younger ones, the old school television Mr. Wormwood talks about, or the vanity he uses to wash his hair. But most amazing of all is that the students seem like British schoolchildren with their perfect British outfits (again props to Tara Hebert), British vernacular, and their adorable accents. How could a bunch of kids and adults maintain a British accent throughout the show? Not really sure, but it’s amazing. (Since I lived in London for five years, I fully appreciate the costumes and accents!)

Do not hesitate—go see ‘Matilda’ and you’ll be charmed by the kids, frightened by Miss Trunchbull, entertained by the Wormwoods naiveté, and enchanted by Miss Honey.

Show time: Two hours and 45 minutes with one intermission.