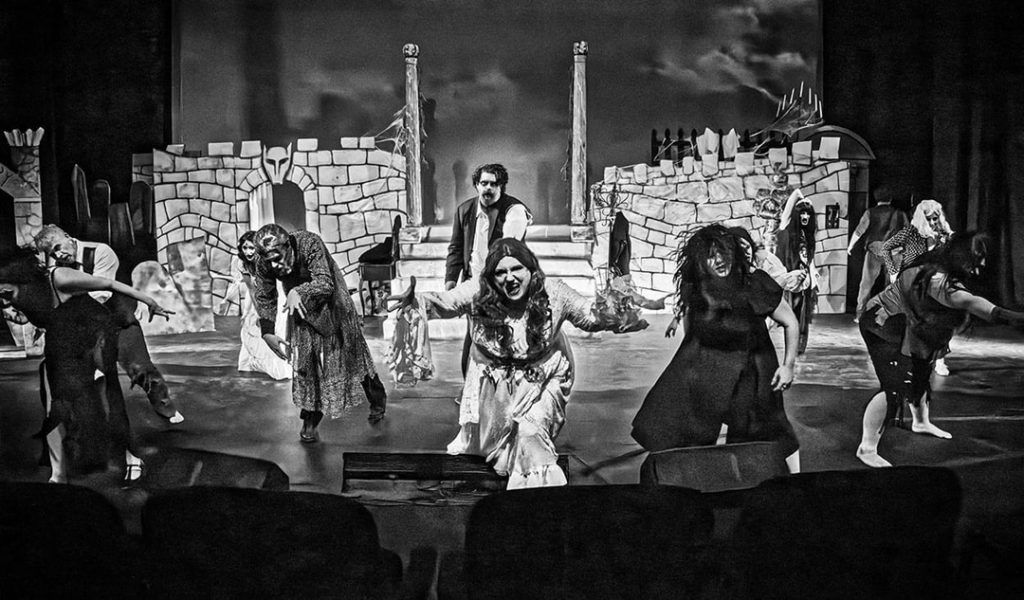 The piece is part-concert, part-celebration, part-parody, loosely connected by the story of a theatre troupe trapped in the haunted Sanger Theatre and the three young actors who try to free their colleagues. For its most recent offering, the players and their director, Lilli Burril, embrace the pastiche, pulling from the experiences and relationships created by decades of work by the various players, from Rogue Swan board members Katie Gordon and James Watkins, to the new faces of Harford and Cecil County community theatre.

The piece is also close to this reviewer’s heart. Harford Community College hosted a production of “Scream” in 2011 and was one of the venues that helped launch the fledgling Rogue Swan (“Unnecessary Farce” played at the college’s Blackbox Theatre in 2014).

You’ll be glad you engaged with this company and its one-of-a-kind productions.

In keeping with the collage of music, dance, and loose story, each of the songs is a self-contained reference to a particular icon, such as “Pure Evil” to “Nosferatu,” “Time to Hyde” to “Dr. Jekyll and Mr. Hyde,” or a sub-genre, such as “Babysitter Blues,” to slumber party, slasher films. Each song also moves the plot forward just enough to keep reminding the viewer that there’s a story being told, as the three featured youths, Jesse (Clutch) Hutchinson , Caleb Gordon (Caleb), and Marion (Moxie) Jackson, attempt to free themselves and their fellow actors from the cursed stage. Among other moments, Jesse and Caleb fear for Moxie as the damsel in distress in “Kong” or save Will Conway before ultimately sacrificing him to save the rest of the troupe.

Throughout the display of B-horror movie send-offs, there are special moments and inside references to friends (from cast members to the great Leatherface, may Gunner Hansen RIP) to elements of horror, new and old. A lengthy and hilarious argument precedes the first slasher song, “Bloodfeast,” in which The Count (Jimmyo Burril) admonishes Caleb and Jesse that the legend of a special, blood spatter effect was a marketing gimmick. Amusing references to classic horror, such as “The Count is silent” or April Monique surfacing in the pot and begging not to be cooked by “All Them Witches,” add just the right amount of tongue-in-cheek humor to this wild ride. This is a musical that can only be created by a family that has spent their lives in the trenches of the B-horror genre (The Burril’s are the masterminds behind “Chainsaw Sally,” among other productions).

There’s a shared aesthetic among the production team and cast brought together by director Lilli Burril. Matt Casarino’s band. Musical adaptations showcase the best singers (the virtuoso moments in “Even a Man” and “Pieces” are worth attending by themselves) and keep the music on track, even with the challenges of a large cast and variety of musical genres. Katie Gordon’s choreography fills the stage beautifully with every imaginable style of movement.

The production elements that include costumes by April Monique, lighting by Matt Coyle, and (one assumes) set/projection design by Jimmyo Burril, are appropriately reminiscent of first the black and white world of early Hollywood and then the starkly contrasting pastels of 60s slasher horror. With so much to design (from Dracula’s gypsies to Frankenstein’s monster and his bride), it’s doubly to their credit that nothing seems out of place in the buffet that is “Silver Scream.”

By the time this review is in print, the cast that proclaims ”Tonight We Live” will have returned their undead avatars to their “earthly beds” and this production will have already had its final performance.  Look for future offerings from Rogue Swan and if you can catch one, future productions of “Silver Scream.” You’ll be glad you engaged with this company and its one-of-a-kind productions.

Run Time: Approximately one hour and 50 minutes including a 20-minute intermission.