Theatre Review: Solas Nua’s ‘The Playboy of the Western World’ at the Atlas Performing Arts Center 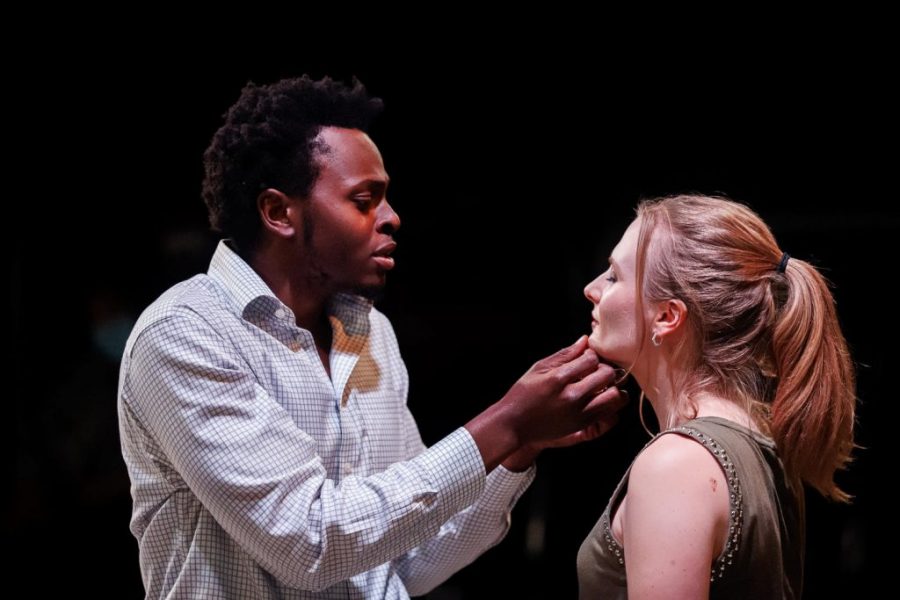 It is often said that it can be difficult if not impossible to improve upon the original. But with Solas Nua’s production of “The Playboy of the Western World” by Bisi Adigun and Roddy Doyle, they may have just pulled off the impossible. J.M. Synge’s original (1907) was intended as a comedy but one that wasn’t afraid to challenge convention. When first staged in Dublin’s Abbey Theatre, the play incited riots. And while Solas Nua’s version isn’t necessarily the stuff of riots, it certainly gets the audience thinking.

…it can be difficult if not impossible to improve upon the original. But with Solas Nua’s production of “The Playboy of the Western World”…they may have just pulled off the impossible.

Solas Nua’s mission is to “present work that is cross-cultural, representing today’s Ireland—a contemporary, globally diverse society,” and showcasing a diverse snapshot of contemporary Ireland is certainly on the agenda when it comes to this particular play. Adigun and Doyle bring the essence of Synge’s characters into the 21st century. Nigerian refugee Christopher Malomo (Jamil Joseph) is seeking asylum for a crime he thinks he committed. He finds himself in a Dublin pub owned/run by gangster Michael (Ian Armstrong) and his headstrong daughter Pegeen (Rebecca Ballinger). While on its surface, this may seem a play about escaping from the law (on more fronts than one), at its heart, Adigun/Doyle’s drama is really all about storytelling and the power therein.

Christopher “Christy” Malomo’s story involves the supposed murder of his father, an act for which he is seemingly applauded by everyone within the orbit of this pub. His story of the patricide however grows, evolves, and reshapes itself with every consequent telling, until the story itself becomes far more important than any supposed killing. Joseph has one scene in which he reenacts the fateful conversation between him and his father that led up to their “fatal” exchange. Incredibly well-staged, the actor’s comic execution and timing here are off the charts, as the character of Malomo offers an incisive commentary on the often blurry lines between life and performance.

Storytelling is not solely left to Malomo. The Widow Quin, riotously played by Jessica Lefkow (and brilliantly wardrobed by costume designer Danielle Preston), has a few stories of her own, making her character at once both dubious and endearing—a difficult theatrical feat. You truly have to applaud Lefkow here. In fact, you have to applaud all of the actors as the ensemble does a superb job of making the audience feel as though they are not only spectators but patrons at the pub. Ian Armstrong as Michael, head gangster slash pub proprietor, particularly manages to steal just about every scene he’s in.

Also adding to the participatory feel of this Irish pub is the hyper-realistic set by designer Nadir Bey. From the fully stocked fridge to the photos of a few select Irish icons (yes, Lord of the Dance’s Michael Flatley does hang on the wall), you definitely get the sense that you are invited in for the calamitous events to come. The traverse staging of the Atlas Performing Arts Center Lab Theatre certainly lends itself to a more casual environment, perfect for creating that “everybody knows your name” kind of vibe. In fact, at the performance I attended, one audience member actually hung their jacket on what was part of the set design.

Delaney Brey’s sound design helps bring some of the outside world in, while Sarah Tundermann’s lighting creates both intimate moments as well as a few more existential ones. All come together seamlessly under the inspired direction of Shanara Gabrielle.

In her Director’s Note, Gabrielle comments that the play is one that is laugh-out-loud funny while at the same time, on a more serious note, it compels people to ask themselves why they’re laughing in the first place. The production does tackle some rather controversial topics at times; in making Malomo a black refugee, Adigun and Doyle, some might say, go straight for the cultural jugular. At least for me, I left the theatre wondering about where agency truly comes from—the story? the teller? or is it the listener?

Running Time: Approximately one hour and 45 minutes with one intermission.

Advisory: Parental guidance advised. This play contains adult themes and language, as well as some explicit content that may be inappropriate for children.

“The Playboy of the Western World” ran from November 3-20, 2022 presented by Solas Nua at the Atlas Performing Arts Center, 1333 H St NE – Washington, DC 20002. For more information on Solas Nua and upcoming shows, go online. Masks were required for all ticket holders.