Theatre Review: ‘That Summer in Sumner’ at the Mosaic Theater Company 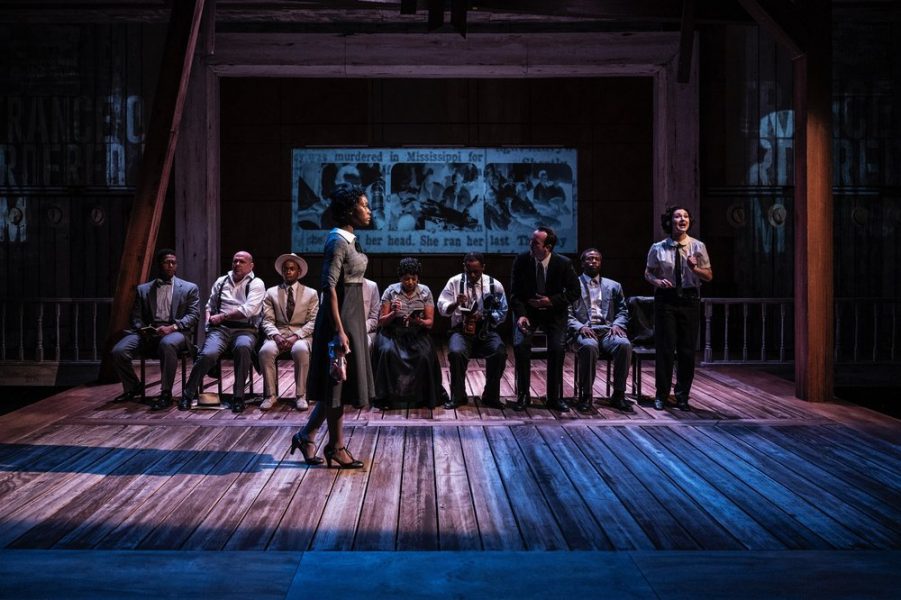 The cast of “That Summer in Sumner,” the second play of The Till Trilogy. Photo by Teresa Castracane.

The retelling of history has traditionally been told from the winner’s perspective. Without a true winner, the narrative is for the world. In the story of Emmett Till, there will never be a true winner but moments of truth within a group of people who did everything in their power to hide reality. Mosaic Theater Company’s world premiere of the production “That Summer in Sumner” is the second play in The Till Trilogy, written by Ifa Bayeza and directed by Talvin Wilks. This play follows the weeks after Emmett Till’s murder and the trial in September 1955. Bayeza’s approach is not only on the trial but the fight for justice by journalists wanting to tell the true story of Till and his family’s impact.

Woodard’s and the entire cast’s masterful performances are as compelling as the story being told.

The play begins with Emmett Till (Antonio Michael Woodard) retelling how his murder occurred. Similarly, to the previous production, “The Ballad of Emmett Till,” Woodard’s portrayal of Till still possesses innocence and childlike behaviors to illustrate how his youthful and joyous life was taken away too soon. The play continues with Till being a guiding voice for some of the characters, even during the trial. It reminds the audience and the world of who Emmett Till could have been if he had been given a chance. Woodard’s and the entire cast’s masterful performance are as compelling as the story being told.

The visuals for the play were as powerful as the story. The use of black-owned media outlets and their roles in fighting for justice is a beautiful inclusion. This gives insight into how the media has the power to tell a story that is for the people and not a corporation. Comparing multiple agencies during the 1950s allows the audience to see how Till’s story became important to the economy for certain publications and not about justice. To simulate the idea of news publications, there was the projection design by Mona Kasra of new headlines that filled the stage which were a great addition to the telling of the history. Wilks’ stage directions elevate the performance by creating images that were clean and profound. There were moments of visual beauty within a heavy narrative. Costuming by Danielle Preston not only reflected the setting, but the personalities of the characters.

The Till Trilogy does not have to be seen in order but each part of the story needs to be told. Mosaic Theater Company, Ifa Bayeza, and Talvin Wilks are eager to present this difficult event in our history with respect for the family of Emmett Till and other victims, past and present, who have been exposed to racial injustice in America.

Run Time: Two hours and 30 minutes with a 15-minute intermission.

“That Summer in Sumner” and the rest of The Till Trilogy will run through November 20, 2022 presented by The Mosaic Theater Company at Atlas Performing Arts Center, 1333 H Street NE, Washington, DC 20002. For more information and purchase tickets, click here.  Masks are still required in performance spaces and theaters, but masking in public areas such as lobbies is optional.