Theatre Review: ‘The Lifespan of a Fact’ at The Colonial Players 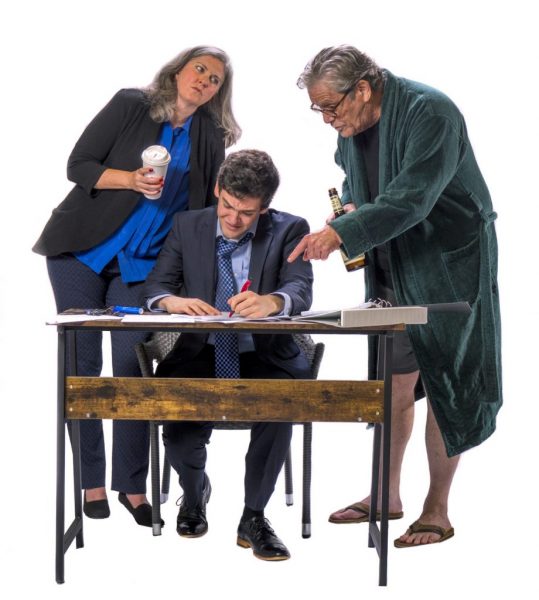 “The Lifespan of a Fact,” written by Jeremy Kareken, David Murrell, and Gordon Farrell is loosely based on a book by the two male leads, John D’Agata and Jim Fingal about their relationship. It also examines the evolution of the fact checking for the single true story of a boy who jumps off a building in Las Vegas.

The play has a seemingly simple plot. Emily Penrose, the editor of a New York magazine, has the story of a lifetime about a boy who commits suicide. The article is elegant, poetic and life-changing, and the only thing standing in the way of publication is a few days and a quick once-over from a fact checker. What could go wrong?

…an intense experience with beautifully-cast characters that grips you for the full 90 minutes without hesitation.

The train wreck in this story comes in the form of fact checker Jim Fingal, played by a twitchy, intense Matthew Rigby, a recent Harvard grad who is so self-assured and cocky about the correctness of everything he thinks that you want him to get his comeuppance the minute he walks on stage. Surely he won’t be hired! But Emily, played by Mary C. Rogers, is the embodiment of stress and ignores the clues before her because she has a deadline in a few days and she just needs it done.

D’Agata, played by Timothy Sayles, is the brilliant author of the story who takes poetic license with the facts to support the artistry of his writing. Sayles has the posture of a hard-lived life, self-assured, laid-back, and certain of his brilliance. He counts down other events of the day of the suicide like a Christmas fable: five heart attacks, four car accidents, two other suicides, and one hanging, blithely ignoring the fact that none of it happened the way he says. There was no hanging. There was no evidence of a car pile-up, but does it matter? Can truth be a matter of interpretation? Does it matter if you change unimportant facts to make a better story? These questions lead Fingal to track down D’Agata in Las Vegas to question him in person, soon to be followed by Emily who is trying in vain to save the story of a lifetime and go to press.

The interactions between the brilliant writer and the kid are strangely familiar. They are father-son, teacher-mentor, but no one is listening and nothing good is going to happen here. When Emily arrives to mediate a middle ground between the two, the three characters are like a dysfunctional family, sorely in need of therapy.

Emily knows she is at risk of being exposed for deceiving her readers. She knows trust in the facts of the story is the backbone of the magazine’s reputation, but surely they can bend the truth a little here and there…?

“The Lifespan of a Fact” is an intense experience with beautifully-cast characters that grips you for the full 90 minutes without hesitation. Director Estelle Miller does a terrific job of maintaining a fast pace and of making tension a character on stage, but luckily there is enough humor to keep it light. Edd Miller’s scenery is minimal and representative, but in the small intimate space of The Colonial Player’s theater, hardly any sets are needed to distract from the intensity of the actors.

“Lifespan of a Fact” runs through November 12, 2022 at The Colonial Players of Annapolis, 108 East Street, Annapolis, MD 21401. For tickets and more information, call the Box Office at 470-268-7373 or go online. Face masks will be required for all patrons at all times at the following performance Friday, November 11, 2022.