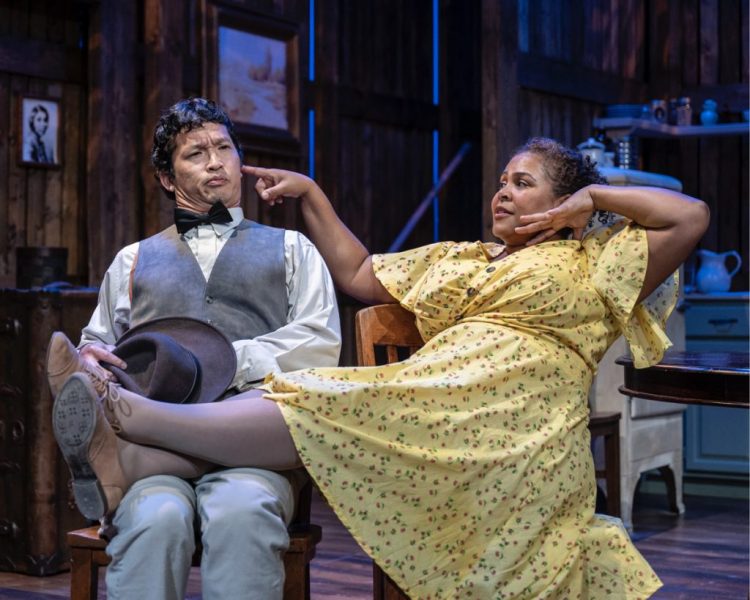 One of the issues when trying to bring an older play to the stage is that sometimes themes don’t quite translate, dialogue reads as irrelevant, and characterizations tread the slippery slope of being out of sync with the pulse of contemporary theatre. In 1st Stage’s production of N. Richard Nash’s “The Rainmaker,” the potential for such dangers is certainly there. Yet, the cast and crew instead manage to make audiences think about the more profound implications of this play and these characters as viewed through a 21st-century lens.

The true joy of this production was watching the ensemble cast do what ensemble casts do best—engage with one another as though they’d been doing it for years.

Admittedly, up to this point, my sole exposure to this play was one wrapped in a cheesy, albeit nostalgic, bow. Think big clunky TV set, shag carpeting, and the Fonz. Mrs. Cunningham’s community theater debut as Lizzie in “The Rainmaker” was in danger of being derailed in light of a #MeToo moment which in the 1970s was passed off as a sitcom-appropriate slap-on-the-wrist kind of lesson about “how men should not behave.” Fonzie eventually steps in as Starbuck saving the day—and the play.

Why this childhood memory segue? This is because the meta-commentary inherent in this Happy Days episode, and the issues that Deidra Lawan Starnes’ innovative direction of “The Rainmaker” seeks to tackle, aren’t all that different—as understood in 2022. Lizzie is “plain” and thus Lizzie requires the support of a cast of men around her just to function. Those are the glass ceiling perspectives that Lizzie, inspirationally played by Tamieka Chavis, is tasked with shattering throughout the drama.

Living with her father H.C. (Scott Sedar), patriarch of the somewhat dysfunctional Curry family, along with her two brothers, Noah (Vince Eisenson) and Jim (Jonathan Del Palmer), Lizzie is the cook, seamstress, and general “keeper of the hearth.” While this trio of grown men is quite content to have the benefit of Lizzie’s devoted labor, they are concerned about her future, particularly about her ability to find a suitable husband lest she becomes an “old maid.”

To complicate matters, the local Sheriff, File (Jacob Yeh), may or may not be interested in Lizzie, though he must first conquer his own demons before he can commit to anyone. Then of course there is Starbuck, a.k.a. The Rainmaker. Riding into town in something akin to a circus wagon, Starbuck (Matthew Sparacino) truly is a one-man show. Drought threatens to knock the legs out from under the Curry family farm, so H.C. takes a gamble on this by-all-appearances con man and pays the charismatic stranger $100 to make it rain. It would also seem that at least a couple of the Curry men have other ideas in mind for Starbuck—rent-a-husband perhaps?

The true joy of this production was watching the ensemble cast do what ensemble casts do best—engage with one another as though they’d been doing it for years. Add to that, Chavis’s ability to put an audience through its emotional paces—the scene in which Lizzie awkwardly struggles to employ the full arsenal of her feminine charm to seduce File is hands down the most enjoyable episode of this play.

“The Rainmaker” does on occasion tend to be a bit heavy-handed in its metaphorization of key themes—dreaming being central among them. Sparacino’s Starbuck works hard to make you believe in the power of dreams, while Eisenson’s no-nonsense portrayal of Noah stoically reminds that “drought’s a drought and dream’s a dream.” Seemingly, the playwright’s ultimate objective here is to get the audience to agree that a well-lived life is neither in those rainmaking clouds nor in the dry, dusty field of disbelief. Lizzie perhaps best sums up the play’s point when she says that maybe the ideal is somewhere between living in your dreams and living outside of them. The cast’s overall ability to seamlessly blend comedy and pathos speaks well to this “somewhere between.”

Navi’s sound design helps extend the dream vs. non-dream paradigm. The scene-transitioning music is fun, whimsical, and a bit dreamlike while the pervasive sounds of the farm hold audiences to the here and now. The set design by Nadir Bey makes clever use of 1st Stage’s space. Panels slide open to suggest more intimate spaces, i.e. the Curry’s tack room in which Lizzie experiences her first real kiss. Luqman Salim’s costume choices are just quirky enough without being overdone. All told, the various elements of this production under Starnes’ direction come together to ensure that audiences have everything they need to grasp the potential relevance of “The Rainmaker” to today’s world, while giving Mrs. Cunningham and the Fonz a run for their money.

“The Rainmaker” has been extended through December 18, 2022 at 1st Stage, 1524 Spring Hill Road, Tysons, VA 22102. For more information on upcoming shows, go online. Masks are required for all ticket holders.