Theatre Review: ‘The Sound of Music’ by 2nd Star Productions 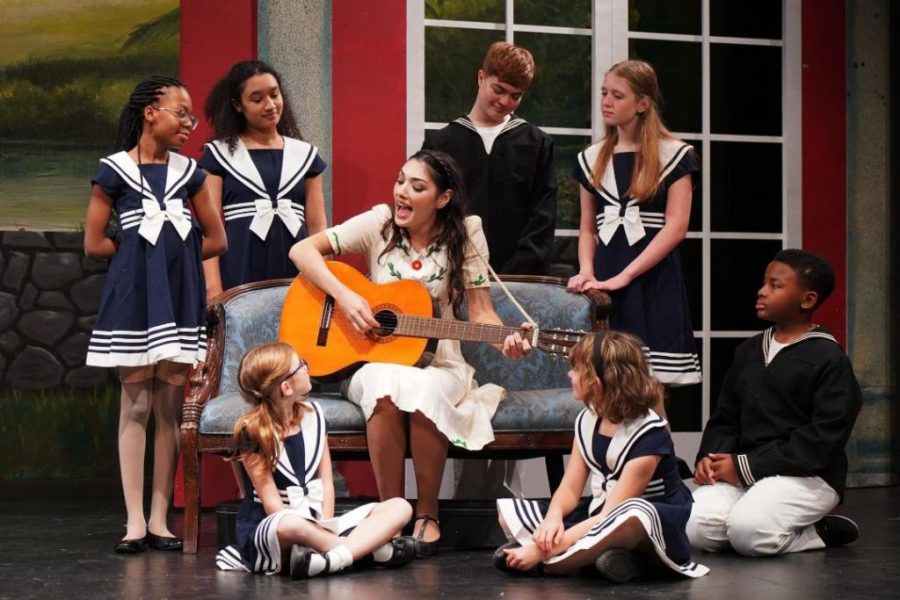 “The Sound of Music,” presented by 2nd Star Productions, is a strong version of this beloved musical. Directed by Kelsey Meiklejohn Bowen, it’s just the right classic treat for the holiday season, whether you’re from the pre-VCR generation when the movie was a staple of holiday television programming watched by the whole family; new to the production; or introducing a youngster to their first “Do-Re-Mi.”

…do yourself a favor and take yourself to see this family-friendly favorite in-person this holiday season. It’s definitely ‘Something Good!‘

The beautiful set drew me in before the play even began, with its towering abbey arches and absolutely gorgeous backdrop of mountains and lake by WATCH Award winning set painter and 2nd Star founder, Jane Wingard. The nuns’ opening chant perfectly complements the opening scene with its simple beauty. The moment when the single melody line transforms into full harmony was breathtaking. The nuns’ pure vocal tone and on-point pitch shimmered through the theater and gave a hint as to the extremely high quality of vocals that would be enjoyed throughout the entire evening.

Leela Dawson as Maria had quite the task to make her first onstage appearance alone and immediately perform a show-stopping number, but she wowed with her impressive delivery of the title song. Her tone was as crystal clear as the lake behind her and her vibrato was stunning. She amazed with her authentic yodels on “The Lonely Goatherd.” They were better than Julie Andrews’, and that’s saying something! Dawson is an extremely expressive singer, imbuing shifting emotions and boatloads of personality into every song that she performed throughout the show. Her acting talent matches her singing and she truly brings Maria to life—from her humble piety and her cheerful interactions with the children to her angst and despair over her love for the captain and her romantic moments with him.

Sargon de Jesus as Captain von Trapp impressed with his dark, velvety vocal tone and it was a treat every time he sang. I have to give him kudos for his acting as well, because in the Captain’s first scene with Maria, de Jesus was so chilly that I feared for any future chemistry between the pair. When he falls for Maria, he thaws into a warm, devoted partner which is a wonderfully sharp contrast to his original stern, whistling self, rendering the pair’s love story sweetly tender and believable. Another powerhouse vocalist was Mother Abbess Sarah Mitchell. Her richly trained voice rose as lofty and powerful as the mountain peaks in the distance in “Climb Ev’ry Mountain,” and she gave me chills on her high notes, especially when she unleashed into her full vibrato. Brava indeed!

Aubrey Anderson as Liesl von Trapp also has  beautiful vocal delivery. Mitchell is a rising freshman and vocal/musical theater major at Ithaca College, where she is sure to meet much success. Her acting skills were as good as her singing, especially her excited scream after she bravely pecks boyfriend Rolf (the warmly engaging Blake Martin) on the lips for the first time. Both Mitchell and Martin were fantastic in “Sixteen Going on Seventeen” and brought an adorable energy to their fun choreography. I was a little nervous for Mitchell’s safety when the seat of the garden bench flew up as she leapt off it. I hope it will be more firmly secured for future performances.

I especially enjoyed the scene-stealing duo of Max Detweiller (the hilarious Bryan Hargraves) and Baroness Elsa Schraeder (the droll Stephanie Bernholz Leuschner). Their onstage personalities could not be more different, and they played off each other to perfection. Elsa was the queen of high-society diction, overly refined amusement, and dry sarcasm, while Max was outrageously but endearingly manipulative, gregarious, and over-the-top. What a pair! It was such a treat that the stage version gives them songs of their own to perform whereas the movie version doesn’t, because I couldn’t get enough of these two.

The von Trapp children all did a fantastic job, particularly Risa Gabriel as Brigitta and DeMarcus Tanque as Kurt. Their humorous delivery of choice lines had me in stitches. Noam Siegal as Friederich, Jillian Sank as Louisa, Lillian Mae Jackson as Marta, and Grace Wenzel as Gretl also brought strong performances and were highly enjoyable to watch throughout the entire show.

I highly recommend “The Sound of Music” as a very well-done production with high-quality vocals and acting. If your only experience with “The Sound of Music” is the movie, do yourself a favor and take yourself to see this family-friendly favorite in-person this holiday season. It’s definitely “Something Good!”

“The Sound of Music,” runs through December 17, 2022 presented by 2nd Star Productions at the Bowie Playhouse, 16500 White Marsh Park Drive, Bowie, MD 20715 (in Whitemarsh Park). For more information and tickets, please click here. COVID-19 POLICY: Audiences members must remain masked while in the Playhouse, and vaccination is strongly recommended.