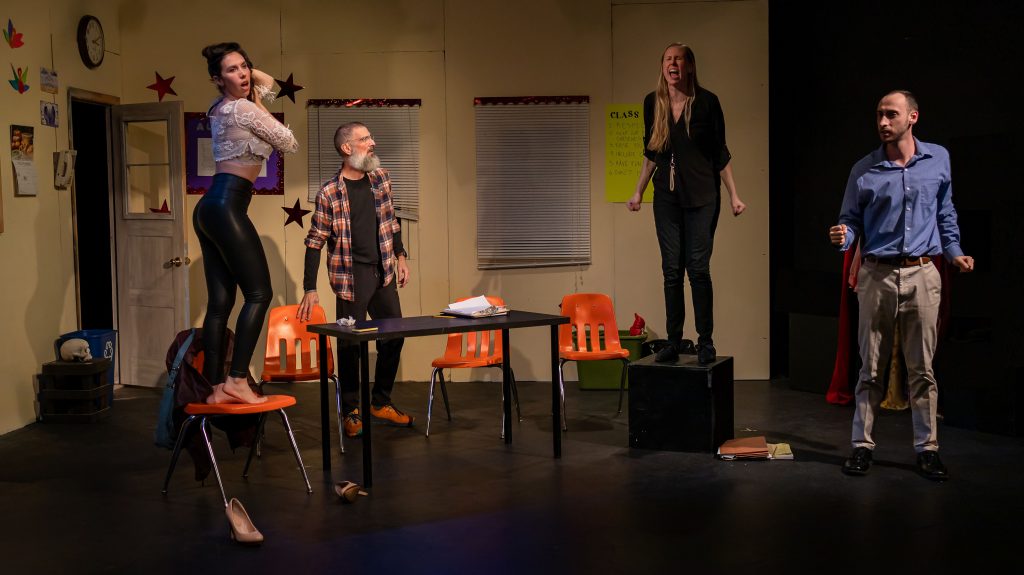 “Four white people can’t do a Thanksgiving play that doesn’t p*ss off the funders, or the parents, or the universe.”

In a minefield, no movement is safe. When movement is the stated priority, risks must be taken. But when safety is the overriding ulterior motive, paralysis is inevitable. The real trick, then, is to virtue-signal one’s stasis just enough to sidestep the original challenge while getting paid for it anyway. The dog in the meme says “this is fine,” and may well mean it, as long as the statement is accompanied by a wink towards some “meta” notion of irony. That’s the setup behind Larissa FastHorse’s popular satire, “The Thanksgiving Play,” currently appearing at Fells Point Corner Theatre and directed by Brandon Rashad Butts.

Butts’ direction is incredibly tight…FastHorse sneers so giddily at the one-upsmanship of liberal self-immolation that one can’t help but laugh along with her.

FastHorse has assembled a quartet of hilariously flawed theater-makers who stumble through an attempt to devise a Thanksgiving play for an audience of second-graders. Thanks to a plethora of grant funding, and their own overwrought cultural enlightenment, the four must create a piece of theater that addresses contemporary needs of equity and representation. But their bungling earnestness and scattered agendas leave them stuck. Their resulting journey is as deadpan as “This is Spinal Tap” and as cringeworthy as “Waiting for Guffman.” One isn’t always sure just what the windmills are here, but FastHorse takes heavy aim regardless.

In charge of the project is high school drama teacher Logan (Barbara Madison Hauck). She is a nervous, conscientious vegan who’s not thrilled at the prospect of helming a play about the “holiday of death,” but nonetheless holds a death-grip on this one chance to save her career. Logan’s boyfriend, Jaxton (Kingston Bowen), is a self-styled “actor and yoga dude.” They are joined by mansplaining historian Caden (Nate Krimmel) and super-ditzy professional actress Alicia (Chara Bauer). Alicia was hired on the strength of her “Native American headshot” and a misunderstanding regarding ethnicity. She’s unfamiliar with the concept of devised theater, and picks up her belongings to leave the first rehearsal, stating “I’ll come back when there’s a script.” Logan offers “Well, actually, the devising is meant to empower the actors,” and Alicia changes her mind when she learns that she “gets paid extra for empowerment.” Caden is hell-bent on delivering a historically truthful account of genocides, while putting quite a bit of energy into nitpicking over inaccurate terms like “pilgrims.” Along the way, he also takes a shine to Alicia, who manages quite unwittingly to be the smartest and dumbest person in the room at the same time.

Hauck’s portrayal of Logan reads like a voyage of never-ending desperation. Her flustered tics and exuberant panic manage to peg the needle for the full ninety minutes of this play, with the possible exception of a funny scene she shares with Bauer, as Alicia tries to teach Logan how to achieve simplicity: “Sometimes I study the ceiling. Nobody bothers you when you study the ceiling.” Bauer is brilliant as Alicia, playing her as two-dimensional as possible (which, ironically, is not easy). She tosses in the odd Jane Mansfield giggle as skillfully as she tosses her hair, and is utterly convincing in delivering a character who knows exactly who she is and is completely content.

When not meditating or “yes and”-ing, Jaxton does his darndest to help Logan center herself: “Stay in this moment,” he urges. “But this moment sucks!” is Logan’s reply. Bowen does phenomenal work, selling extremely high stakes as his character tries to out-ally everyone. Krimmel, as Caden, is less jittery. His role calls for high aspirations and urgent desires, all of which he delivers. There’s a pivotal discovery as Caden appears to have written a Thanksgiving sex comedy(!), which serves as just another stone on the path.

Butts’ direction is incredibly tight. He pumps up the zaniness, and the effect is that nobody has time to overthink the action or its messages in real time. Bernard Johnson’s set is a very cute combination of a semi-dilapidated public-school classroom with a thrift-store-quilt of a curtain, filling a proscenium that’s festooned with a self-mockery of show posters. Sound design by Heiko is a gorgeous, one-note joke of sorts, mimicking with rich precision the soundtrack to our favorite “Peanuts” television specials. If he didn’t use the actual Vince Guaraldi Trio, he crafted a remarkable facsimile.

On one of its many levels, “The Thanksgiving Play” is a treasure trove of inside theater jokes that is reminiscent of Daniel Sullivan’s “Inspecting Carol.” The play is sneaky in how shallow the humor appears, while skewering so many different archetypes. It trades in the victimization of privilege, sure, but in doing so it takes the next logical (and absurd) step, by fetishizing victimization itself. FastHorse sneers so giddily at the one-upmanship of liberal self-immolation that one can’t help but laugh along with her. The only landmine for the audience is being caught laughing alone.

Running Time: 87 minutes with no ntermission.

Advisory: Profanity and sounds of gunshots.

“The Thanksgiving Play” runs through December 4, 2022 at Fells Point Corner Theatre, 251 South Ann Street, Baltimore, MD 21231. Tickets are available online. Masking is required while inside the theatre when not actively eating or drinking.