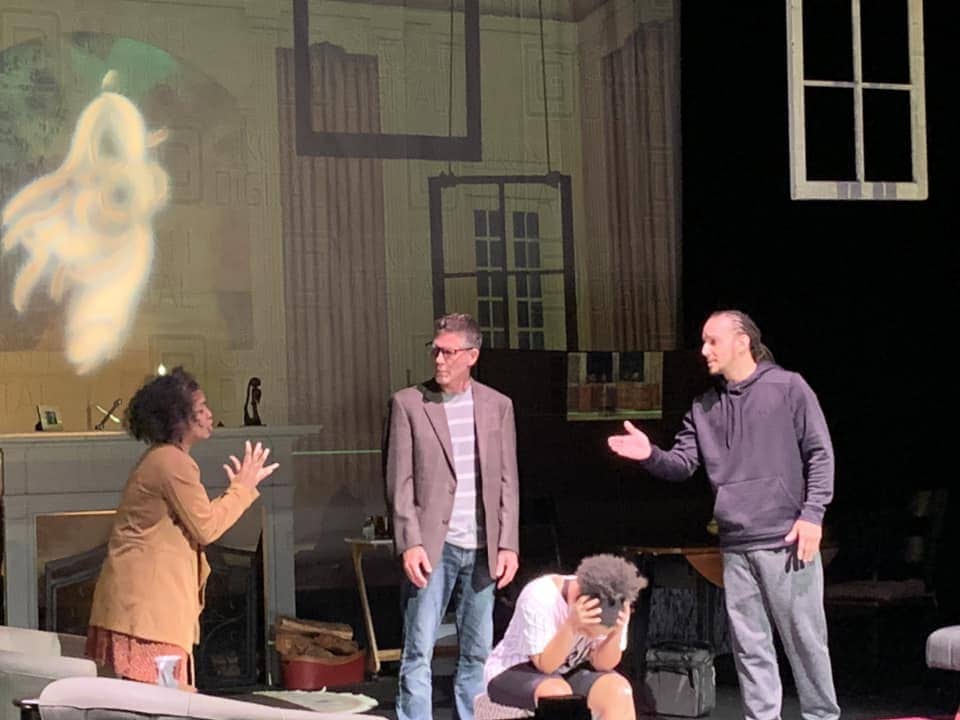 Bless ji Jaja’s new play “The Window King,” a Live Garra Theatre production closed its run thi spast weekend at the Silver Spring Black Box Theatre. It seems to take its cue from a number of theatrical traditions. Blending speculative elements with haunting realism, and even presenting a tension-relieving burst of physical comedy by way of an actual boxing match between the two principal characters, the play depicts a journey of self-discovery fraught with some tragic overtones.

Whiteside’s direction handles an array of structural nuances to a satisfying end, and you leave the theatre with the distinct sense that you know these characters, only wishing that you could see how their lives continue to unfold from here.

From the opening scene—where Mechelle (Brittney Dubose) projects a highly relatable mixture of frustration and anguish because she doesn’t know the whereabouts of her partner Evan (James Curtis Bowers), who apparently has been MIA for a couple of days—we get a glimpse into the tenuous inner life of a relationship on the brink. But on the brink of what exactly? This seems to be the fundamental question which both the writing of Jaja and thoughtful direction of Wanda Whiteside seek to answer throughout the drama.

On the brink of a breakup? Perhaps. Yet, their happier scenes are just that—moments of what seems to be genuine love that could potentially have a real chance. Dubose and Bowers do a very convincing job of portraying a couple that, despite the hardships, somehow manages to find their way back to whatever it is that makes them work. On the brink of forever maybe? Though early on we discover that Mechelle aborted their child, prompted by Evan’s insistence that he just wasn’t ready to be a father. Her resentment at having made this choice underscores much of her dialogue throughout the play. Or it could be that the couple is on the brink of figuring it all out—whatever that might look like. The play’s ending however (without giving anything away) may just beg to differ.

The relationship between Evan and Mechelle does, on occasion, take a back seat to the eponymous and strangely reassuring set element: the window of the couple’s apartment. In that window looms an image of the Virgin Mary and child. This image having appeared, we gather, shortly after the aforementioned abortion, has attracted all kinds of attention. Repeated knocking on the couple’s door and references to a crowd gathered outside suggest the makings of a mini “Our Lady of Lourdes” event, though the play stops shy of diving into full-on religious territory, instead focusing on the healing power of this apparition.

While Evan is dismissive of this lingering window Madonna calling it a Rorschach ink blot, others are definitely not. The entrance of paranormal investigator Donnelan (Todd Leatherbury) gives a comic, albeit perhaps too lighthearted, turn to this mystery. Donnelan reads a little more Ghostbusters than the overall tenor of the play can support (in fact, during intermission the oh-so memorable “Who you gonna call?” lyrics blasted). Leatherbury’s humor, though, does prove to be a relaxing counterpoint to the far more intense performances of the rest of the cast.

We also meet Victoria Hierra, (Nadia Palacios) a mother desperate to save her hospitalized daughter. Victoria believes that Mechelle is the key to her daughter’s recovery, but a still raw and traumatized Mechelle refuses to accept that she is someone who has the power to heal. “I take life,” the devastated character repeatedly explains. Palacios also has a turn here as Evan’s mother. The parallels are purposeful.

“The Window King” may try to play with structure a bit too ambitiously at points, though what falters somewhat in trajectory generally gets pulled off quite well in execution. Whiteside’s direction handles an array of structural nuances to a satisfying end, and you leave the theatre with the distinct sense that you know these characters, only wishing that you could see how their lives continue to unfold from here.

Running Time: Approximately one hour and 40 minutes with one intermission.

Advisory: Parental guidance advised. This play contains adult themes and explicit content that may be inappropriate for children.